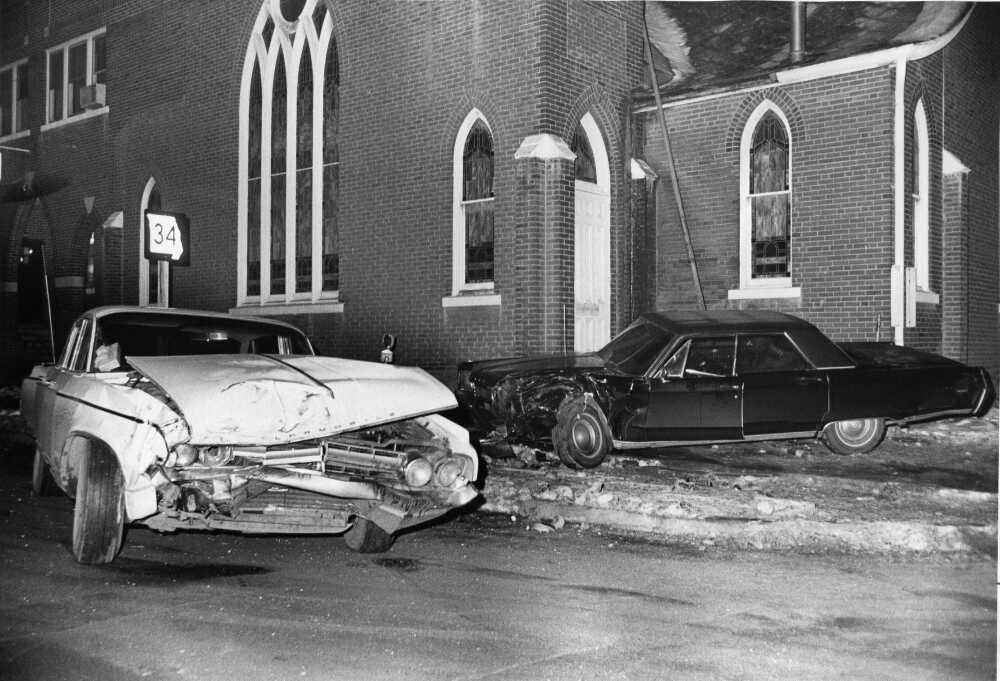 Six weeks ago, a flagpole, traffic signal and illuminated sign stood where this darker car sits following an accident Wednesday night at Police Headquarters. However, a succession of traffic crashes have left very little of any of them. Police reported a passenger and the driver of the darker car suffered injuries. (Bill Hampton photo)

You wouldn't believe it could happen, but it did at Police Headquarters Wednesday night.

A traffic accident finished what remained of the Police Department's flagpole, traffic signal and illuminated sign on the southwest corner of Sprigg and Independence even after a car had run up the flagpole Tuesday night.

Now nothing is left other than a twisted, badly bent pipe which once took electrical wires to the lighted sign.

Officers recalled traffic signals have been on the corner for years and have never been seriously damaged before.

The accident Wednesday, the second in two days and third in six weeks, broke the bent flagpole, also bent the electrical pipe and shattered the traffic signal's concrete mount.

This crash was more serious than others, leaving a passenger and driver of one car with injuries.

He was a passenger in a car driven by Chester E. Pearman, 31, of St. Louis who was treated and released at St. Francis Hospital for a head injury, police said.

Mr. Pearman told police he saw the traffic signal turn yellow and tried to stop but began skidding. After the collision, the Pearman vehicle slid sideways, jumped a curb and went onto the corner.

Police did not charge either driver.

The first accident involving damage to equipment on the corner occurred Dec. 6 when a tractor-trailer truck cut the corner too sharply and downed the signal and light.

Then, police moved the light over the main entrance, and had parts ordered to repair the signal. However, a truck struck a car Tuesday and it skidded toward the station only to be stopped by the flagpole.

Police say they don't have any idea why the intersection has become so accident-prone lately.

But one thing is for sure, unless motorists start trying to knock down the station, which is quite possible, they won't get anymore tries at the corner.

The building was formerly Grace Methodist Church. It became the city's police headquarters in 1960. The present police station was built across the street at 40 S. Sprigg St. in 1976. The old building was razed and the current Fire Station No. 1 was built on the site. 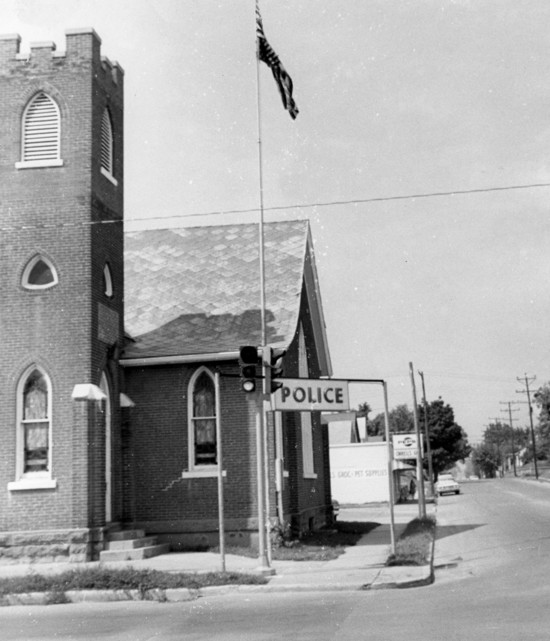 Although long used as a church, this brick building at Sprigg and Independence streets has proved ideal use as the Cape Girardeau police headquarters. (Missourian archive, Jan. 8, 1960)