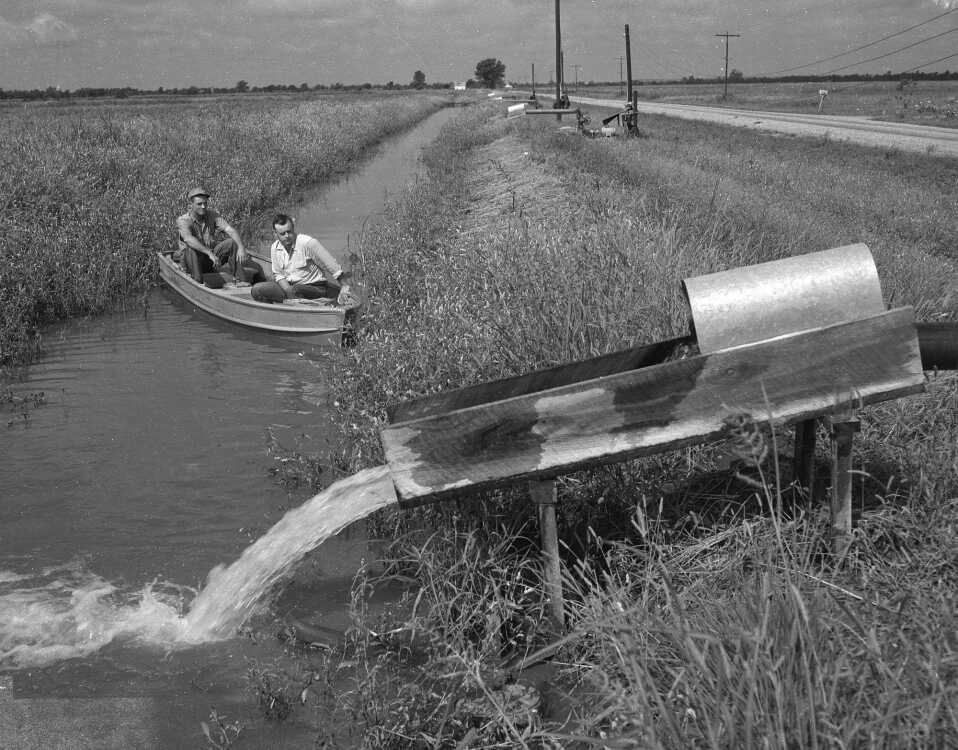 Carol Messmer saw this photo by G.D. Fronabarger in Mystery Gallery #5. She shares this information about it:

"George Stephenson, seated in the stern of the boat, is shown with an unidentified man on the waterway of the rice fields three miles east of Highway 77 in Scott County on the Baseline road. Daily rounds included inspection of waterways and chutes that were opened and closed to control the flow of water to the rice fields.

"Mr. Stephenson along with Clem Ranson grew the first rice in this part of the state. Ranson farmed 130 acres of rice while Stephenson farmed 80 acres. According to Mr. Ranson, the pumps ran continuously for 3 1/2 months of the growing season. The December 1954 Rural Co-op paper featured the two men and their operation. They harvested 100 bushels of rice per acre that year. In addition they had their own electric air-type drying system to dry the rice, on site. The rice they produced was later sold as seed rice for other farmers.

"Clem was my father (mother Inez) and we lived 2.5 miles from the rice fields. George and his wife, Reba, lived across the road from the fields on the Baseline road." 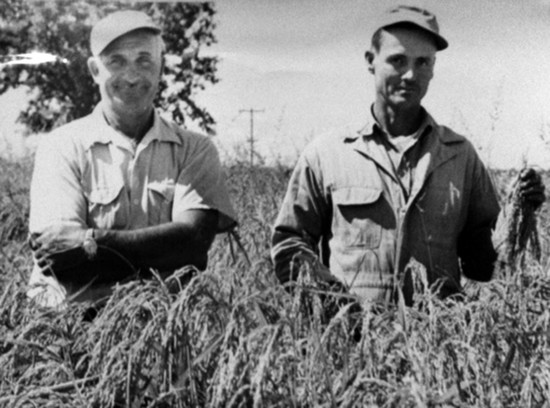 Carol Messmer provided the photo above of Clem Ranson, left, and George Stephenson standing in the ready-to-harvest fields located on the Baseline road, four miles east of Kelly High School on Highway 77. It was taken in 1954.

G.D. Fronabarger took several photos. The story below refers to other pictures. One person is identified as Ray Mills, the man in the boat with Stephenson.

Rice, on Farms East of Benton, Due to Have High Per Acre Yield

Rice, another of the many crops adaptable in southeast Missouri, is fast finding its place here and bids fair to become a major crop, this facilitated by the abundant irrigation possibilities.

These photos were made along the Northcut drainage ditch, east of Highway 55 between Benton and Charleston, on the farm owned by Frank A. Bridge of Springfield, Ill. There are 220 acres in the tract, a part of which is shown in small photo, 50 acres at another place and 130 acres on the adjacent Paul Vandivort farm.

A series of pumps, six in a row, bring in water from the Northcut ditch. R. E. Mills of Foley, who manages the acreages, is shown standing back of the outlet and his son, Ray, is at the right the pump valve. These pumps deliver around 1400 gallons per minute and their intake hasn't phased the level of the ditch. Water stands on the paddy from 6 to 12 inches in depth. In a little more than a week from now, the paddy will be drained, the grain allowed to ripen and then it will be harvested with combines. Mr. Mills estimates the yield from 100 to 120 bushels per acre.

The rice, of the Cody and Zenith varieties, was developed at the University of Missouri experimental farm at Elsberry, where Mr. Mills had charge of growing the crop since 1928. It has been certified and will be used entirely for seed.

Mr. Mills has been raising rice since 1922 in bottom land around Elsberry. The experimental work began six years later and he has been with the university since then. The federal Department of Agriculture also has a part in the Elsberry work.

Once each week Mr. Mills comes to the Bridge and Vandivort fields. The rice was sowed in April and will be harvested soon.