Cape's arch that never was 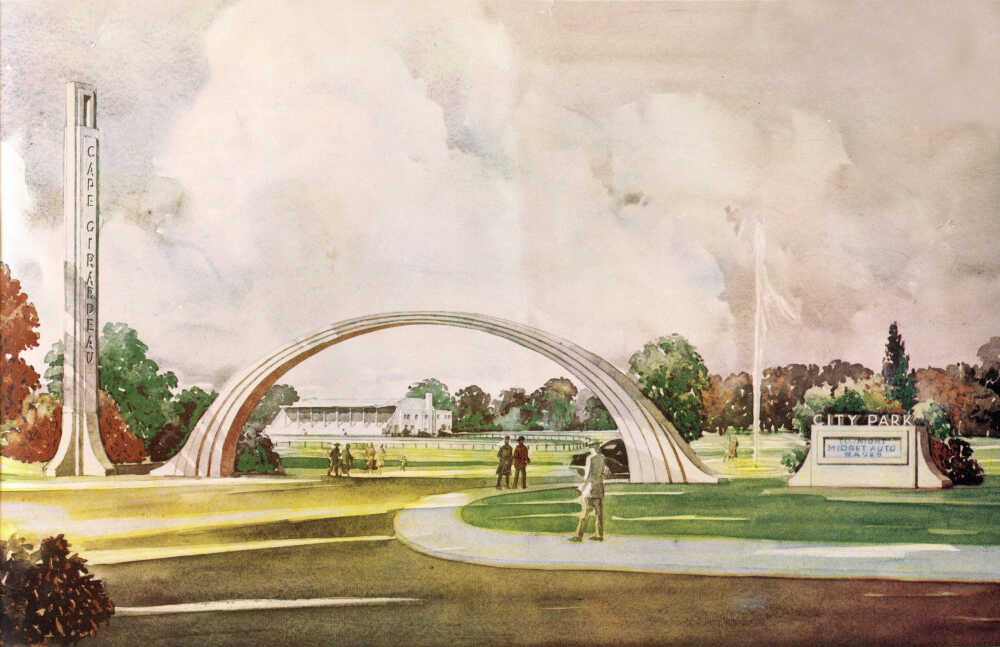 An architect's suggestion for a development on Highway 61 that will impress upon passersby the fact that Cape Girardeau's new park combines beauty with utility, that this is a cultural community, an educational, commercial, and residential center of a great district, where the citizens take pride in their property and want their city to be clean, wholesome and beautiful. This suggestion for an entrance is a challenge to the citizenship for 1941.

(This lithograph is a product of the art, engraving and printing department of the Missourian Printing and Stationery Company made from a water color sketch by architect Hal Lynch.)

The Arena building, largest WPA project of the kind in Missouri, contains an auditorium that will seat more than 3000 people, and has a large stage, dressing rooms, dining room and kitchen, numerous committee rooms, modern heating plant and everything necessary for community purposes.

A $55,000 bond issue paid for the 50 acres of land and provided the sponsor's share for the WPA project. More than $300,000 has been invested in buildings, landscaping and planting, fencing, lighting, roads, etc.

Early in 1940 General Evangeline Booth, of the Salvation Army, came to Cape Girardeau for a district meeting. It was the first general meeting in the building and more than 2500 people were seated. The building and park will be available for general community activities.

The grandstand seats about 3000 people and the schedule for 1941 calls for bleachers to accommodate at least 3000 people, lighting equipment so night activities of all kinds can be held, more paved roads, sidewalks, etc.

In this previous blog, the Arena Building is under construction.

In this previous blog, Gen. Evangeline Booth speaks at the Arena Building.

What became of the plans for the new entrance to the park?

Just what 1942 holds for the fair is not certain at this time, due to the war situation, but plans have been made, in lieu of future developments, to hold the fair again next fall. The fair board feels that with its present assets of equipment and cash it will be able to improve the exposition from year to year. Most of this equipment is of the type which will not have to be replaced for some time.

Several suggestions were made at the annual meeting for improvement of the new city park where the exposition is held. One is a permanent fence around the tract, another is to secure an outlet from the south side of the park to Highway 61 to facilitate traffic movement. The association hopes to eventually get additional permanent buildings for housing livestock, and to build a proposed ornamental entrance on Highway 61. Improved facilities for handling of livestock are to be worked out by the board during this next year.