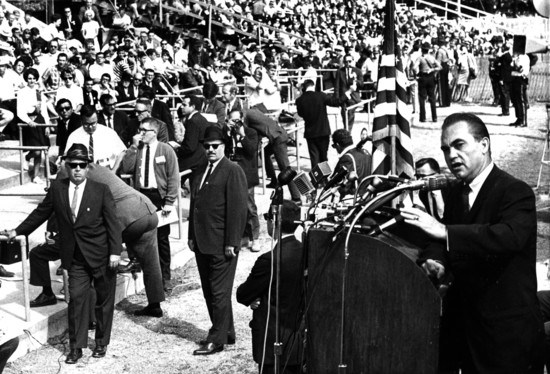 Former Alabama Gov. George C. Wallace brought his third-party candidacy to Cape Girardeau Wednesday, Sept. 18, 1968 and addressed a large enthusiastic crowd at Arena Park. Here, Mr. Wallace tells the grandstand crowd what he would do as president while security officers watch, reporters take notes and photographers snap pictures. Facing the camera in left foreground are Scott County Sheriff John Dennis, left, and Arthur Bruce, Sikeston chief of police who were here as part of the extensive security given to the candidate. (Associated Press photo by Fred Waters) 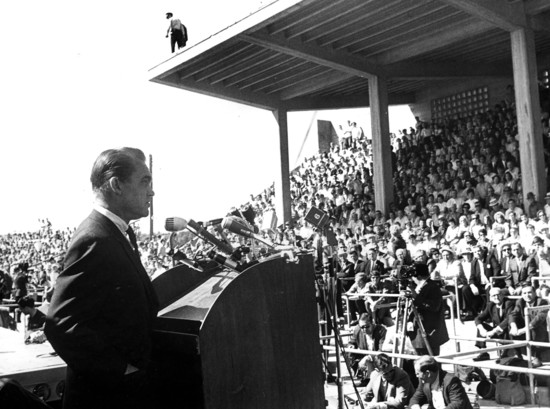 The stands at Arena Park were packed as former Alabama Gov. George C. Wallace addressed his area audience this forenoon. They greeted his comments with shouting and applause. Security was tight during the visit. Note Cape Girardeau police officers atop the roof of the grandstand. (Photo by Bill Hampton) 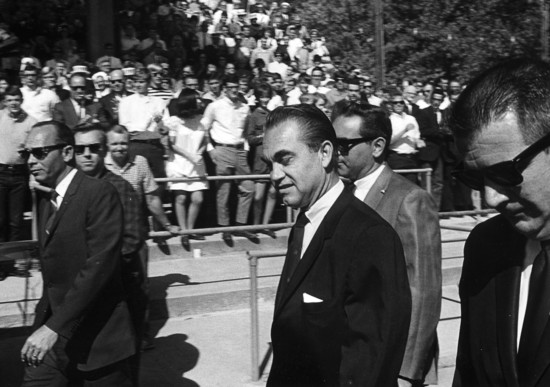 An enthusiastic, cheering crowd heard George C. Wallace, third-party candidate for president, tell them at a rally in Arena Park this afternoon what they apparently wanted to hear: that they, the people, are the important movement in this country.

He enlarged upon his remarks by saying that if elected president he will return to the people the right to control their schools, their children, certain aspects of the labor unions and their properties.

Throughout his talk, often interrupted by loud applause, and, at times, standing ovations, Mr. Wallace appealed to the individual voter, while at the same time, assailing the newspapers in general.

"But not all the newspapers," he was careful to remark.

The audience, conservatively estimated at 6,000 persons, was comprised of persons from over the Bootheel area, considered a key section in the overall state political picture.

A count might have shown the crowd was made up of two women to every man. There were many youths, come from high school government classes over southeast Missouri. Others were apparently of college age.

There were also Democratic county office holders in the audience, possibly assessing the reaction of the group to the presidential contender's remarks.

Many straw hats bearing Wallace bands were seen, and one large Mexican sombrero also had a Wallace hatband.

In his opening remarks, Mr. Wallace said, "We are now on the ballot in all 50 states. This movement is not sectional, it is national."

He said he now feels he will get a little more than the needed 270 electoral votes as the American Independent Party candidate for president.

"And this is shaking the leadership of both parties--Democrats and Republicans."