Voting at the swim pool 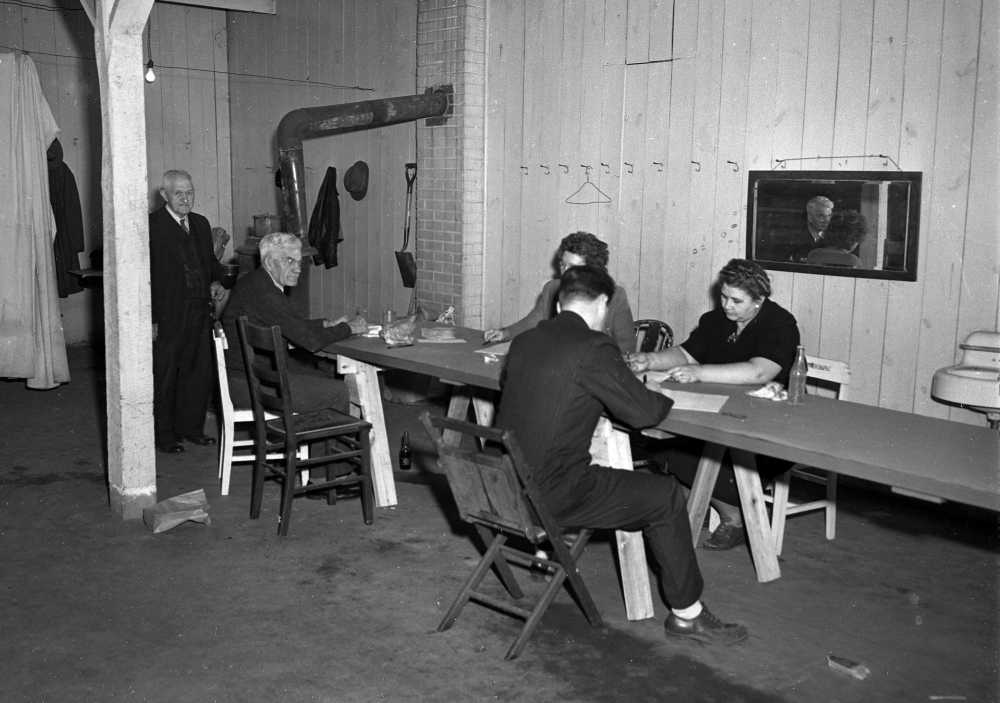 The heaviest vote in the election in Cape Girardeau Tuesday was cast in Ward 4, at the Fairground Park voting precinct, where the facilities were the poorest in town. The polling place is located in the swimming pool dressing room quarters, heated only with a stove which “burned up” those nearest it and left the others freezing. Due to cold weather troubles, there are no sanitary facilities in the place, and the concrete floor is cold and damp. The job of staying for more than 13 hours in the place and looking after the votes of the 632 people who balloted there was that of those shown in the picture above. (G.D. Fronabarger/Southeast Missourian archive)

Transfer of the polling place in Ward 4 from the swim pool in Capaha Park to the Franklin School has been suggested informally to the school board, and if it is officially brought up by the county and city will be given due consideration, it was learned today.

The Capaha Park polling precinct has drawn criticism of judges and clerks of election for some time, as well as that of voters in Ward 4, usually one of the largest voting wards in the city.

The precinct is in the swimming pool dressing room, served during cold weather by only a small stove which is hardly adequate to heat the structure. The drafty concrete floor and the heating system have drawn numerous complaints. Also there is no means of separating the counting judges from the other officials and this within itself does not comply with law.

The board has taken no official action on the suggestion, but Supt. Louis J. Schultz said that if the city and county should make a request for the use of Franklin School, he felt sure that board members would give due consideration to the proposal.

Transfer of the polling place to Franklin School will be recommended by the chairman of each party committee, they said today.

James A. Finch Jr., of the Republican committee and Lindsay W. Simmons of the Democratic committee said they would be glad to suggest to the county that the change be made.

The picture above was taken by G.D. Fronabarger on Feb. 24, 1948 at a special election to decide whether the city of Cape Girardeau would adopt a city manager form of municipal government.

According to the story in the Southeast Missourian published the next day, voters turned down a proposal to substitute the new plan for the existing 30-year-old commission form of government.

The vote was 2349 against the proposition to 1301 in favor of the switch. The heaviest vote was cast in Ward 4 at Capaha Park with 351 against the change to 281 in favor.

Voters finally approved the change in 1965. Paul F. Frederick was sworn in as the first city manager of Cape Girardeau on Jan. 3, 1966. It became known as the council-manager form of government.