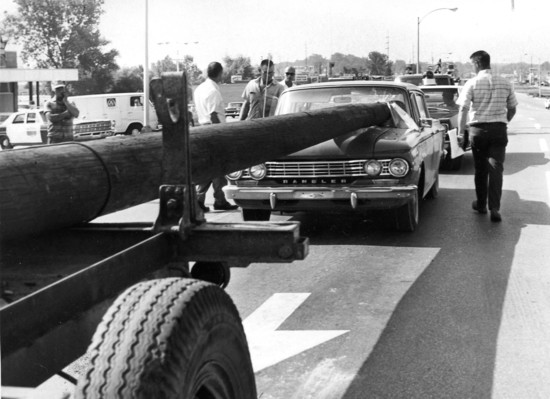 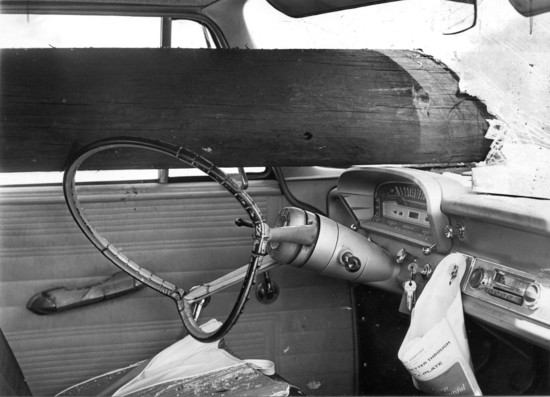 Mrs. Bill J. Wooldridge, 739 Charles, survived an auto accident at Broadway and North Kingshighway Monday morning in which a fraction of an inch or a second, ordinarily inconsequential, meant the difference between life or death.

Very crucial things happened just at the right time and also in just the right way in the mishap at about 9:30.

As a result, Mrs. Wooldridge walked away from the crash with only cuts and bruises after her car had hit a utility pole on a trailer. The pole crashed through the windshield of the Wooldridge car directly on the driver's side, where Mrs. Wooldridge was seated. No one is exactly sure how the pole kept from directly hitting her.

She was admitted to St. Francis Hospital where she was listed in good condition this morning.

Mr. Wooldridge, a laboratory technician at St. Francis, said his wife was still too upset this morning to talk about the accident. He related her account of the crash.

He said his wife had stopped at the Cape State Bank and then pulled onto North Kingshighway northbound. Her two children were in the front seat with her.

He said she saw a red light at the Broadway intersection and prepared to stop behind a utility truck pulling the pole. "She said she misjudged the length of the pole."

It came through the windshield directly in front of the driver's seat, breaking the steering wheel. Mrs. Wooldridge was in its path but just at the right second she apparently leaned to the right, out of the pole's path.

"She said she was not conscious of doing anything to keep from being hit," Mrs. Woodridge said. But he said his wife had developed the habit of leaning in front of the youngest child, Todd, who is almost 2, when there is any danger of him falling from the seat where he usually stands. "This is probably what happened. Todd was standing next to her."

Mr. Wooldridge said the pole apparently passed over his wife's left shoulder, leaving what is believed to be a slight skin burn. She was mostly injured from the flying glass from the windshield suffering no serious injuries, Mr. Wooldridge said.

The pole penetrated the Wooldridge four-door sedan four feet, Mr. Wooldridge said. The pole stopped in the back seat area where the oldest son, Jon, who is 6, usually sits.

He had asked to sit in the front seat next to the right door that morning, and his mother had granted the request.

Todd and Jon suffered minor cuts from the glass.

Police identified the driver of the Southwestern Bell Telephone truck as Elan Jacob Russell, 1815 Lawanda. There were no charges against either driver.

Mr. Woodridge said his wife won out against tremendous odds. "We've seen how close it was and how bad it could have been."