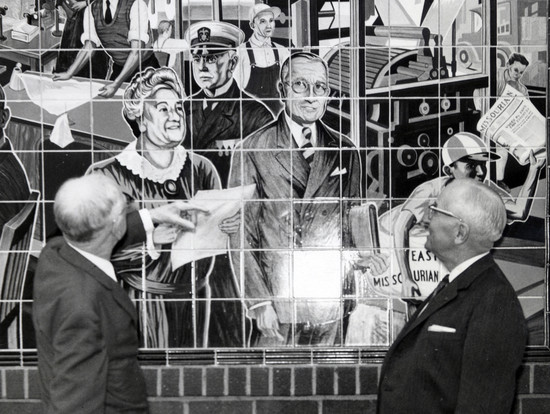 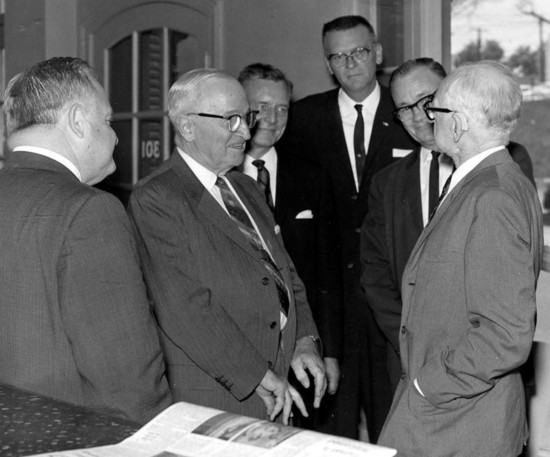 Former President Harry S. Truman speaks with Fred Naeter in the front office of The Missourian Building on Oct. 16, 1962. To the left of Truman is Mayor Walter H. Ford. (Johnston Studio photo) 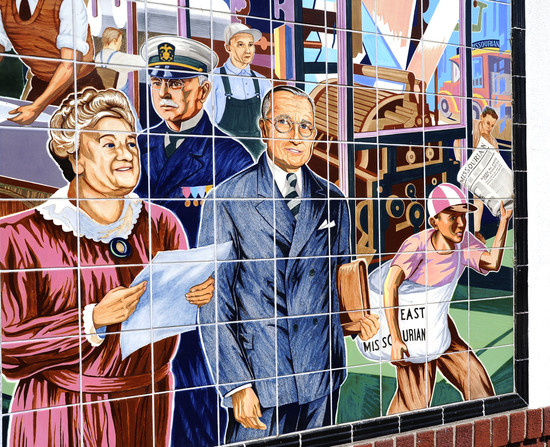 The portrait of Harry S. Truman is featured on one of the two faience tiles, Gathering and Disseminating News. Other notables include opera singer Mme. Ernestine Schumann-Heink, here in 1920, and John Philip Sousa, here in 1929.

Judge Harry S. Truman of Jackson County encouraged greater interest in highway and general beautification. He was here in 1934 and on other occasions.

The city's distinguished visitor Tuesday, former President Harry S. Truman, paid a visit to The Missourian to talk over old times with a friend of many years, Fred Naeter, the newspaper's publisher.

The two visited for some time in Mr. Naeter's office, after which the former president was escorted out to the Lorimier Street side of the building to view two tile murals, one of which pictures his likeness among a group of nationally prominent Americans who have visited The Missourian in past years.

Shortly after Mr. Truman arrived in the city Tuesday morning, he expressed a desire to visit Mr. Naeter, and a meeting was arranged to fit into the former president's busy schedule immediately following his press conference early in the afternoon.

Their visit renewed a friendship which began more than 30 years ago when Mr. Truman was a county judge of Jackson County and both were active in Missouri road development and roadside beautification. Their many meetings since that time have included two at the White House and a chance to visit together in Mexico City while Mr. Truman was president.

Looking at the murals, which were installed on The Missourian Building in 1945, Mr. Truman remarked there was no mistaking his likeness, and rapidly identified the likenesses of Evangeline Booth, Ernestine Schumann-Heink, and John Philip Sousa.

During his visit to Cape Girardeau, Truman spoke to 850 people at a rally of the Bootheel Democratic Club at the Arena Building. Earlier he spoke at a press conference at Memorial Hall on the State College campus.