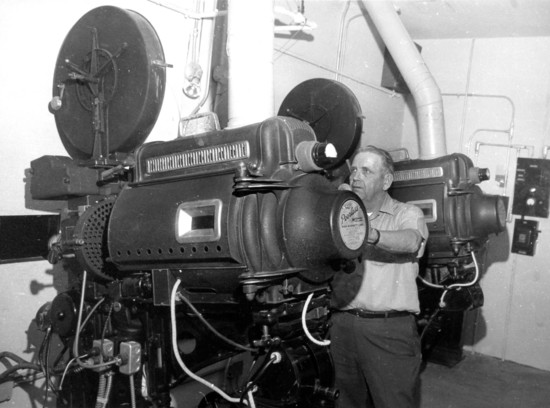 A technician works over the new projection equipment at the refurbished Broadway Theater which reopens Wednesday night after a lapse of several years. The opening attraction, "Funny Girl," is expected to attract a capacity crowd. 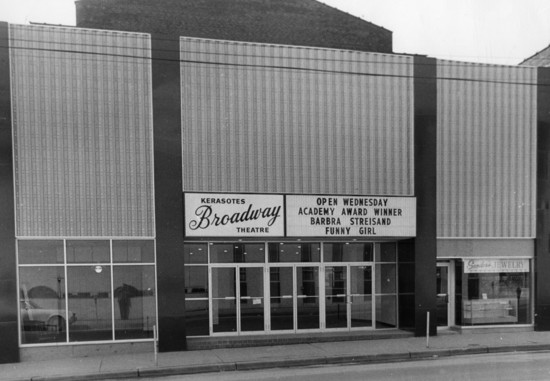 A refurbished Broadway Theater, which stood dark and idle for nearly 10 years, will come alive once more Wednesday night.

The theater will reopen by showing the film, "Funny Girl," starring Barbra Streisand.

The final stages of the extensive remodeling were still in progress this week. The lobby, stairs and aisles have been dressed in rich red carpeting, the lobby has been generally remodeled; the stage and auditorium have been completely redone, including the installation of all new seats. Restrooms, concession and ticket areas have been renovated and the lighting system has been revamped.

The old marquee, which had hung out over Broadway since the 1930s, was removed last May and in its place is a new flush plastic sign board which bills the movies and their stars.

The closing at that time came when the Shirley Theaters Corp., then owner of the Rialto, bought the Broadway from the Fox Theater group.

The Broadway and Rialto then were sold last summer by Shirley Theaters to Kerasotes Theaters of Springfield, Ill., which immediately announced the facility would be remodeled and reopened.

Mr. Meyer has been in the theater business in Cape Girardeau since 1932.

As previously announced, Truman Putz, manager of the Rialto Theater, is to be general manager of the Kerasotes property in Cape Girardeau, which includes the Broadway.

Seating capacity at the Broadway will be just less than 700, Mr. Meyer stated. The early capacity was 1,097, but this included 374 balcony seats which have been removed. The balcony was not included in the renovation and will be unused, at least for the present.

The new seats are spaced somewhat wider, which also reduces the capacity.

The Broadway had its inaugural on Dec. 24, 1921 when it opened by playing "The Sheik" starring Rudolph Valentino.

The first talking picture to be shown there was "Alias Jimmy Valentine" on May 26, 1929, five months after the first sound movie had been shown in Cape Girardeau, at the Orpheum Theater.

"Funny Girl," which starts at 7:15 Wednesday night, will play for an undetermined period. It will be followed by "Oliver."

In this previous blog, "The Day the Earth Stood Still" was playing at the Broadway Theater when the Golden Troopers returned home from Miami in 1951.

"Cape's own movie" was shown at the Broadway Theater in 1940. See Sharon Sanders' blog, From the Morgue.