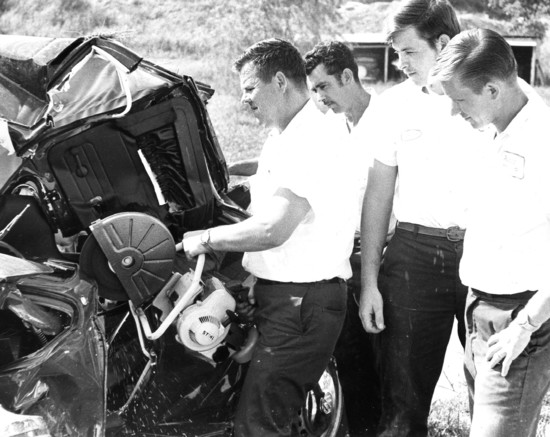 Gene Huckstep uses an orbital gasoline saw to cut into the door frame of a wrecked car in this demonstration. Looking on are, from left, Manuel Oliver, Gordon Huckstep and Terry Bock. With Leonard Sachse, not present, they have provided a special service to the area by using special equipment to remove victims from automobiles wrecked in serious accidents. 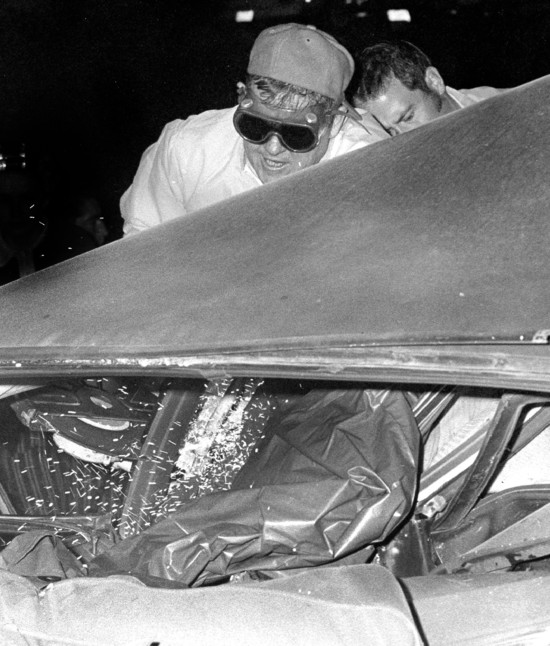 Gene Huckstep, owner of Huckstep Body and Paint Shop, works at extricating victims from wreckage, assisted by one of his employes, Gilbert Wooldridge.

Agony of mangled bodies turns to satisfaction when lives are saved

"It's real agony when you try to imagine what you're going to see. But you can't know what to expect until you get there. They only call us for the very worst ones."

The words were voiced by Gene Huckstep who along with Leonard Sachse, Terry Bock, Manny Oliver and Gordon Huckstep, removes mangled bodies from mangled wrecks of automobiles.

Their desire is to remove the bodies before death. But this has happened only about 10 times during 3 1/2 years and in over 100 wrecks. As the man said, they only call him for the very worst ones.

The unpleasant but necessary service provided by the five employees of the Huckstep Body and Paint Shop is almost unique to this area. Only municipally-financed rescue squads in St. Louis and Kansas City have the equipment necessary to cut through or pry apart a twisted steel automobile body.

"I stumbled onto this almost by accident," Mr. Huckstep said. "About 3 1/2 years ago we purchased a new type of saw with an orbital blade. A highway patrolman was there when we got it and commented that it would be good for getting people out of bad wrecks.

"It wasn't long after that that the same trooper covered a bad wreck near Old Appleton. A man was trapped inside a truck and the trooper remembered our saw. He called us and that's when it began."

The saw has been joined by other pieces of equipment and with over three years of experience, the men can usually free a wreck victim in a matter of seconds. "On each wreck you find a piece of equipment that will work a little better than the old one," Mr. Huckstep said. Instead of the saw, they now usually use a hydraulic fork spreader, a machine that can stretch a three-eighths inch opening into one big enough to extract a person from a wrecked automobile.

A Service to the People

The service is one that brings no additional income into Mr. Huckstep's business. "Cars that are in these wrecks can't be fixed, and most of the time we don't even get the job of towing the wreck," Mr. Huckstep said.

"This is just a service to the people. Something we do because it needs to be done."

It was after the third time that he had been called to free an injured person from a wrecked auto that Mr. Huckstep decided to continue to offer this service.

"A couple of boys had hit a patch of ice down near Scott City. The car skidded upside down and most of the way off a bluff. One boy was thrown free and the other was trapped in the car that was being held up by a big tree that was growing from the bottom of the bluff. We had to hang from the bluff by ropes while we were working, but we freed him.

"His mother was there while this was all going on, and I can never forget the look on her face when we helped him out. It was like her son had been given back to her."

Mr. Huckstep said the automobile accidents that require his assistance usually occur between midnight and 5 a.m., the driver is almost always driving at a high rate of speed, and frequently alcohol is a factor.

He said the new straight, multilane highways produce more fatalities than the old hill-and-curve type. "People fear and respect roads like Highway 61," he said. "But too many get on the interstates, go too fast and then the slightest mistake means a fatality."

He said most of the accidents he has covered have occurred on level roads south of the Cape Girardeau Municipal Airport.

The men arrange their schedules so at least one is available for call at all times. They have installed a telephone system that rings at the homes of all five with one call.

"We have some real good men," Mr. Huckstep said. "You have to give them credit. It takes a special type of individual to do something like this.

"This is something they do on their own. They don't make any more money because of it."

Start With a Call

A typical call will begin with a telephone call from the highway patrol or sheriff's department, when the patrolman covering an accident finds the victim or victims cannot be removed from the wreck without assistance.

Almost always at least two of the Huckstep employees will answer. One will drive a wrecker, the other will drive a truck containing the special equipment.

With the equipment and experience, it usually takes only a matter of seconds to free the victim.

He also has high praise for the highway patrolmen who he says are "really dedicated to a tough job."

A man who has worked with automobiles and wrecks for years, Mr. Huckstep sees new safety features on cars as being a definite asset.

"The new collapsible steering wheel is especially good," he said. On older models, the wheel will drive a man into the roof in a bad wreck. But you gain from 13 to 17 inches of shock with the new collapsible columns."

About seatbelts, he said: "We've seen some dead people who would have been walking around with only a few bruises if they hadn't been sitting on their seatbelts when they had a wreck. Once in a great while a seatbelt may cause a death, but the odds are against it. I'll always wear one."

He sees the fuel tanks used in automobiles as being the most hazardous feature and having the most room for improvement. "They should make a self-sealing gas tank. You're always hearing of a fatality when there is an accident. The gasoline tank springs a leak and then there's a fire or explosion."

The team answers calls within about a 40-mile radius.

"The ones we answer are usually so bad there isn't enough time to go very far," Mr. Huckstep said.

But their longest trip was also one of their longest jobs. "We were called up around Fredericktown where a log truck went into a ravine." Mr. Huckstep said. "The cab of the truck was in the bottom of the ditch and the trailer was on top. The driver was in the cab that was bearing the weight of all the logs. They couldn't move the logs at all, because every time they tried, the driver would scream.

"We cut for over five hours and got him out with nothing more than some broken ribs and a cut-up pair of cowboy boots he was pretty mad about. He said they cost him $100."

The man with the cowboy boots and the boy on the bluff, and eight or nine others have survived wrecks because Gene Huckstep, Leonard Sachse, Terry Bock, Manny Oliver or Gordon Huckstep was there to remove them from the steel twisted around their bodies.

These 10 or 12 have made it worthwhile," Mr. Huckstep said. "I'll spend any amount of money on equipment or give any amount of my time if we can have that one that lives because of what we do. It's worth it."

Huckstep served as presiding commissioner of Cape Girardeau County for 16 years, from 1979 to 1994.