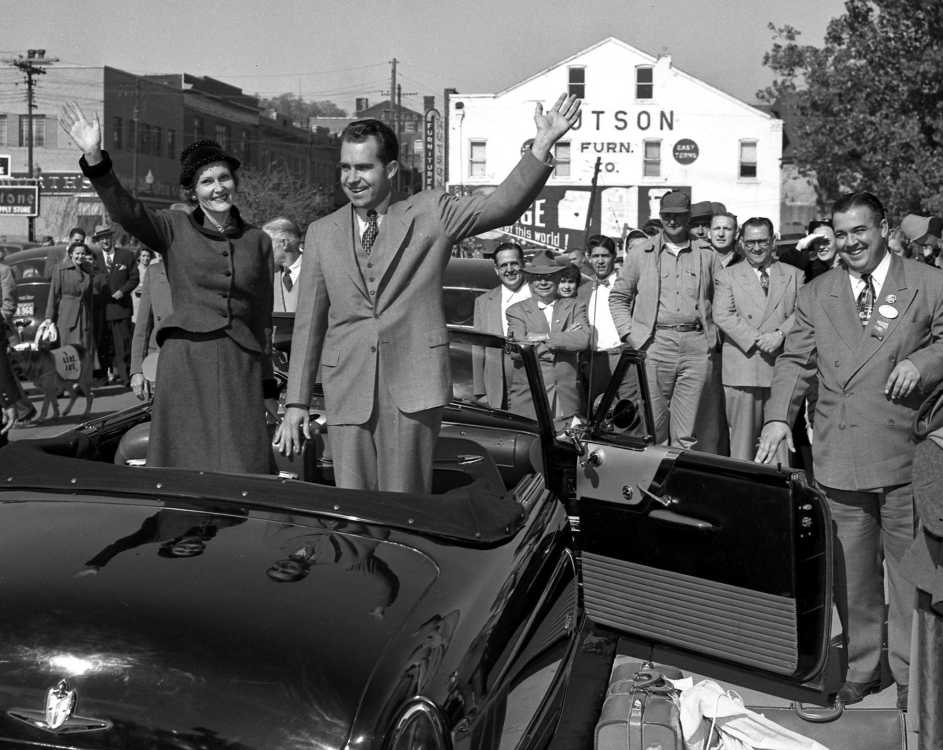 A friendly wave and a flashing smile were given by Sen. Richard Nixon and his wife, Pat, on their arrival at the Frisco passenger station today for his major address here this afternoon. This picture was taken after they had passed through the main crowd on the river side of the station and had stepped into their automobile for the trip to Houck Field House. Rush H. Limbaugh Jr., county Republican chairman, who accompanied the Nixon party here from Festus, stands at the automobile door. (G.D. Fronabarger photo)

Greeted by a friendly, cheering crowd upon his arrival and getting an ear-splitting reception at Houck Field House as he launched into an attack on the Truman administration, Sen. Richard Nixon, the Republican vice presidential nominee, brought the national political campaign to southeast Missouri this afternoon.

On a whirlwind, one-day trip through southern Missouri, the senator came by special train after making three whistle-stop talks en route from St. Louis and departed shortly after 2 o'clock from Municipal Airport for Springfield.

Accompanied by his attractive wife, Pat, the California senator was cheered along the streets en route to the field house. And, they waved to everybody, visibly pleased. There was no time for a formal parade--time wouldn't permit it--but hundreds gathered along Main street and Broadway to see the man who has traversed the whole country from one end to the other in helping to carry the fight against Communism and corruption in government.

Police Chief Ivan Richmond estimated the crowd in the field house at between 4000 and 4500.

Nixon opened up his address at the field house by saying the large turnout here this afternoon shows that this campaign is rolling in high gear. And it shows that Missouri, the state that sent Harry Truman to Washington, will cure it by taking him away.

"What kind of man is he? When you sit and talk to the man you know what kind of a man he is. He is a man who is deeply dedicated. He is a man who came up the hard way in a small Kansas town in a large family. He worked his way until he won an appointment to West Point.

"He is a man who has always had one test for anything, and let me cite an example. Right after the convention I sat down to talk to him, and he said to me: 'Dick, if I become President there is only one test which I will apply to every bill that comes before me: Is it good for America?'"