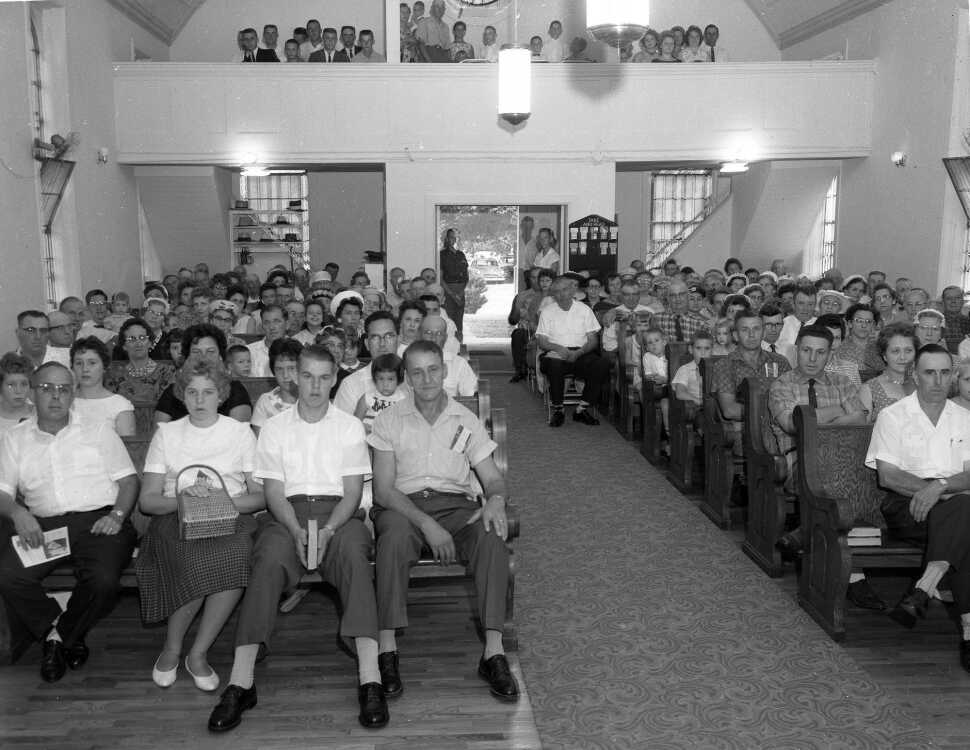 Assembled in their 75-year-old church sanctuary are members of the Hanover Lutheran congregation. The anniversary of the building's dedication will be celebrated with two special services Sunday. (G.D. Fronabarger photo)

Two special services Sunday will celebrate the 75th anniversary of the dedication of the present Hanover Lutheran brick church edifice, located a mile north of the city limits on Perryville Road.

Following the pattern for regular Sunday services, Sunday School and Bible classes will begin at 9 a.m. The first anniversary service has been set for 9:45 a.m. with the Rev. David Loesch, pastor, as speaker.

Guest speaker for the second service of celebration at 7:30 Sunday evening will be the Rev. Elmer Koerber of Springfield.

Both services will feature anthems by the recently organized church choir, with Mrs. Louis Weiss at the organ. Offerings from the services have been designated for the congregation's building fund.

Obtainable at both services will be a special anniversary booklet. Excerpts from the brochure tell of the congregation's history:

"While there were Lutherans among the early settlers of the southeast Missouri area as early as 1817, according to available records, it was not until 1846, a few years after a number of persons professing this faith had settled in an area a short distance northwest of the city of Cape Girardeau, that a congregation was organized under the name of the Hanover Lutheran Church. This was done under the leadership of the Rev. F.A. Lehman, the congregation's first pastor.

"The congregation's first church-home was a frame building erected on the Bertling property about a mile south of the present sanctuary, and was known as the Bertling Church. Here the congregation came together in 1887, under the Rev. O.R. Hueschen, the present new brick structure was completed and ready to be dedicated.

"It was built on a plot of ground given to the congregation by Mr. and Mrs. Henry Krueger, charter members who lived on the farm now being occupied by Mrs. and Mrs. Oscar Huettig and Ottomar Huettig. Numerous necessary and desirable changes, improvements and repairs were made in the building through the years; the greatest, perhaps, being the extention built on the east end and the complete renovation of the interior in preparation for the 50th anniversary of its dedication. New stained-glass windows also replaced the former ones at about that time.

"A succession of 19 resident pastors served the congregation during its 116-year history."

The new church building was dedicated in 1969 and expanded in 1987. More church history is available in this story published Oct. 14, 2006: