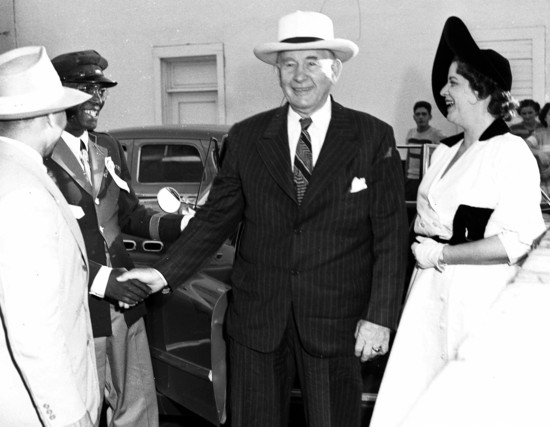 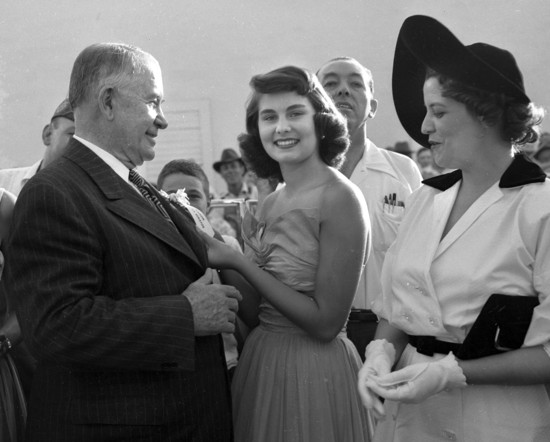 Miss Carolyn Corlew, center, of Sikeston, Mo. pins an "Allison for Senator" daisy on Vice President Alben W. Barkley outside the Dunn Hotel, where the vice presidential party stopped while in Sikeston for the "Veep" to deliver an address Saturday night. At the right is Mrs. Barkley. (G.D. Fronabarger photos)

Vice President Alben W. Barkley delivered a ringing defense of Democratic Party policies from the time of President Cleveland to today in the principal address of Barkley Day ceremonies here Saturday. The vice president spoke in Armory Park and he and Mrs. Barkley opened the festivities at a dance in the Armory following the "Veep's" address.

Mrs. Barkley, who came here from Paducah, Ky., with her husband, was a star attraction equal to Mr. Barkley himself. The former St. Louisan, who married the "Veep" after a courtship that drew the attention of the nation, waved and greeted the audience that lined the streets of Charleston and Sikeston as much to see her, most people said, as her famous husband.

But, although the rally was widely heralded as a high point in the current Democratic primary race, the audience at Mr. Barkley's speech was, to Democratic leaders, disappointingly small. From 300 to 500 people gathered to hear the "Veep."

Although the vice president made it clear to this reporter that he did not come to Sikeston to support any candidate, saying "I cannot interfere in the Democratic politics of a state not my home state," it was equally clear that the Barkley Day celebration was a boost for one of the candidates for the Democratic nomination for United States senator--Emery W. Allison of Rolla.

There was Allison literature all over the hotel. The lobby was festooned with Allison signs. Almost everybody wore Allison-for-Senator ribbons, including the group of notables who greeted the vice president outside Sikeston.

One of the other candidates for the senatorial nomination was in Sikeston, however, and everyone knew it. She managed to get her campaign signs up too, and placards advocating the candidacy of Marjorie Bell Hinrichs glared at those putting forth the virtues of Sen. Allison.

But, Mrs. Hinrichs was upset by the whole affair. Said she: "This is undoubtedly an attempt to hoodwink the people of southeast Missouri...chicanery has been practiced by someone in the Democratic Party." Later she told a friend: "I'll be the next senator from the State of Missouri."

Mrs. Hinrichs said that she had received invitations to attend the rally from Democratic headquarters, but when she arrived in Sikeston she found that the rally was being held "exclusively for the benefit of one man--Emery Allison." She said she had been led to believe the celebration was a district Democratic rally, not "exclusively an Allison function."