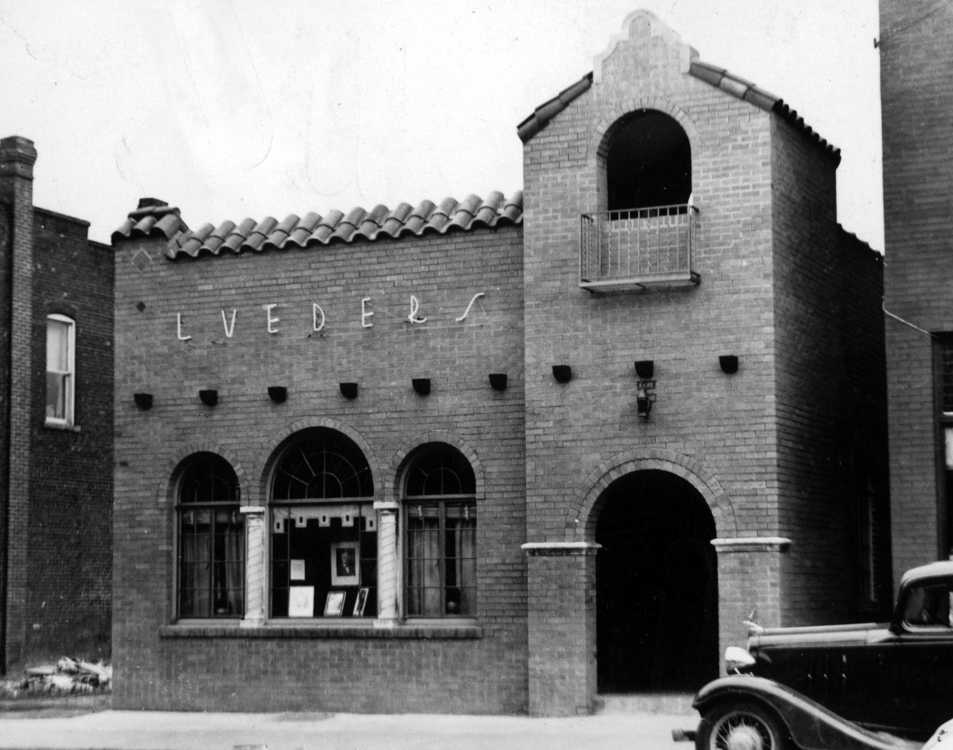 Lueders Studio, 427 Broadway, in Cape Girardeau. Herbert L. Lueders established the business in 1925 and was active in it until 1957, when he retired and sold the business to his son, Paul Lueders.

The continuous effect of business and professional men in Cape Girardeau to improve the facilities with which they serve the public is well exemplified in the new Lueders Studio, formally opened today. The building at 427 Broadway also adds to the city another unit of the city's prevailing architectural type, the Spanish trend.

Taking the place of an old frame building, the new one, built of attractive buff brick with the tower, arched entrance, wide windows and tile roof conventional to Spanish influence, adds a distinctive note to Broadway.

There are six rooms on the ground floor and the basement is divided into others to further provide the complete facilities H.L. Lueders, the owner, has incorporated to make his professional setup complete.

From the entrance the visitor goes into a reception room which has the effective taste of being well planned and designed. Here walls are tinted in neutral cream and the woodwork, as in other parts of the structure, is dark oak. An exterior window display opens to the street frontage. An office alcove is west of the reception room, and dressing rooms for both men and women also open west from the corridor running south from the reception room.

The finishing room is immediately south of the reception room, and this is equipped with a north skylight, a thing most desired by photographers. Double slide filing cases in this room permit portrait displays to be taken from them in the reception room. The printing and enlarging room is immediately south of the finishing room.

Stretching the width of the building and occupying a space 20 by 27 feet is the camera room, so arranged that photographs of the subject can be taken from any angle without a change of position of the subject. A new camera, new lights and new backgrounds have been added. In the basement, besides the furnace room, are two developing rooms. At points of vantage portraits are hung on the ground floor so as to catch the eye of visitors from any angle.

Mr. Lueders came to Cape Girardeau in 1925 from Lexington, Mo., and purchased the frame building, which formerly was the Herman Rabich dwelling, and occupied it until it was recently razed to make room for the new. At the rear of the new structure, which is 27 feet wide and 53 feet long, plans are being made for a formal Grecian garden for outside photography.

Associated with Mr. Lueders is a son, Herbert Neil, who graduated from Central High School last year and is now learning the business. Another son, Paul, is now attending the art school at Washington University, St. Louis, in preparation to also become associated in the business. Mr. Lueders specializes in portrait photography and has won awards at six national and one international photographic expositions. His new studio looms brilliantly at night with varied colored lighting effects in the Spanish tower and a blue neon sign. A.F. Lindsay, Cape Girardeau architect, designed the building.