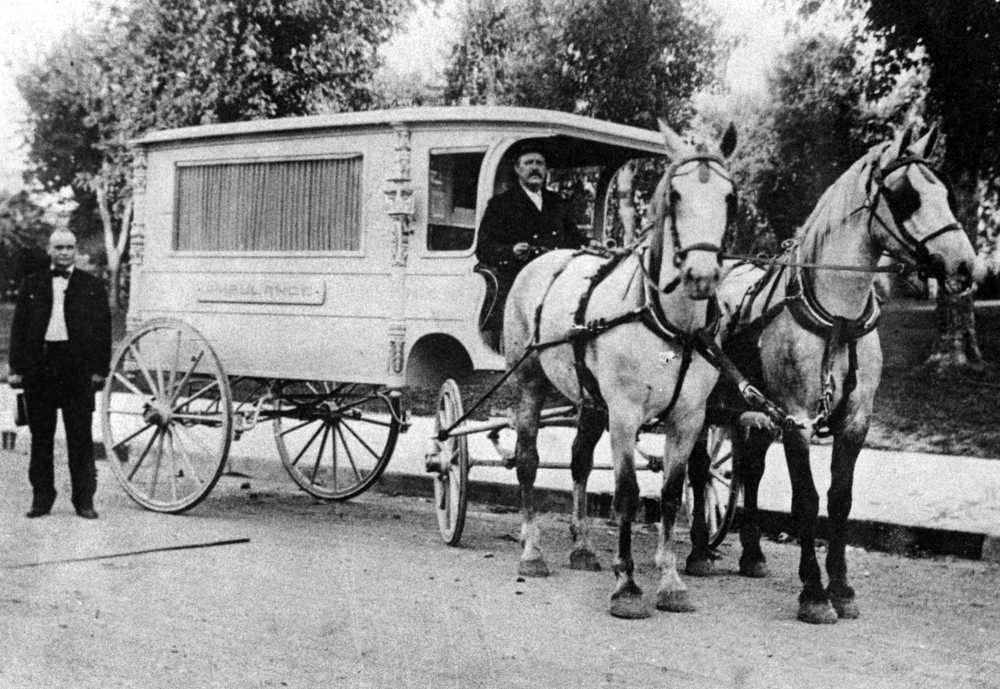 Martin G. Lorberg brought the first ambulance to Cape Girardeau. It was a horse-drawn affair and made its debut here in September 1911.

The ambulance made many trips to the Frisco passenger station to transport ailing or injured people, brought here from throughout the area to St. Francis Hospital.

E.P. Thomas, an embalmer, stood at the rear of the vehicle, and Jim Miller was the driver. The photo was made on Lorimier Street at the Courthouse Park.

Southeast Missouri Undertaking Co. unveiled its new ambulance on Sept. 20, 1911. The company also got a new hearse that day.

A newspaper account said the ambulance was "one of the latest designs and is equal to those used in the largest cities."

Beautifully upholstered throughout, it also featured a state of the art internal communications system -- a speaking tube running from the driver to provide "instant communication," according to the newspaper.

It was also equipped with alarm signal gongs.

The vehicle was drawn by "a fine pair of iron grey horses" that were trained in the same manner as horses used by the fire department to pull its equipment.

The driver, who wore a Red Cross uniform, horses and equipment were ready to go at any time -- day or night -- to transport the sick and injured.

The most regular calls were to the railroad depot to pick up injured or ailing passengers transported from southern Missouri.

The horse-drawn service was immediately phased out when Lorberg bought the city's first motorized ambulance on Feb. 6, 1917.

He ordered the city's first motorized hearse on July 29, 1916. That vehicle was purchased for $4,000 from McCabe Powers Carriage Co. of St. Louis. It took over two months for the company to build and deliver the hearse.