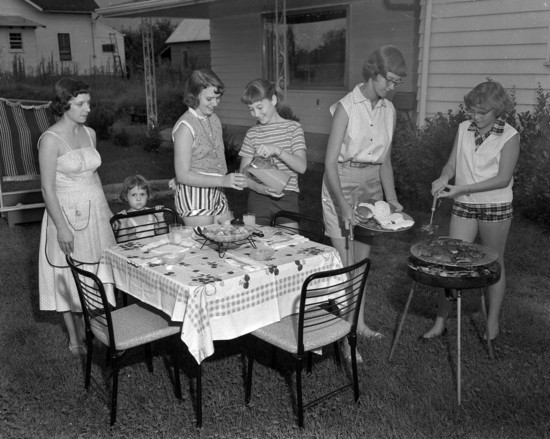 Barbie Macke Stroder sent in information on the girl grillers: "This is a picture of my mother Bonnie Macke and the Gordonville 4-H foods group. Pictured from left to right are Bonnie Macke (leader), Pamela Macke, Judy (Volkerding) Wendel, Katy (Doering) Kester, Janet (Lorberg) Fiedler, and Alberta (Macke) Dougan. The picture was taken in 1958. We enjoyed seeing the picture." 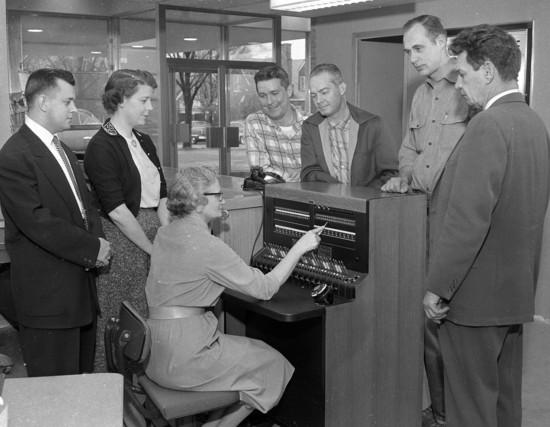 Lee S. Olson of Cape Girardeau identified himself in the photo of the woman at the switchboard: "I believe that this was taken at Southeast Hospital. First man on left is Allen Baker. The tall man on the right is Lee S. Olson and the man beside him is (Herbert) Wright, who was administrator of the hospital at that time."

Sally Owen of Cape Girardeau confirmed the identity of her father, Herbert Wright, in this photo: "That is my dad on the right. However, I don't think it was taken at the hospital. From the look of the photo this would have been in the early to mid 50s, and at that time the spot in the hospital where a switchboard would have been had no window. (You entered the front doors and then went up a flight of steps to the office/admitting.) Didn't someone think it was a demo at the phone company? I'll be anxious to find out what/where it was!" 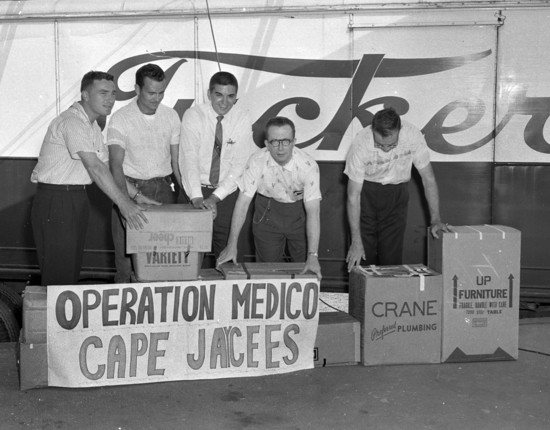 The man second from the right is Jean Cavaner. He was associated with his mother at Big Star Market from 1961 to 1972. He then started Shoppers Warehouse Market, the first discount grocery store in Cape Girardeau. 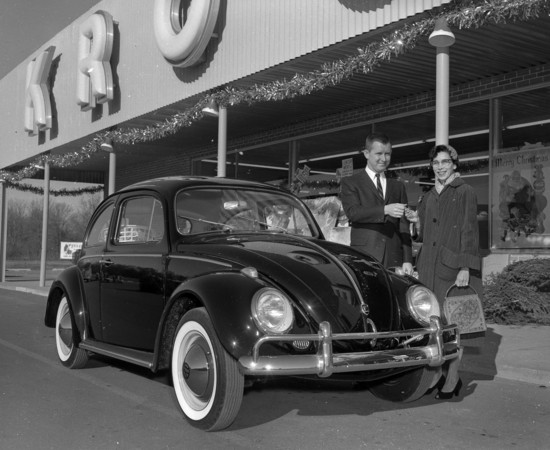 This mystery photo was published in the Dec. 21, 1960 Southeast Missourian. It shows Mrs. Kenneth Burnham in front of Kroger in the Town Plaza receiving a new 1961 Volkswagen. She won a contest by figuring the actual weight of the car and groceries. Kroger opened a new store in the Town Plaza Shopping Center in Cape Girardeau on Aug. 11, 1960. 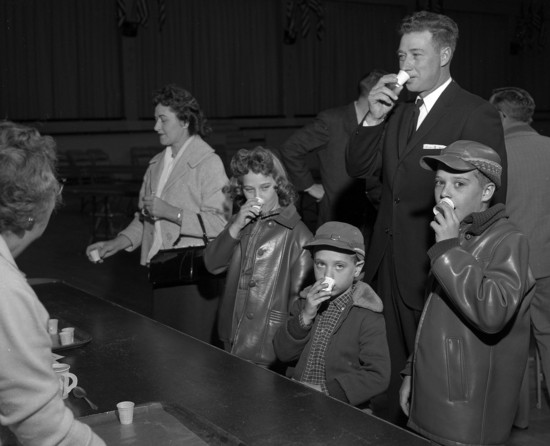 Mark Kluesner identified the family at what is believed to be a polio clinic: "The family in this photo is the Leon and Marcella Schlitt family from Oran, Mo. Leon and Marcella are both deceased. The children, left to right, are Jolene, Donnie and Kenny. Jolene is married to Sam Felter; they live in Benton, Mo. Donnie and Kenny both live in Oran." 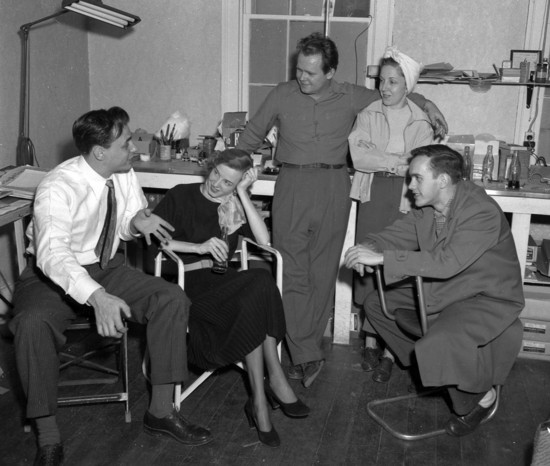 George E. Davis wrote: "The man on the left looks like Fred Goodwin, who was a SEMO prof. I am not sure. The man on the extreme right is Clarence Trovillion. I have no idea of the circumstances. I remember them from Central High School in the late 40's. I am sure someone will correct me, and I have no idea about the rest of the people in the picture." 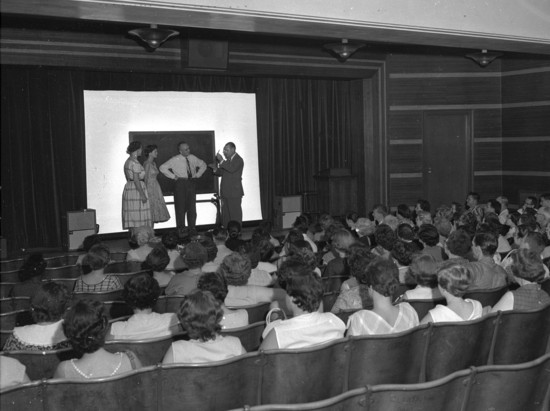 Nora Reynolds Zimmer was able to provide the location: "I can tell you the place in photo 3 is the Little Theater in Kent Library at SEMO. I went to College High and we had a lot of assemblies and programs there." 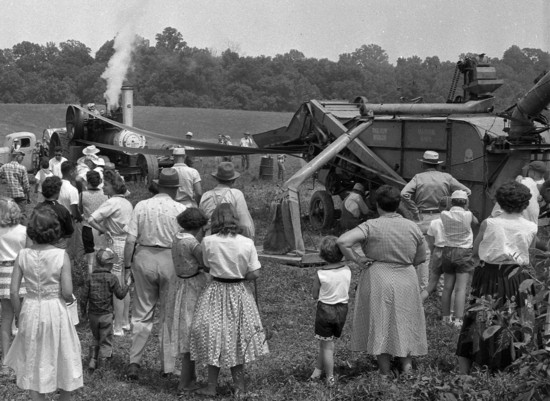 Mark Kluesner referenced an Out of the Past item that may have solved the mystery of the steam-powered thresher photo: "Following is a copy of the July 13, 2011 Out of the Past item that may possibly be related to the threshing operation shown in today's paper. I'm 55 years old and can remember as a child attending a threshing/steam demonstration with my parents. I would have been 6 years old at the time of the 1961 steam engine threshing took place on the Ed Foeste farm." 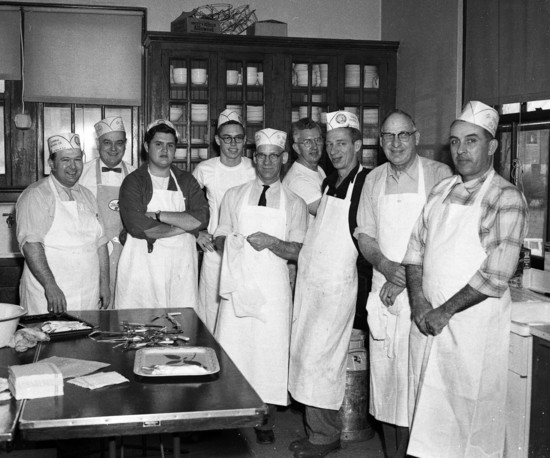 Shirley and Ken Ruff provided IDs for the men serving up flatcakes at a Jackson Lions Club Pancake Day: "The photo in Sunday's paper of a pancake dinner is in fact a picture taken at the Jackson Rotary Pancake Day. We can identify the following in the photo, left to right: Melvine Lichtenegger, Charles Sander, Dr. Ruff, unknown, Paul Brunning, Bill La Monte, Carlton Meyer, unknown, Carson Wagner. We think this was taken in the late '40's."

Mary Ann Haynes had more information: "Jackson Lions Club... On left: Melvin Lichtenegger... To the left of Carlton Meyer is Paul Bruening (Bruening Dry Good Store). Behind and between Mr. Meyer and Mr Bruening is William Lamont (RII school superintendent). Think the person all the way on the right of photo is Elmo Martin (Martin Jewelry Store). Cannot identify the other Jacksonians. Not sure about the spelling of the last names..." 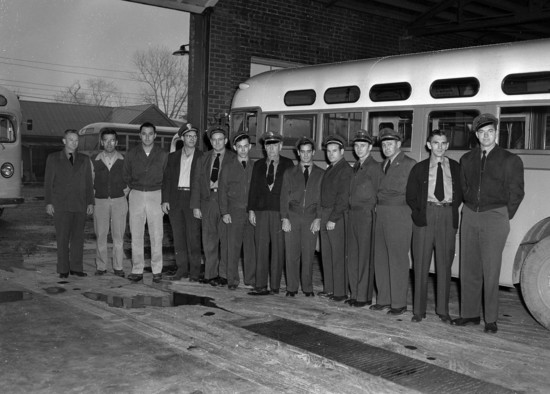 Ray Nichols of Arnold, Mo., recognized a face in the crowd of Cape Girardeau bus drivers: "Second from right, without a hat, is Harley Langston. He had the Main Street and Red Star bus run in the 1950s."

Jerry Wolsey of Chaffee, Mo., also saw someone he knew: "The photograph is the city buses in Cape at the time. I believe the driver third from right is Otto Garner. He later drove for the St Louis Cape Bus Line. My dad Joe Wolsey drove the city bus at the beginning of World War II. As a matter of fact, he was coming up Broadway hill driving the city bus when Pearl Harbor was attacked. Hope I helped some, by the way my grandpa Joseph Wolsey owned and operated the City Drug Store at the corner of North Main and Independence for 23 years in downtown Cape." 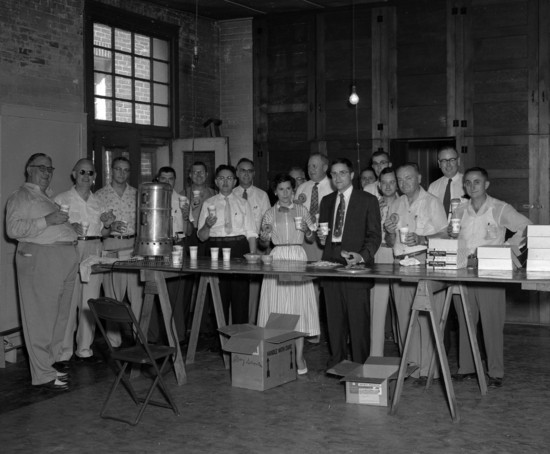 Paul Shawan recognized a longtime Cape Girardeau businessman: "In photo #8, is that Marty Hecht in the dark suit?" 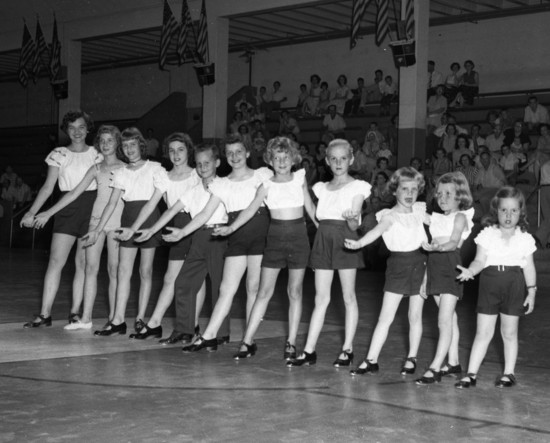 Kay Maevers recognized herself as the third child on the right. She said this was a dance recital for the Evelyn Bissett Dance Studio in May 1956. 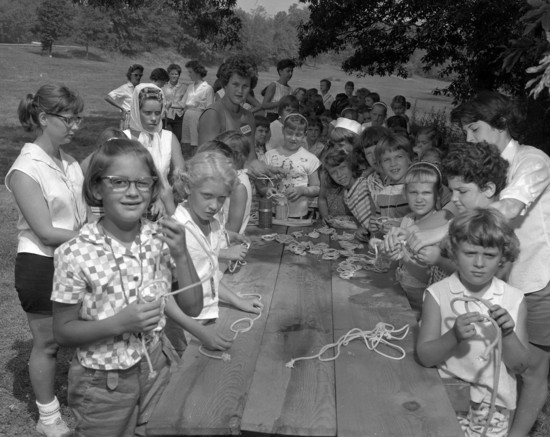 Billy H. Held provided a partial ID of this photo of knot-tying girls: "The teenager near the front, right (face partially hidden), who is assisting the girl to tie the rope is, I believe, Laura Welker (whom I later married; she died in 1973). Her sister Alice Riehn nee Welker at first thought it was her own picture, but finally agreed that it was Laura. The tall girl in the middle, looking at the camera is a friend of Laura's, Becky Davis." 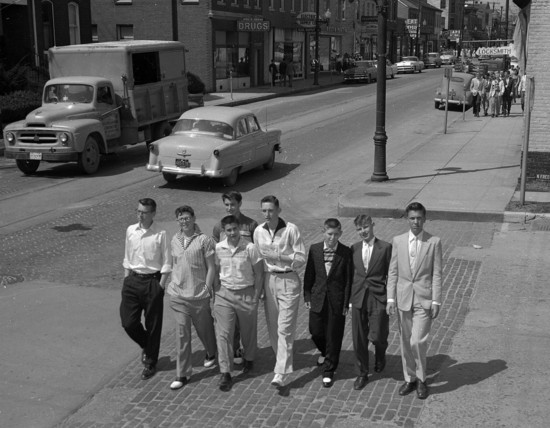 Robert Shy thought he recognized the groups of boys walking down Broadway as being from St. Vincent's College. 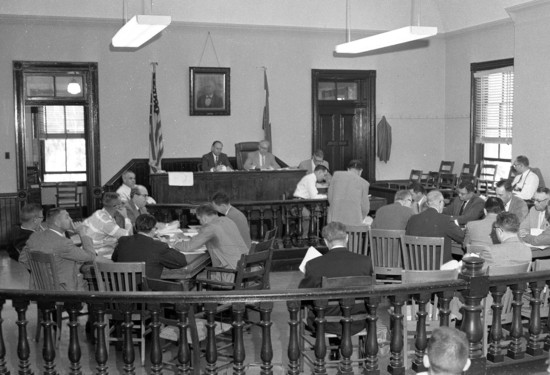 This is the courtroom in Common Pleas Courthouse in Cape Girardeau during the Frisco Railroad hearing to drop its night passenger train service in June 1958. Two Public Service commissioners are seated, W.W. Barton, left, and E.L. Mcclintock. 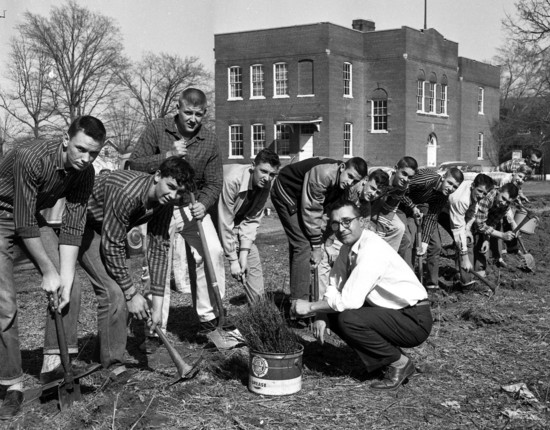 Jim Gloth believes this teacher may have been Tom Lett: "We don't know what school this is, but the teacher looks like Tom Lett. Would also like to know where the school was..." 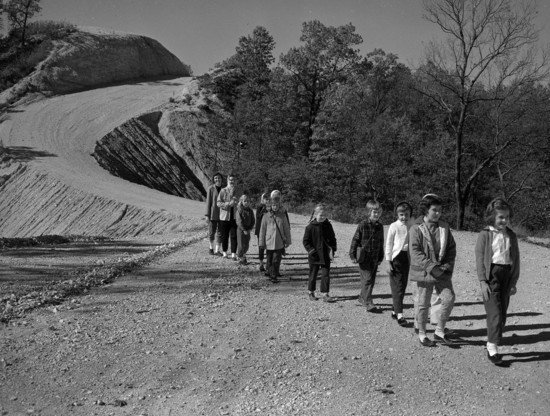 Karen M. Maevers Cotner identified several young hikers: "This photo is of Brownie troop from Trinity Lutheran School and it is at Trail of Tears State Park. The leaders are Mrs. Mary Maevers and Mrs. Marian Lunsford. I am in the line, the girl right in front of Mrs. Lunsford. It was probably 1960ish. I don't remember the other girls' names." 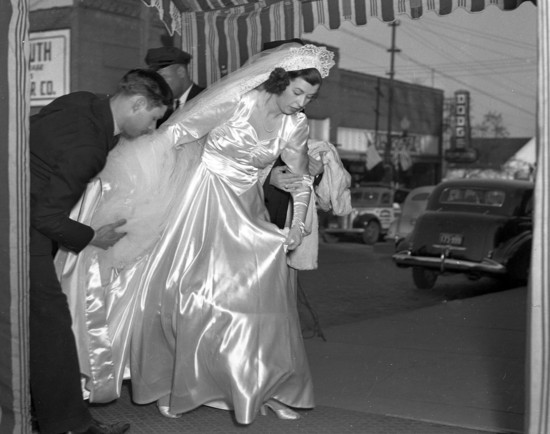 No one identified the bride, but Ron Grebing of Apex, N.C., thought he recognized the location: "I don't know the bride, but it looks as though it is at First Presbyterian Church. The Dodge sign is at the old Harris car dealership at the top of Broadway hill." 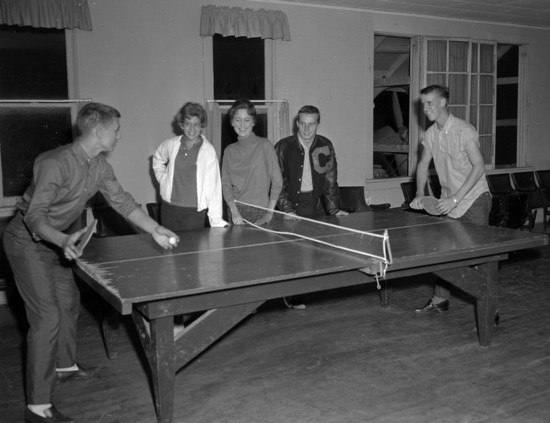 Jesse James knew one of the ping-pong players: "The person in the Central jacket is Charles James, Central class of '62. He knew the person next to him, but I have forgotten her name." He did not remember where the picture was taken.

Astowick writes: The girl in the white jacket is Mary McBride, class of '63. Photo was taken at the old teen club on Themis.

Teen Town offers varied forms of recreation for youngsters to release some of their surplus energy. Here, Central High School pupils engage in a ping pong match, some as participants and others as spectators waiting their turn at the table. From the left, Dave Allen, Mary McBride, Patty Cox, Charles James and Hughie Wolters. (G.D. Fronabarger photo)

Teen Town was located on the second floor of the Juden building at 115a Themis. 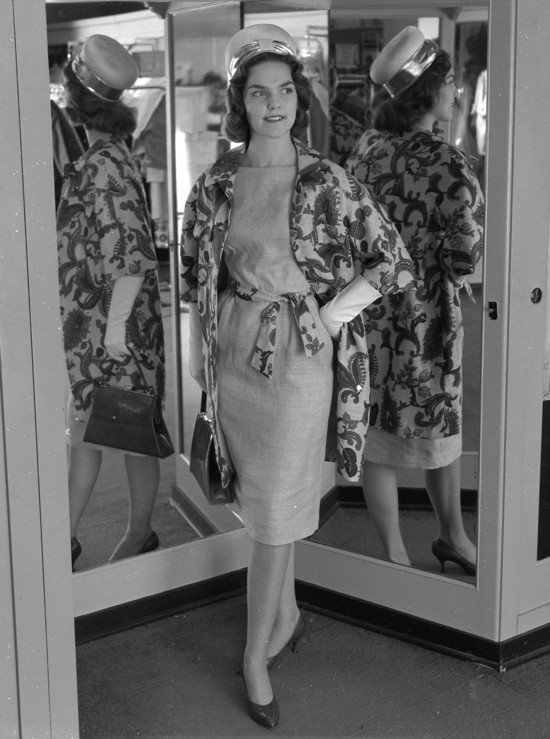 Betty Landre of Cape Girardeau phoned to identify the woman in the pillbox hat. She said it is Mary Ellen Hesskamp, a 1963 graduate of Southeast Missouri State. She was also a graduate of Central High.

Bob Krone had this to say about the woman in the pillbox hat: "This photo from your archives shown today at www.semissourian.com was likely taken in 1963 at the Cape Girardeau Main Street fashion store owned by Martin Hecht -- Hecht's -- to emulate the look of Jacqueline "Jackie" Kennedy, First Lady of President John F. Kennedy. This information was furnished by my vintage fashion expert associate, model, actress, and vintage fashion entertainer, Carol Ann Miller -- http://www.CarolAnnMillerFashionsOfThePast.com (Visit the five-page web site for more information." 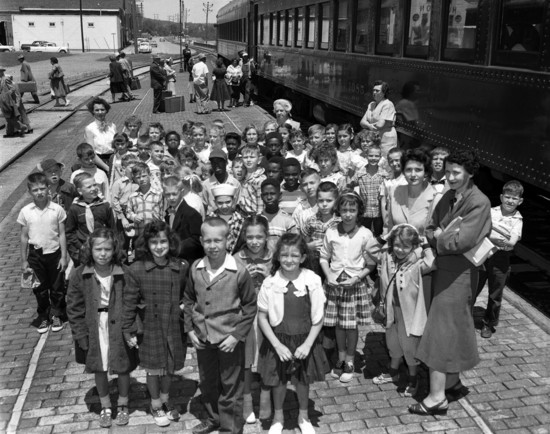 Linda Sanders said this was her class from May Greene School as it prepared to ride the rails to Chaffee. The woman in the white blouse, left side in the back of the group, is the teacher, Lillian Barks.

It was a great day Wednesday in the lives of these third and fourth graders of May Greene School as the small fry, accompanied by their teachers, Mrs. Loy Barks and Mrs. Ruth Deevers, took a Frisco train ride to Chaffee. The trip was the climax to a unit of study on transportation. 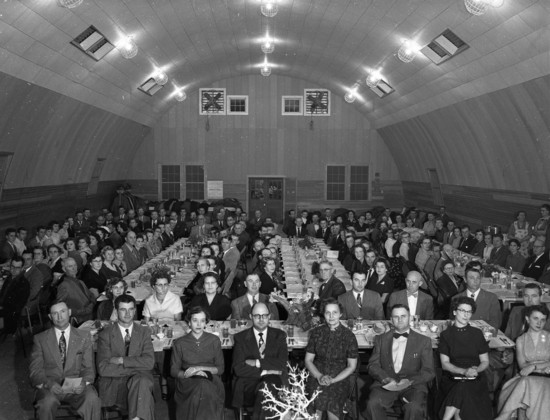 Jim Rapp confirmed this photo was taken in the Hanover Quonset hut. He thought it might be a Missouri Synod meeting. 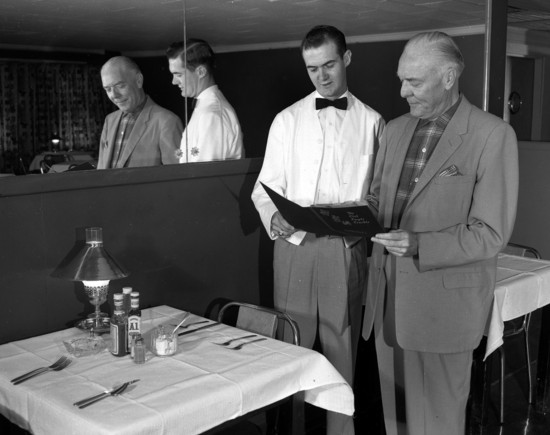 Matt Lingle says: "My father Ron Lingle is the brother-in-law of Bud Pierce, Purple Crackle owner, and worked with these two gentlemen at the Crackle in the 50's and 60's. The man in the white shirt is Alfred "Sonny" Wilson and the other gentleman was head waiter Paul Walburg." 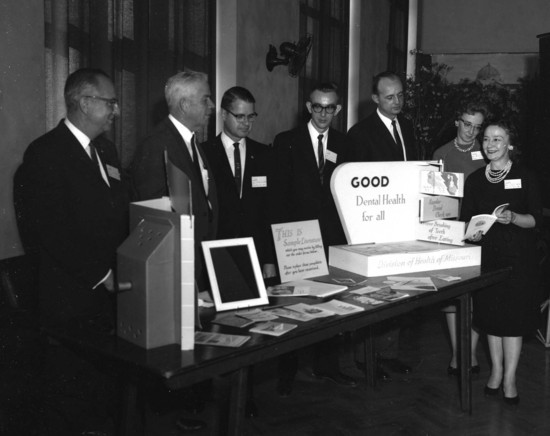 There was a full house for the district dental workshop at State College Thursday. From the left are Raymond Roberts of the State Department of Education, Jefferson City; President Mark Scully of the college, Dr. Del Brunton of Cape, workshop chairman; Bill Haman, instructor at Central High School, who gave one of the talks; Ralph Knowles of the Division of Health, Jefferson City; Miss Maxine Bounds, teacher at Fredericktown, who was on the program, and Mrs. Imogene Webb, an elementary grade supervisor, State College.