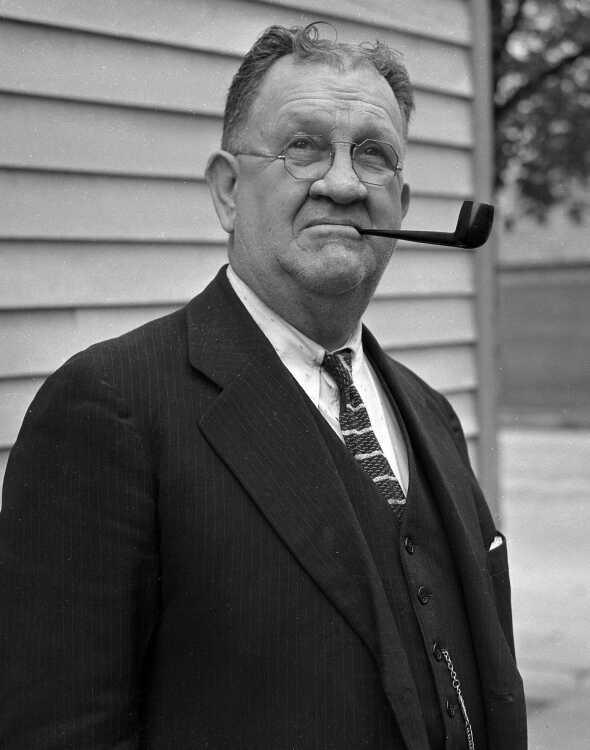 Veteran Cape Actor to Have Lead Part in Girardeau Movie

Casey Ransom, One-Time Hero of Melodrama Days of Stage, to Be Seen in Cape Film

After 30 years Casey V. Ransom is graduating from footlights to klieg lights. Popular comedian of past decades reaching into the Gay 90's, the Girardean, who brought laughs to stock company audiences in every state in the Union, in Canada and Old Mexico, is getting his chance in the movies. For Casey, fully recuperated from 22 years of road show dramatics, has come to bat again, this time as "Farmer Corntassel" in Cape Girardeau's own movie to be filmed next week.

Director Bob Marshman took one look at the Cape Girardeau grocer and exclaimed "He's my man!" Casey is just the man for the part, because Farmer Corntassel is one of those comedy characters of the movie who can get his action highlights over in ribtickling finesse.

In the movie plot Farmer Corntassel, on his way to Cape Girardeau in his battered and outmoded automobile, its creaking sides bulging with Mrs. Corntassel and their 14 little Corntassels, has to give a "lift" to thumb-waving Gary Owen, eminent movie director whose car has broken down on his way to Cape Girardeau, where he is bound to select a likely girl for a Hollywood movie contract. The scene, a delectable tidbit for fun lovers, involves an exacting rearrangement of the car's population in order that the director might be accommodated.

Mr. Ransom is particularly glad to get into action again. The popular Girardean, with his vast storage of stage wit, has always been a source of enjoyable human interest to Girardeans who know him. Early in life, he was only 14, when he entered upon a career of dramatics in his native Michigan, and in short order he graduated from side kick to a medicine show spieler to the legitimate stage.

In the days of the glorified old road shows, Mr. Ransom reached his zenith as the village postmaster in a happy melodrama that tumbled 'em into the aisles in scores of town halls all over the country, particularly in the East. From the road shows he zoomed up into the high class vaudeville field and, he recalled today, "I played about every part from Peck's bad boy to old maid." The old road shows had a fairly flexible cast and frequently illness or some other calamity forced on a versatile cast member the role of about every part in the production.

"I've played 'em all," said the Girardean today, and spoke with vivid retrospect of the days when he came to Cape Girardeau and skipped about the Old Opera House stage on Broadway. Mrs. Ransom played also in the productions along with Mr. Ransom and their friendship on the stage romanced itself to married life.

It was nearly 30 years ago that Mr. Ransom, playing in Cape Girardeau, took a walk with a fellow vaudeville artist down Main street and both remarked that "This sure must be a fine little Dutch town." When the actor was married he came to Cape Girardeau, after a honeymoon over the old circuits he used to play, and settled down to a normal business life. He purchased property and since has been operating the grocery and general store at 319 Good Hope street.

"I don't know how I'll make out in these here movies; it'll be kind of a new experience for me, so I reckon I'll just act natural like," he told a reporter.

Sharon Sanders has the full story about the Cape Girardeau film, "We're in the Movies," in her July 12 blog, From the Morgue.

After the film was shown at the Broadway Theater, it was noted in the story published May 16, 1940 that the film would be available to responsible parties and civic bodies to show.

We don't know if the film exists today.