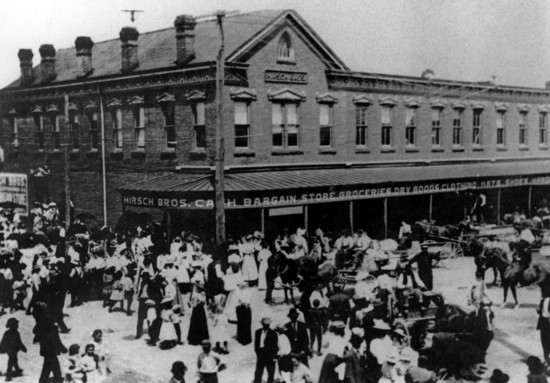 In 1876, the Centennial Store (later renamed Hirsch Brothers Store) opened at the northwest corner of Sprigg and Good Hope streets in Cape Girardeau. It was the year that the nation celebrated the centennial of its founding, and the opening of the store on Independence Day, along with that fact, brought its first name. The firm was founded by George Hirsch. (His son, Will Hirsch, is profiled below.)

George Hirsch sold the business in 1890 to his sons, John and William Hirsch. They formed a partnership and in 1897 it was incorporated as the Hirsch Bros. Mercantile & Provision Company, with William Hirsch as president. The stock was enlarged and included dry goods, clothing, shoes, women's wear, groceries, provisions, variety goods and almost every kind of merchandise. In 1924 it became Hirsch Bros. Company.

Hirsch Brothers, the enterprising merchants of Good Hope Street, will transform their big building into a still larger one, making it one of the best business houses in the city; J.W. Gerhardt has been awarded the contract; the remodeled structure is to be 110 feet long on Sprigg Street and 93 feet on Good Hope Street, and will be two full stories tall.

Delivery wagon of Hirsch's store is overturned when the mules make short turn on West Broadway. Bob Price, driver, caught under wagon, is not hurt.

Plans for remodeling of Hirsch building, Good Hope and Sprigg streets, to house expanded grocery business and large variety store, are announced by Judge Will Hirsch and his son, Alfred Hirsch, owners.

Despite the continued nationwide "bank holiday," merchants in Cape Girardeau continue doing business without a great deal of cash on hand; some are taking regular customers' checks for the amount of the purchase or for payment on account, but aren't taking checks in excess of the amount owed; Hirsch Bros. store on South Sprigg Street has started issuing scrip of its own, in denominations of 50 cents to $5, and payable to the bearer.

A lone customer from Chaffee is allowed in to purchase the last six cans of coffee at Hirsch's Thriftway in morning; for all intents and purposes, store closed its doors last night, ending 101 years of doing business at Good Hope and Sprigg.

Regional wholesale outlet is being established in Cape Girardeau by Baisch & Skinner, wholesale floral firm of longstanding in St. Louis; firm several weeks ago purchased former Hirsch Building at northwest corner of South Sprigg and Good Hope and is renovating both floors of structure for business. 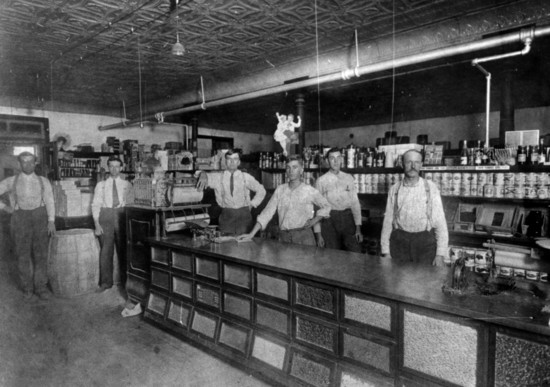 Employees of Hirsch Bros. Mercantile were shown lined up along a counter in the early 1900s. The man on the far right was Phil Lind. (Frank West photo) 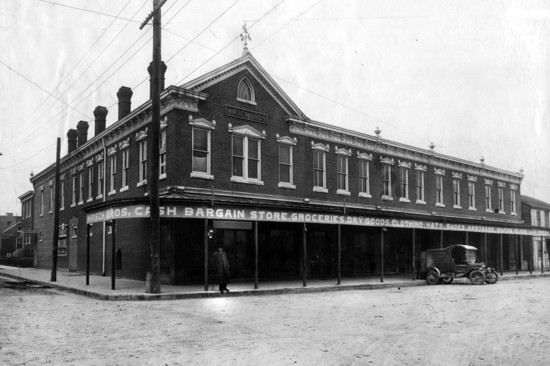 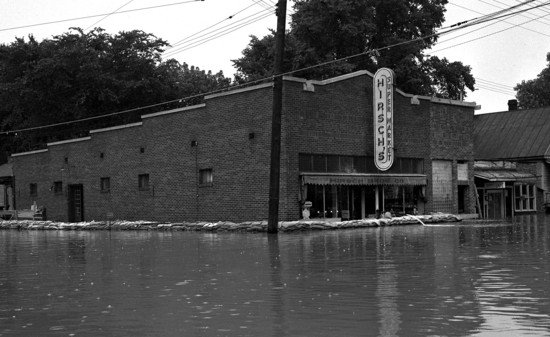 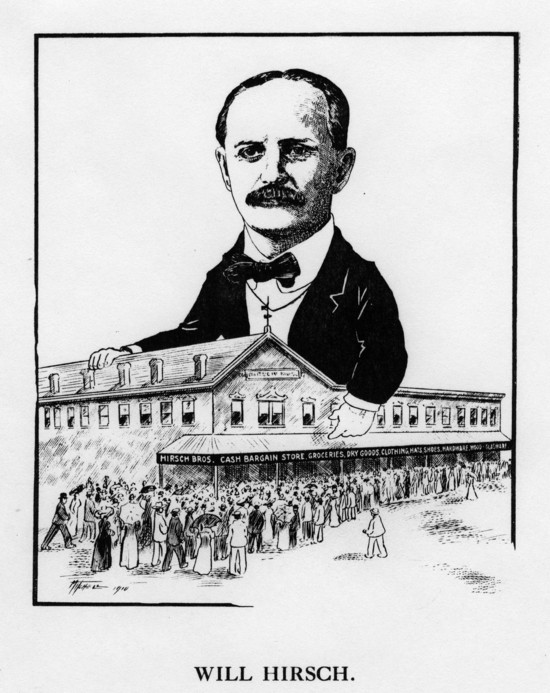 From "The Men of Affairs in Cape Girardeau and Cape County"

When one begins to recount the successful business men of Cape Girardeau, men who have made a success of their business and a success of their citizenship, among the first to be mentioned is Will Hirsch. He has made a great success of his store in Haarig and through strict business principles has built up a business that can not be excelled in all Southeast Missouri.

And while Mr. Hirsch was building up his business he took the time to build up a fine reputation as a citizen. He takes an active interest in every public movement, is always ready to do his part and contribute his share, and he's never too busy to get out and work for the benefit of any deserving cause. He is interested in several of the Cape's largest institutions and his advice is sought on all sides.

Not long ago when the republicans were seeking a candidate for county judge Mr. Hirsch finally said that he would serve if elected. When the primary was over the result showed that he got nearly all the votes polled, and the same will be true in the general election this fall.

One hundred years ago, The Daily Republican published a special feature, a series of drawings and biographical sketches of prominent men in the area. The Men of Affairs in Cape Girardeau and Cape County were "cartoon pictures" that were printed daily and published in a book. A total of 38 sketches were published starting July 18, 1910.

Here is a gallery of those sketches. 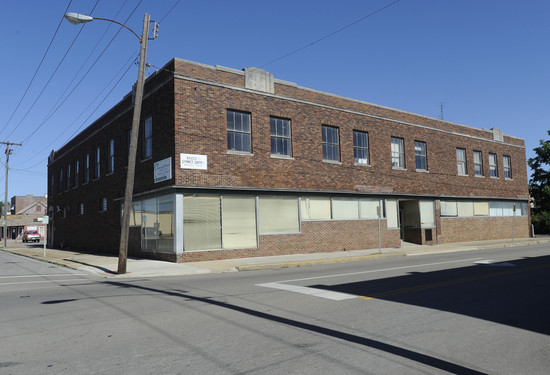