"King of the World" in Cape 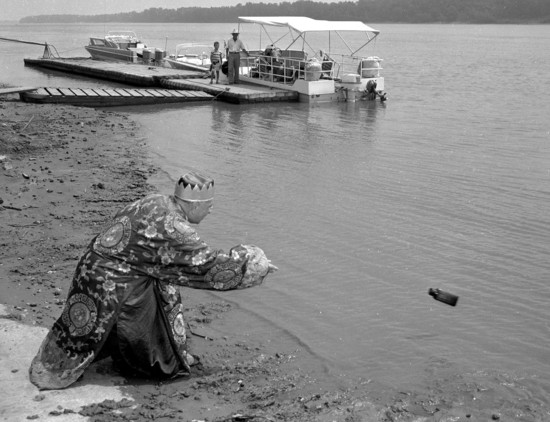 A bottle containing a message to Russian Premier Khrushchev is here tossed into the Mississippi river by Bishop Homer A. Tomlinson of the Church of God (Queen's Village, N.Y.). The bottle with its message, contents undisclosed, and a testament, is intended to float into the Gulf Stream, the Arctic Ocean and then the Russian port of Archangel, Bishop Tomlinson said, adding it fulfills a Biblical prophesy. The bishop is in the robes of his office, wearing a crown placed on his head shortly before the bottle tossing. He proclaimed himself "bishop of all churches of every faith in the world" Thursday, at the 56th annual meeting of the church at the Cape Girardeau church, 1000 Bend Road. (Aug. 18, 1961 Southeast Missourian, G.D. Fronabarger photo)

(More photos of the coronation are below.)

Editor's note: Bishop Homer A. Tomlinson was the Presidential nominee of the Theocratic Party, which he founded, in 1952, 1960, 1964 and 1968. Tomlinson stepped onto the world stage in a big way in 1966, according to this Associated Press story published in the Southeast Missourian on Oct. 8, 1966:

Bishop Tomlinson Names Himself "King of the World"

JERUSALEM, Jordan (AP) -- A Pentecostal bishop from New York crowned himself "king of the world" in a tourist hotel here Friday and invited the United Nations to move to Jerusalem.

Wearing a slightly bent crown of golden aluminum and sitting on a wicker throne, Bishop Homer A. Tomlinson took over the rule of the world and declared an end to disease and wars.

The bishop, 75, head of one branch of the Church of God, staged his coronation in the presence of a modest audience -- 12 disciples who accompanied him from the United States, 3 curious hotel employes, 3 bearded and puzzled priests from Jordan's Greek Orthodox Church, a couple from the American Express Co., and a half dozen newsmen.

Under the proposed rule of the new king, who calls himself "Brother Homer" instead of "his majesty," all nations would donate 10 per cent of their annual incomes to his government.

Countries failing to contribute will get no more rainfall, he says. The capital of the world should move to Jerusalem, he adds.

"This is for real," the bishop cried as he assumed his throne in a regal-looking red robe in the lobby of the Imperial Hotel. "This is the coming of the Kingdom of God on earth."

The bishop, whose Pentecostal followers were once known as Holy Rollers, reassured the audience that the present leaders of the world would keep their position under his reign.

Tomlinson first proclaimed himself king of the world outside a tobacco barn in Greenville, Tenn., in 1954. Since then he has traveled to scores of countries restaging his coronation, but the second crowning here was necessary to confirm his rule, he said, because King David was crowned twice in the Holy Land.

"I said to myself I guess this world needs a king," he said in a 40-minute speech. "Like one is called to be an artist, I felt called to be a king." 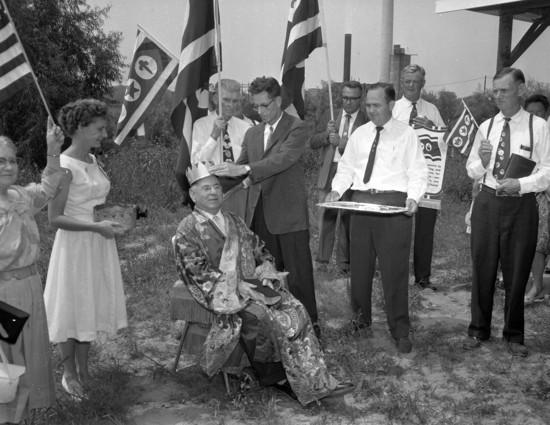 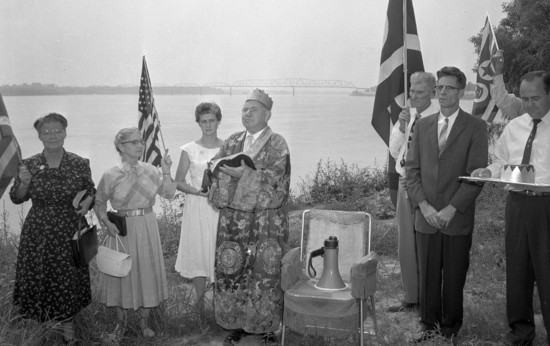 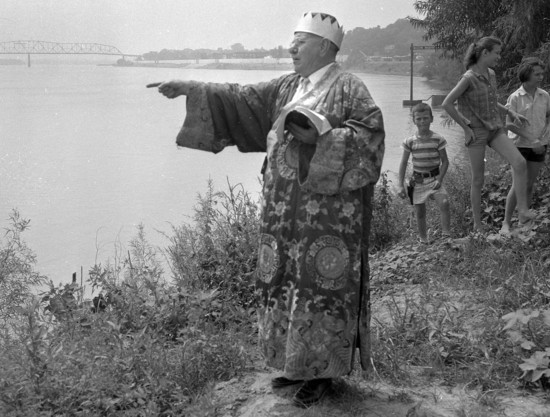 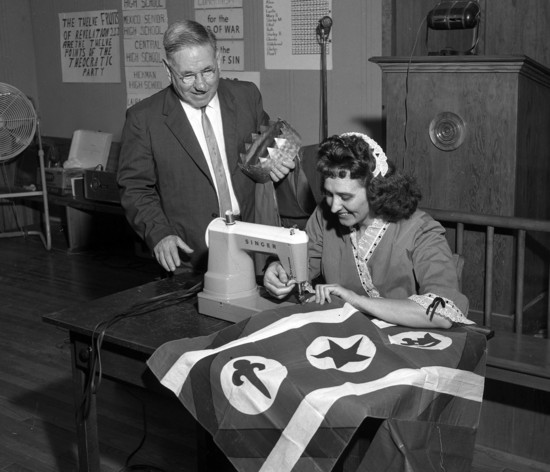 Dressed in the manner of Betsy Ross, Mrs. Voy M. Bullen of Childersburg, Ala. prepares the first "Banner of Peace" for the 57th Assembly of the Church of God. Directing her in the ceremony which took place Thursday, Aug. 16, 1962, at the local Church of God, 1000 Bend Road, is Bishop Homer A. Tomlinson of Queens Village, N.Y.