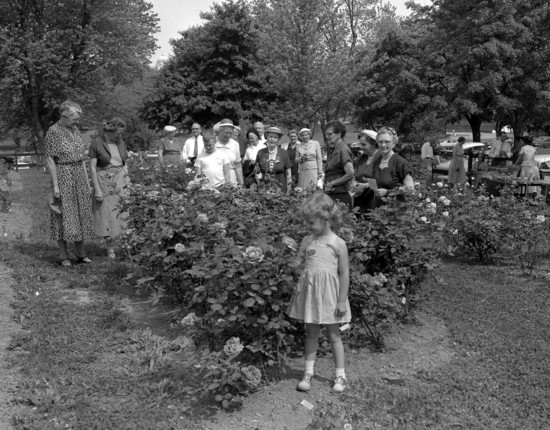 On a fine day, many came out for the annual flower pilgrimage Sunday. This is a group in an attractive spot in the official rose production test plot in Capaha Park on Sunday afternoon. Many others viewed selected places on Saturday. (G.D. Fronabarger photo)

Tourists Pour Into Girardeau for Annual Festival of Roses

The last horticulture specimen has been removed, the last of the arrangements classes--from "Kitchen Gadgets" to "Kaffee Klatsch," from "Antiques" to "The Modern Look"--have been taken apart, and the final curtain has been drawn on the 10th Annual Rose Festival and Garden Pilgrimage of the Council of Garden Clubs of Cape Girardeau.

The large number of tourists, and the many favorable comments heard, attest to the fact that this year's pilgrimage can go down in the record books as one of the most successful in the annals of local pilgrimages.

The Rose Display Garden proved to be the largest drawing card during the two-day event, according to Mrs. E.R. Roberts, general chairman. Saturday afternoon, despite occasional showers, it drew 142 registered guests. On Sunday afternoon, 477 signed the guest book, the majority of these signers representing out-of-towners. Mrs. T.G. Harris, who supervised the activities at the display garden, estimated there were an additional 200 local viewers who did not register.

These guests reached from coast to coast--Lakewood, Calif. was represented by Mr. and Mrs. Evan D. Reed, and the New Yorkers were Mr. and Mrs. T.J. Seabaugh and daughter, Karen. Other states represented were Texas, New Mexico, Kansas, Mississippi, Colorado, Arkansas, Kentucky and Illinois.

Missouri guests traveled from 40 different towns and cities to show their interest and approval of this annual affair. A large percentage in attendance visited gardens listed on the tour, as well as the Garden Center, where there was general admiration for the display booths and the flower show, especially the horticulture division.

[Mary Kay Gerhardt Welker identified herself as the child in this photo.] 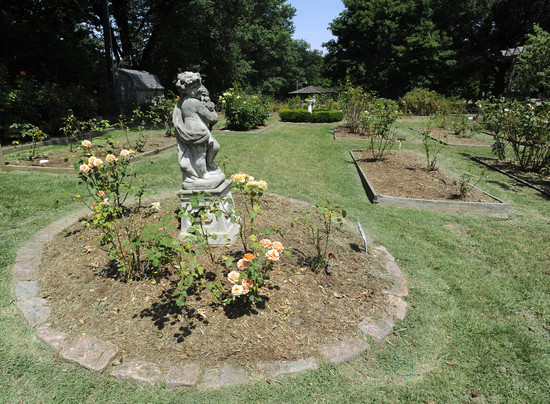 The following information was taken from a display board at the rose garden:

The idea for the Rose Test Garden was promoted by Mrs. Thomas G. Harris and Mrs. Chris E. Stiver, both members of the National Rose Society and charter members of the Cape Girardeau Garden Club, organized in 1931.

On April 25, 1953, the city of Cape Girardeau approved the selection of the northwest corner of Capaha Park for the garden. In 1954, the Council of Garden Clubs of Cape Girardeau allowed $1000 for the project. In 1955, 40 small beds, three round beds and 12 long beds were prepared and planted with 495 roses.

The garden was accepted as a national accredited Rose Display Garden in October, 1955, and is one of three test gardens in Missouri. The others are located in Kansas City and at Shaw's Garden in St. Louis.

Reader's Digest published an article about the garden in March 1961 that was read by 35 million readers.

Five garden clubs are responsible for the care of the garden, each caring for eight beds. They are Cape Girardeau, River Hills, Ramblewood, Four Seasons and Rose Hills garden clubs.

The heavy garden work is done by community service workers supervised by the rose chairman. The city sprays, mows and provides needed materials.

The River Hills Garden Club created a formal garden at the site of the former oval pool at Capaha Park in 1961. 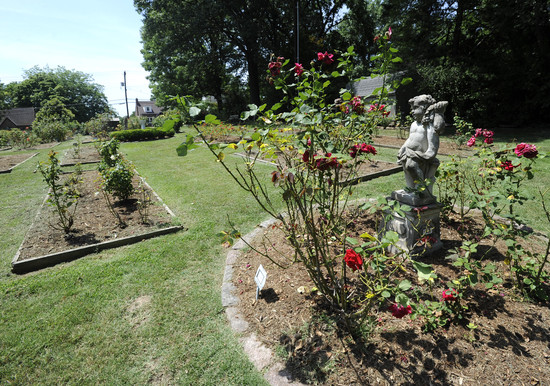 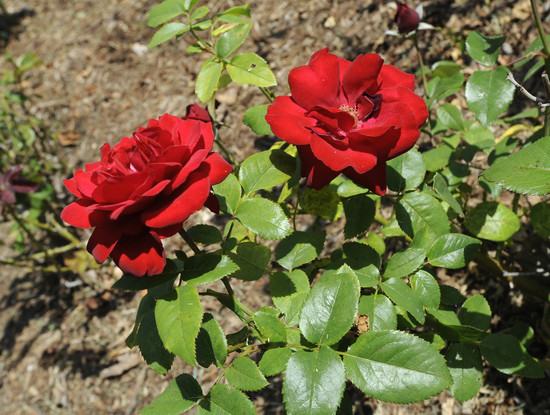