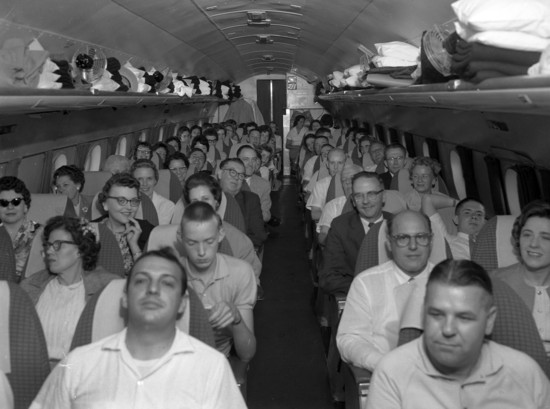 The Cape Choraliers settle into their charter flight to Seattle, Wash. for their appearance on Missouri Day at the World's Fair in 1962. The flight aboard the four-engine Constellation took about eight hours from the former air base at Malden, Mo. The group was ferried there from Cape Girardeau by members of the Aircraft Owners and Pilots Club of Cape Girardeau. (G.D. Fronabarger photo)

In this previous blog, the Choraliers perform at the World's Fair.

Choraliers Assured of Trip to Appear at World's Fair

The Cape Choraliers' trip to the World's Fair became a certainty at 11:15 this morning when the key men in the fund raising campaign totaled up contributions. Wayne Rust, who spearheaded the Kiwanis Club committee assisting the Choraliers, announced that $6,527.61 of the $7,500 goal has been subscribed.

The other part of the drive has been interesting for Girardeans in the extra seats aboard the 78-passenger Constellation plane the Choraliers have chartered. Of the 30 seats, only six are available, and it is the hope of the group that these will be filled before departure time from Malden at 5 a.m. Saturday.

If the seats are not filled, this means there is an amount of $1,200 to be met. "Persons who wish to contribute to the fund, to offset this deficit, may call Jack Palsgrove, Allen Robinson, Dr. Dan Cotner or myself," Mr. Rust said this afternoon.

A total of $1100 was realized on the citywide bread sale Thursday night. Many Girardeans helped in this drive, and the community generously gave their dollars to help out the Singing Ambassadors.

Choraliers and Kiwanians, their husbands and wives, kept at the bread selling until 9:30, when they were on hand to greet hundreds of townspeople as they left Houck Physical Education Building following Central High commencement last night.

Forty-eight Choraliers went about their work this morning still waiting final word. When it came they were a happy bunch of people, it was reported.

Departure time from the Malden air field Saturday morning is set for 5, Director Palsgrove said. Pilots of the Cape Girardeau Pilots Association will be at the Municipal Airport to fly the Choraliers and their friends to Malden. 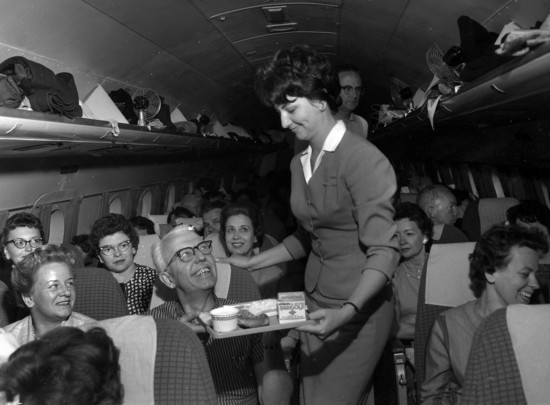 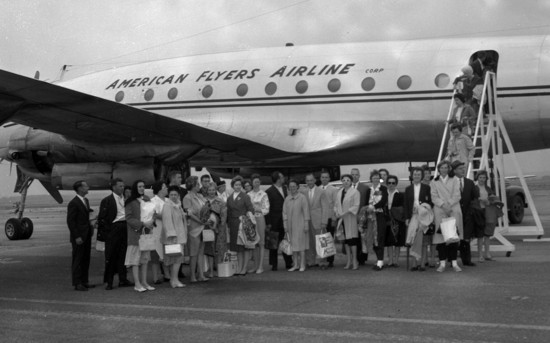 SEATTLE, Wash. --Flags of all the states whipped in a stiff, cool breeze this morning as the Cape Choraliers sang the stirring music of "The Battle Hymn of the Republic" to open Missouri Day on the colorful grounds of the World's Fair.

Gov. John M. Dalton, speaking in Missouri Day ceremonies from the State Flag Plaza, declared Missouri and Washington are historically tied together "by that long thin line known as the Oregon Trail."

In addition to the 48-member Choralier chorus, the Swagman trio from the University of Missouri and Westminster College, Fulton, were scheduled for appearance during the day.

The Choraliers also were scheduled for an afternoon appearance. Specialty numbers featured their forenoon program, while this afternoon the Holiday Montage and additional specialty numbers were on their song list.

Director Jack Palsgrove said the afternoon program would be dedicated not only to Missouri and Missourians in Washington, but particularly to the people of Cape Girardeau for their efforts in raising the funds to send the chorus here.

Cape Girardeau's Singing Ambassadors have made their presence known in this beautiful city on Puget Sound. Many went to the Century 21 Exposition shortly after arrival Saturday. Practically everyone had seen a part of the fair by Sunday night.

The group rehearsed Sunday night backstage in the new Seattle Opera House, which is one of the buildings on the grounds.

Several took an excursion ride in Puget Sound. Others made a bus tour of the city. Tuesday a number are making plans to take another excursion steamer from Seattle to Victoria, B.C., a 12-hour round trip that gives several hours in the Canadian City.

The weather here is cool, and those who wore wool are comfortable. Temperatures go into the 60s and low 70s in the daytime, but drop into the 50s in the evening. There has been no rainfall since the Choraliers arrived.

The fair's attendance topped the 2 million mark on Sunday. Girardeans found the crowds were large, but not uncomfortable. There is a waiting period for many things, but not as extensive as many had feared. Several sent atop the Space Needle.

Burleigh Arnold, assistant to Gov. Dalton, came to the Oxford Hotel, where the Choraliers are staying, on Sunday. The singers met Gov. Dalton today as they gathered to sing in the State Flag Plaza, a rectangle filled with flagstaffs, each flying the colors of a different state.

The attendance at the fair Monday was 68,552, the largest weekday crowd since the fair opened in April. 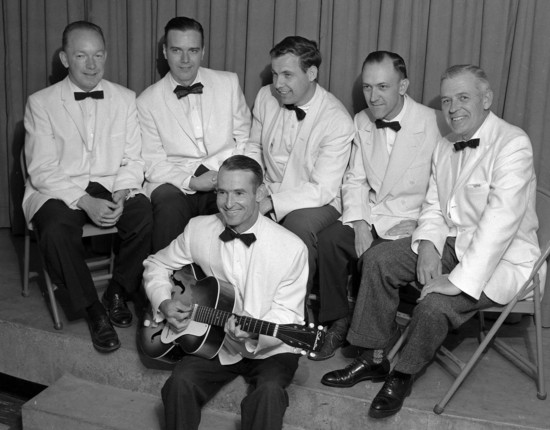 Singing a "Men's Medley of Old Favorites" in the Cape Choraliers' Spring production Tuesday night at the State College auditorium will be a group of Girardeans, some of whom are pictured here, from the left: Jack Palsgrove, Dr. Earl Johnson, Stephen Limbaugh, R.G. Wagoner and Crawford McClue, and with the guitar, Henry Creighton. The variety program will start at 8 o'clock and will feature a number of other specialties, as well as choral selections by the 50 Choraliers.

Choraliers to Give 1960 Variety Show

Putting their Spring production into a garden setting, the Cape Choraliers will "sing out" with their 1960 variety show Tuesday night at State College Auditorium. Curtain time is at 8, and tickets will be sold at the door.

Dr. John T. Crowe will lead the audience in a pre-show warm up song with Dr. Earl Johnson at the piano. Bill Rader will be master of ceremonies for the Choraliers' informal garden party, introducing the various specialties.

Performing for the first time will be a Men's Medley of old favorites featuring guitar accompaniment by Henry Creighton, and also a Ladies' Trio composed of Mrs. Fred Rieck, Mrs. Doyle Dumas and Mrs. Dick Brase.

Back again this year is the Daydreamers Quartet--Mrs. Rush Limbaugh Jr., Mrs. James A. Kinder, Mrs. Charles Brune and Mrs. Mary Harrison--and there will be vocals by Mrs. Emmett Young, Rev. Don Peluse and Gary Rust, who were well received in last year's production.

Newcomers to the Choraliers' solo spotlight will be Stephen N. Limbaugh, tenor, and Mrs. Kenneth Scherle, soprano, and joining in the entertainment fun will be the Choraliers' director, Jack E. Palsgrove with a baritone solo.

Mrs. Jack Palsgrove and Mrs. Erwin Buchnan are accompanists in the program. Dress rehearsal will be held at 7 Monday night, it was announced. 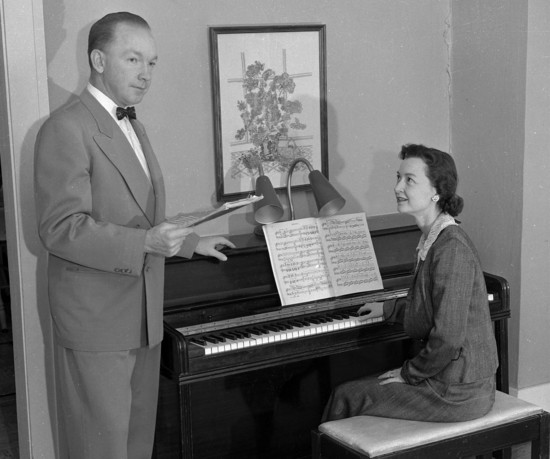 Mr. and Mrs. Jack E. Palsgrove, 1218 Normal, in guiding the Cape Choraliers through 11 years of continuous singing in this community, have put in many hundreds of hours working with the amateur group, said to be the oldest active choral organization of its kind in the state. Just now Jack and Susie Palsgrove are keeping their 48-voice chorus busy with rehearsals for the forthcoming program, and the Choraliers will sing at the World's Fair in Seattle.