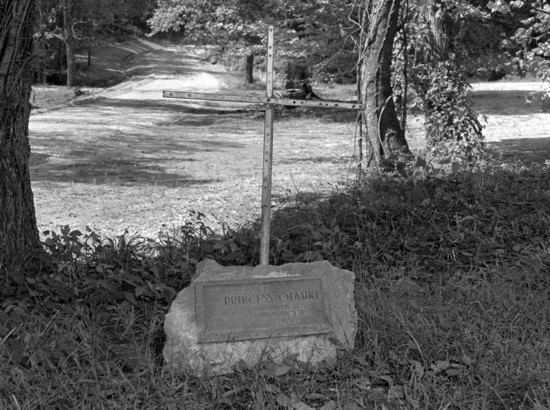 This marker shows the approximate location of the grave of the Cherokee Indian princess, Otahki, and there is considerable agitation for an attractive marker of larger size to permanently identify the spot. In the background is shown the newly finished Moccasin Springs Road. This marker was provided by the Girl Scouts. (G.D. Fronabarger photo)

The story of the Indian princess buried in Trail of Tears State Park outside Cape Girardeau got its start in the 1830s, when 16,000 Cherokees were marched 800 miles on foot as part of a relocation project. About 4,000 Cherokees lost their lives on the trail, including a "princess" named Otahki, according to legend. While the burial site is real, according to park representative Susan Kelley, the legend is not completely accurate.

"There was no royalty in the Cherokee culture, so there could not have been a Princess Otahki," said Kelley. Kelley believes the name "Otahki" was actually given to the woman by the local settlers. According to the park's official explanation, the woman's real name was Nancy Bushyhead Walker Hildebrand, who, depending on which history book you read, was either the sister or daughter of the Rev. Jesse Bushyhead, an ordained Baptist minister who led one of the detachments on the Trail of Tears.

Nancy Hildebrand died after crossing the Mississippi River and camping in what is now the state park. Her husband and brother set up a wooden marker at her grave site, which was then maintained by the local people. Visitors to the park can stop by the site of her burial, where a pagoda was erected in 1961 in memory of the Cherokee who died during the march. In 2001, the site was named "Bushyhead Memorial" to clarify the story. 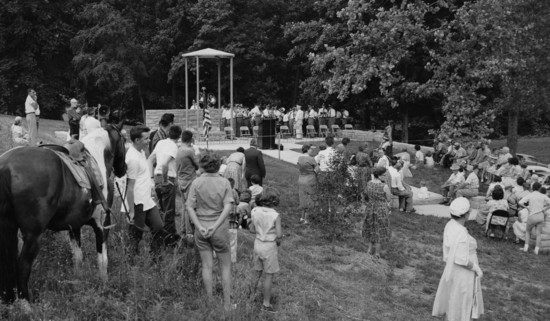 Dedication of Otahki memorial at Trail of Tears State Park, May 27, 1962. 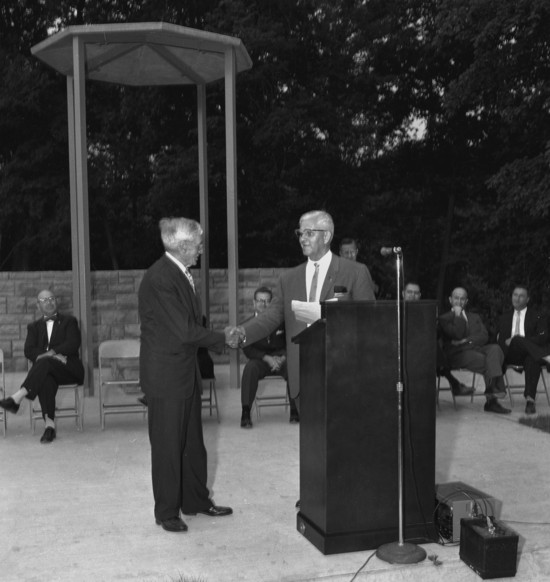 Charles W. Boutin of Cape Girardeau, left, a former member of the State Park Board and one of those most active in securing establishment of Trail of Tears State Park, received from Justice N.B. Johnson of the Oklahoma Supreme Court his designation as an honorary member of and a goodwill ambassador for the Cherokee nation. Justice Johnson, himself a Cherokee, gave Mr. Boutin the name "Owahale," a Cherokee name meaning power, leadership and influence. It was at the dedication of the Princess Otahki memorial monument. (G.D. Fronabarger photo) 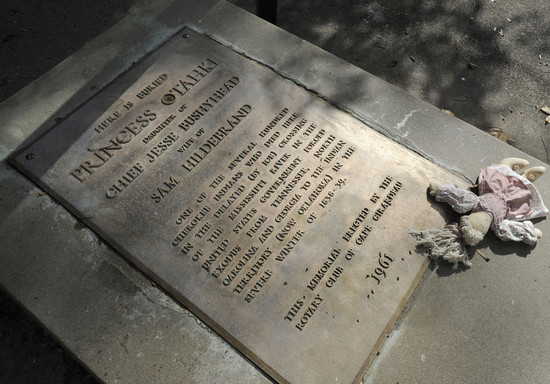 One of the several hundred Cherokee Indians who died here in the delayed (by ice) crossing of the Mississippi River in the United States Government forced exodus from Tennessee, North Carolina and Georgia to the Indian Territory (now Oklahoma) in the severe winter of 1838-39.

This memorial erected by the Rotary Club of Cape Girardeau, 1961. 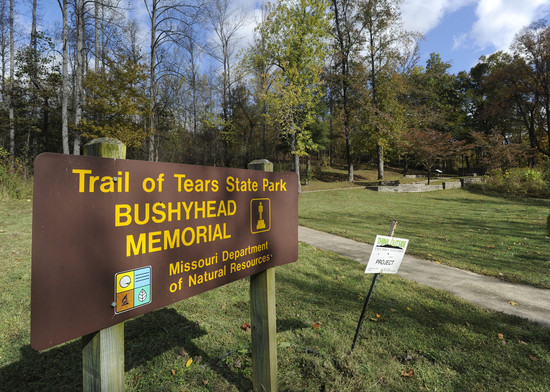