"The Temple of Rest" Mausoleum

"The Temple of Rest" is the name selected for mausoleum being erected in New Lorimier Cemetery. Mrs. M.E. Douglass suggested the name and was given $5 the company had offered. 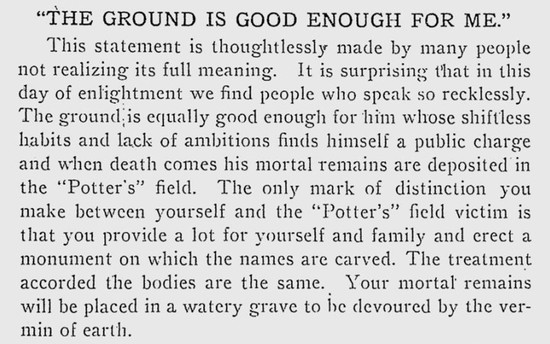 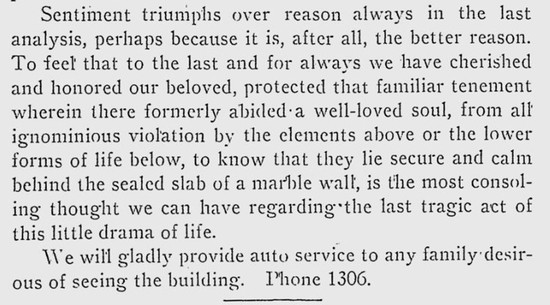 Five Bodies Are Removed to the New Mausoleum

Five bodies were exhumed at the cemeteries this morning and removed to the new Mausoleum to be placed in tombs there for their final resting place. The bodies exhumed were those of Mrs. William Bohnsack, Jr., Mr. and Mrs. Henry Thiessen and children of Mr. and Mrs. William Vedder and Mr. and Mrs. M.D. Wilson. There are now ten bodies in the new mausoleum, nine of them having been removed from graves in the Lorimier and Fairmount cemeteries. Undertaker Al Brinkopf had charge of removing the bodies.

Mausoleum at Cemetery to be Improved

A meeting of mausoleum crypt owners was held at the Chamber of Commerce rooms last evening and a permanent organization perfected for the management and control of the building in the future. A constitution and by-laws was adopted by a majority of the crypt owners and a board of trustees of five members was elected. This board is composed of Mesdames L.J. Pott and William Christopher, and Messrs. E. Drusch, Chas. L. Harrison and Wm. Vedder. After the meeting the trustees convened and elected Charles Harrison, president, E. Drusch, vice-president, and Mrs. Pott secretary-treasurer.

For a year or more it has been noticed that the mausoleum needs repairs and as no permanent management had ever been decided upon, W.H. Harrison took the matter up and had a contractor make an inspection of the building and give him a written report of what is needed. This report was read and it is estimated the repairs will cost between $400 and $500.

The men who built the mausoleum deposited with the Trust Company $2000 to be kept as a permanent fund, the interest from which was expected to keep the building in good condition. This money draws 3 1/2 percent interest and this money is turned over to the Cemetery Improvement Association, which was delegated as caretaker by the Trust Company. This interest money is not sufficient to meet the cost of upkeep and therefore Mr. Harrison took the initiative in calling the meeting to see what the crypt owners desired to do.

The board of trustees will now go into the details carefully and as soon as possible will call another meeting of crypt owners at which time the details will be submitted for consideration. The constitution provides that the yearly assessments shall not me more than $2.50 per crypt and it is known that such an assessment would enable the officers to put the building in the best possible condition.

The constitution also provides that all flowers shall be removed within 48 hours after a burial and that no metal frames be permitted to remain in the building, as the white marble stains very easily.

There are 206 crypts in the mausoleum and it was stated that all but 34 have been sold. Al Brinkopf and J.H. Rhodes of St. Louis own 34 crypts that are for sale. There are 54 individual crypt owners. 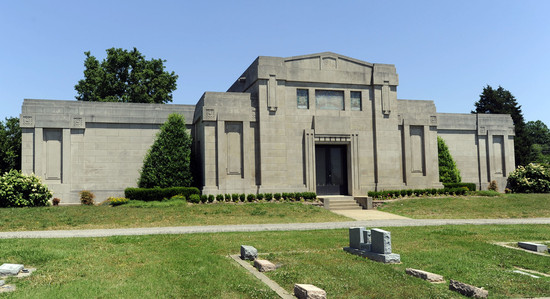