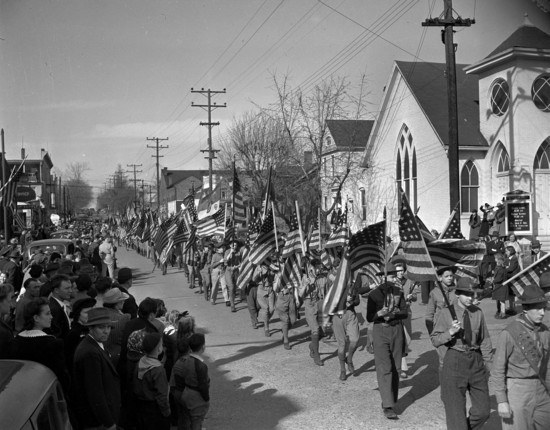 In the above scene, photographed at the intersection of Sprigg and Themis streets, hundreds of Cape Girardeau Boy Scouts are shown bearing massed colors Tuesday afternoon in the big War Rally parade as a crowd estimated from 20,000 to 25,000 persons stood along the line of march. The event was sponsored by the Marine Corps League. (G.D. Fronabarger photo) 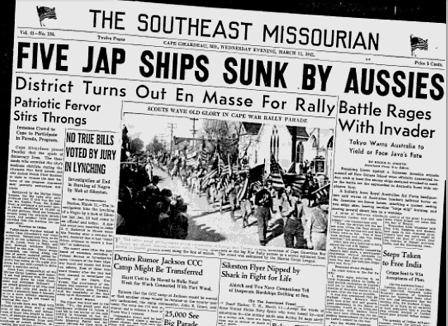 Cape Girardeau proved Tuesday that the spirit of democracy lives. The thousands who crowded the city's business districts during the afternoon War Rally parade and who packed Houck Field Stadium at night to witness the final features of the program expressed their patriotic enthusiasm definitely.

Sponsored by the Marine Corps League, the big rally also gave evidence that if this was the test for the Middle West, the Middle West is certainly a patriotic spot. A crowd, estimated at 20,000 to 25,000 persons, lined the business streets along the two-mile parade route, and another 7,000 persons crowded into the stadium for the night show.

Tailor-made weather helped to make Cape Girardeau's war event a success. Delegations from as far south as the Arkansas line, north to St. Louis, west to Rolla, and east through southern Illinois, flocked to the city. Heavy wraps discarded, the crowd along the line of march enjoyed spring before its official arrival. The atmosphere was cooler at the night program, but not cold enough to drive away a capacity crowd.

Jesse Tow, commandant of the Marine Corps League, said today: "I am well pleased with the demonstration given by Cape Girardeau and southeast Missouri. I am deeply grateful to all who took part in this rally and made it a success. I sincerely hope it brought to us a more definite realization that we have a big job ahead in winning this war."

The parade here was filled with school bands from over a wide area of the district, and delegations of those who fought in other wars, of employe groups in the city and various business firms and hundreds of school children, including Boy and Girl Scouts, made up the line of march. All three branches of the military service, Army, Navy and Marine Corps, were represented.

While music welled up along the parade route, the skies above the city were filled with the drone of the motors of 17 airplanes, all from the Consolidated School of Aviation, Inc., here. The planes circled at a 2000-foot elevation during the event.