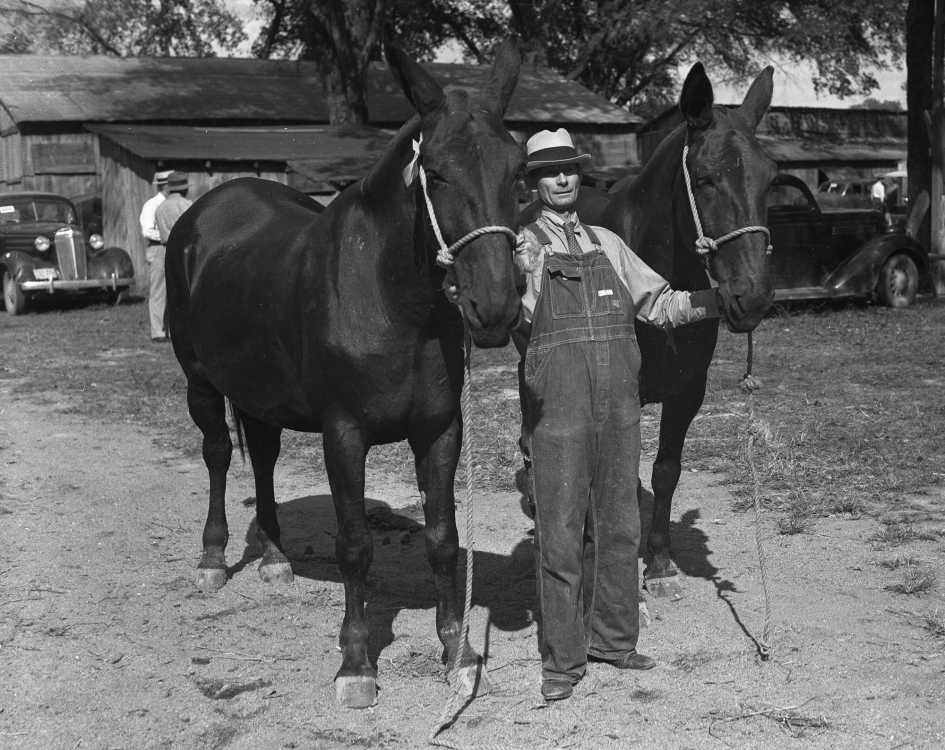 We had wondered if G.D. Fronabarger made this picture at the Anderson Horse & Mule Commission Co. yards.

Frony actually took the picture at the Bollinger County Fair at Marble Hill. It was published in the Southeast Missourian on Sept. 16, 1938. Here is the caption:

Judges had a job on their hands when they picked the champions in the livestock show at the 10th annual Bollinger County Fair. About 300 head of livestock are on exhibition...At the lower right is Herman Birkman of Laflin with the show's best pair of mules. The animals are 8 and 10 years old.

Here is the original blog story about the mule auction:

The crack of stout whips, shouts of wiry and portly stockmen, shuffle of feet and stamping and neighing of horses, the staccato bark of auctioneers and the drone of conversation in the bleachers--a jostling, living, colorful but extremely efficient scene.

That is auction day.

To Cape Girardeau had flocked horse and mule buyers from seven states. And in a day of spirited bidding these stockmen purchased nearly 500 head of horses, mostly halter-broke chargers from the dust bowl plains and rough slopes of the Rockies. All day Wednesday the scene went on at the Anderson Horse & Mule Commission Co. yards on Highway 61 west of the city where Cape Girardeau's new industry, the commission sale of horses and mules has in two years grown to almost national significance.

Money changed hands quickly, freely. The steeds paced through the ring in the sales pavilion at clock-work intervals, hardly two minutes being required for a sale. From $10 to the limit went the bids, a pair of mares from Springfield, Ill. selling to "Boss" Jones, big stockman at Union City, Tenn., for $350. to top the day's listing. Next was a pair of black and white marked mares sold to Charles W. Boutin of Cape Girardeau for $300. Mr. Boutin will place this team, fresh from Nebraska's plains, on his farm west of Jackson.

Five hundred stockmen and other persons, including many Cape Girardeau business men, crowded into the sales pavilion Wednesday afternoon and today a new crowd came, mule buyers from a fair portion of the Middle Western and Southern states, to attend the mule auction and make their offers for the 275 head of mules to be sold. Also an additional 100 Western horses arrived for today's auction.

Every week this is the scene in Cape Girardeau, now the leading commission market for horses and mules in this section of the country. Many traders attending the sale remarked that more mules and horses are sold in Cape Girardeau than at markets in St. Louis or Memphis. The auction is started every Wednesday and virtually every sale requires two days, the horses being sold first and the mules next.

Watching over the scene is Tillman Anderson, head of the commission firm. Mrs. Anderson is the auction clerk.

There's no prolonged dickering and dallying to a sale. As soon as those traders "lamp" the horses they know exactly if they are the animals they want. One horse will be led through the entrance door. A few indifferent bids will go up then all is quiet. The auctioneer wastes no time, the animal is "knocked off" to the last bidder. Another, a prancing spirited nag, is led in. Hands go up; whips crack and figures mount. It's all over in two minutes and out goes the animal while the successful bidder hands over to the clerk his ticket and smiles with satisfaction as he pays a fancy price for a fancy animal.

Today the bidders were looking over the lot and picking out the "streamlined" mules. These mules, from 4 to 6 years old and weighing from 1050 to 1200 pounds, are light and good looking. They're in demand, particularly by southerns who want them for the cotton plantations of the South. The heavier mules are not so much in demand, as they are slower and there is less heavy work to do now for them, much of this labor being taken over by tractors and other machines. Most of the mules come from Missouri and the states immediately adjacent, while the horses are shipped from the Dakotas, Montana, Oregon, Nebraska, Wyoming, Colorado and Kansas.

March 6, 1941: Initiating what may prove to be sizable development and boon to raising of fine show horses in Cape, Tillman Anderson of Cape Horse and Mule Commission Co., has purchased 4 1/2-acre tract in Rodney Vista area near new city park and will begin construction of eight-stall barn Monday to house show horses.

March 22, 1941: U.S. Army has notified Tillman Anderson, manager of Cape Horse and Mule Commission Co. on Highway 61, that its buyers will be here next month to purchase horses and mules for military service; no gray mules are wanted, however; according to old Army tradition, they stand out in battle "like a pair of long handles flapping in the breeze on a dark winter night."