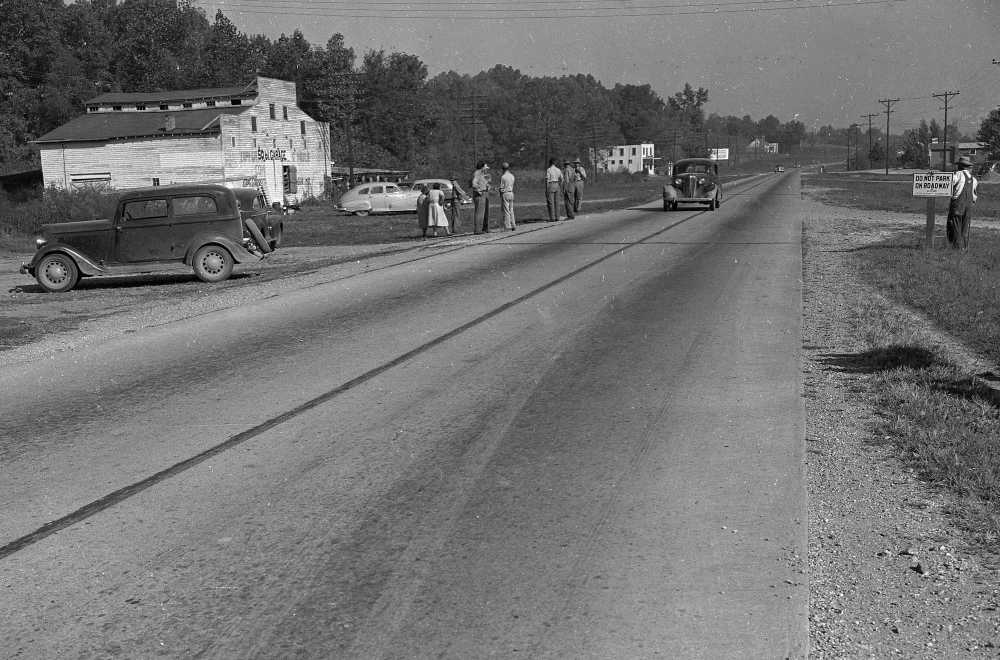 This picture was taken on South Highway 61 on October 21, 1947 by G.D. Fronabarger at the scene of a fatal accident.

Underneath the lettering "So. 61 Garage" on the building can be seen part of the former business: Cape Girardeau Horse & Mule Commission Co.

Our librarian, Sharon Sanders, asked Roy Kinder for his thoughts on the photo:

"Here is what I see: The photograph is looking north on then Highway 61. The date is in the mid-1940s, possibly 1943 or 1944. The cars appear to be 1930 models, even the light colored model which I believe is an early Chevrolet.

"The building most likely is the Anderson Commission sale barn dealing at an earlier time in horses and mules.

"The building in the far background is the Harry Wellman store, a sort of 7/11 of the time. The exciting view for me is the tree covered hillside behind the store. This is the location of the Gypsy camps that Don Seabaugh and I did the article September 8, 2006 with Jennifer Freeze a few years ago. Fred was along then and did pictures. The store was just north of the present intersection with Silver Springs Road. Of course the hill is gone. Wellman's store was located at the Benton Hill Road and Highway 61...not Bloomfield Road. Silver Springs Road then stopped where it joined Benton Hill Road at the Career Center School. It later extended to Highway 61 when the Benton Hill Road was closed due to I-55.

"In the mid-1940s I was in the mid-elementary school years at Marquette School. Sometime in those years an accident occured involving a student running to catch the Marquette bus which would have been traveling south picking up students. The bus first picked up high school students taking them to the College High school. My older sister was one. On the return trip I was one of the first to be picked up living at the location where Heuer Sons Implement is now located.

"On one morning student (Thelma) McNeely, (5 1/2-year-old) daughter of George and Bernice "Blondie" McNeely was running from the east side of the highway, coming from her home on Marquette drive. She ran in front of a car which was passing the stopped school bus, was struck and (I think) killed instantly. (before passing school buses became a crime).

"Students on the half filled bus never knew of the tragedy until later since the bus driver was told to take his bus on to school. I'm sure I was on that bus.

"This may be the event that seems to have brought attention to this roadway location. From what I can see this would be the exact spot where the little girl would have been boarding the bus--coming from a lane that ran beside the Mark Twain night club from her home on Marquette drive."