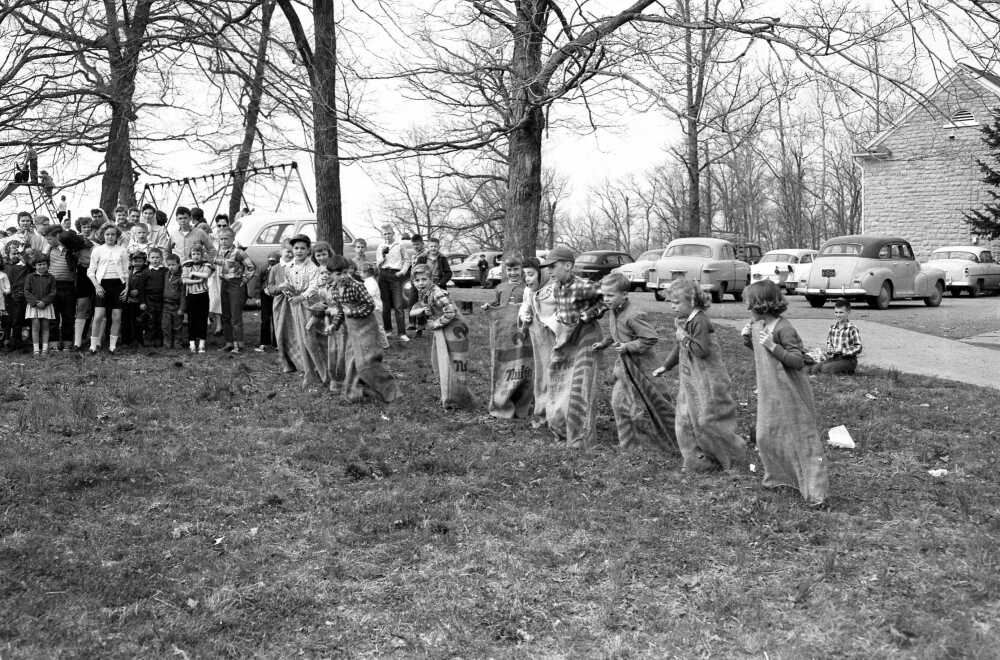 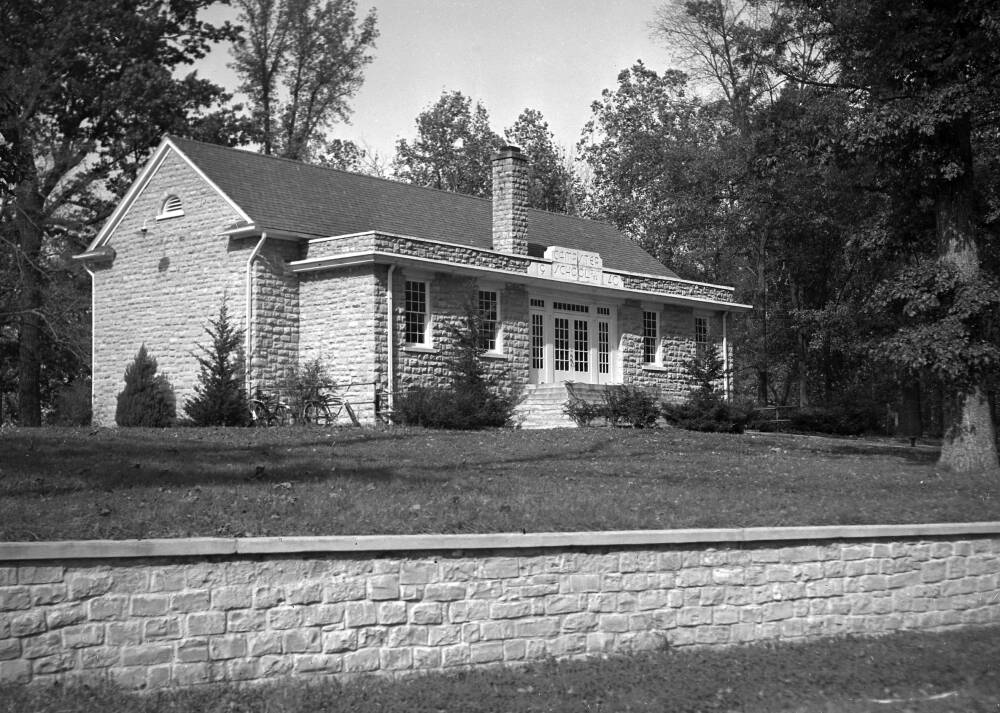 1940 Bonds to cover part of the cost of construction of a $25,000 school building for the Campster School District southwest of Cape Girardeau have been sold to the Cape County Savings Bank of Jackson; the issue is for $8,000 and the rate of interest is 3 percent, with the purchaser paying a premium of $80; the bonds will run for a period of 16 years; the WPA proposes to spend $17,000 for labor and some materials; the school will be built of concrete and stone.

1940 Campster School was rebuilt by the WPA. Stone used in its construction was purchased in Perryville, Mo. Consisted of two rooms.

Oct. 26, 1946 Whatever area city might take into its corporate limits by annexation would become part of Cape Girardeau Public School District and its school age children would be required to attend local schools; City Engineer John R. Walter says this will be one of large problems facing city in its annexation move; he points out that at least part of both Kage and Campster school districts would lie within area which would likely be included in annexation.

May 12, 1947 Affairs of three rural school districts, tangled with those of Cape Girardeau district as a result of city annexation of part of each, are cleared up somewhat as result of conference at Central High School of representatives of the four systems; at least two districts, Campster and Kage, will continue for this school year as before, receiving the tax money paid within the district and assuming the obligations of supplying school training to the children; Juden District, which has two buildings, also will continue as before for a year, but must find a building to house pupils attending Juden No. 2, since this structure was annexed by the city.

April 12, 1954 Possibilities of consolidation or annexation to combine Campster, Pecan Grove and Abernathy School districts west of Cape Girardeau into single unit are explored by approximately 75 residents of three areas at meeting at Campster School; only decision made is to drop any further consideration of proposal for a while until those living in areas have opportunity to consider and talk over alternate possibilities.

Jan. 6, 1959 The Cape Girardeau School District will add $748,421 to its assessed valuation this year through the recent city annexation of territory that included parts of four rural school districts: Campster, Kage, Juden and Marquette.

Aug. 24, 1959 Campster School on Bloomfield Road will have its first full day of classes Aug. 31; about 23 students will attend the school this year.

May 10, 1966 Kage and Campster elementary schools lying outside Cape Girardeau will be closed during next school year and their pupils will attend city schools at tuition cost to rural districts; this arrangement, requested independently by Kage and Campster boards of education, was approved by Cape Girardeau Board of Education Monday... The Campster School, located on Bloomfield Road southwest of the city limits, was ordered closed for the next school year by the State Department of Education because its average daily attendance this year is below 15. The enrollment this year in the elementary grades is 14.

The tuition charges to be paid by the two rural school districts to the Cape Girardeau system will come from the proceeds of their tax rates, $1.10 per $100 valuation at Campster, and $1.60 at Kage.

The Cape Girardeau system will receive a flat grant from the state for each of the Kage and Campster children attending the school, and this amount will be deducted from the tuition charge.

Mr. House said bus transportation will be extended to the Kage and Campster areas next year...

Aug. 18, 1971 Campster School building, no longer used for classrooms, will be utilized as day care and development center for handicapped children by United Cerebral Palsey; supervisor is urgently needed if organization's plans are completed to open center in near future.

Nov. 29, 1971 The United Cerebral Palsy Development Center of Cape County in the Campster School on Bloomfield Road was officially opened with an open house attended by about 75 people. There will be four children starting classes at the center this week, and it is expected that eight will be attending by the spring.

June 17, 1988 Recognizing a decreasing need for services, the United Cerebral Palsy Center of Cape Girardeau has closed its doors and returned funds to the community... The center turned over $3,018 to the Area Wide United Way. The center also donated supplies and equipment valued at $3,300 to Parkview State School for the Handicapped...(Board President John H.) Wiseman said the center actually stopped providing services about a year ago... The center was created in 1971 by a group of businessmen. Oscar C. Hirsch, then owner of KFVS television, agreed to hold a United Palsy telethon to raise funds to open a cerebral palsy center locally on Bloomfield Road...The center provided services to clients at no cost...

May 27, 1993 Campster School, owned by the Cape Girardeau Public Schools district, has been designated surplus property and is for sale. The minimum bid is $75,000.

Feb. 15, 1994 The Campster School property on Bloomfield Road has been sold to Jane Cox of Chaffee, Mo., for $67,750. One from the sale has been earmarked for renovations at the Central High School auditorium. 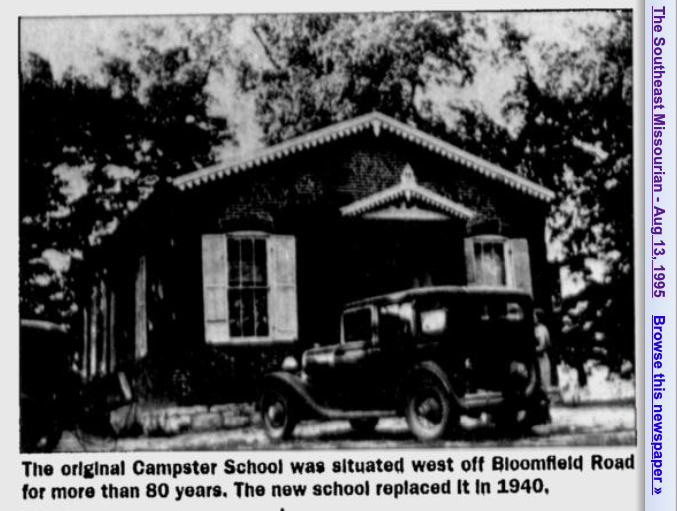 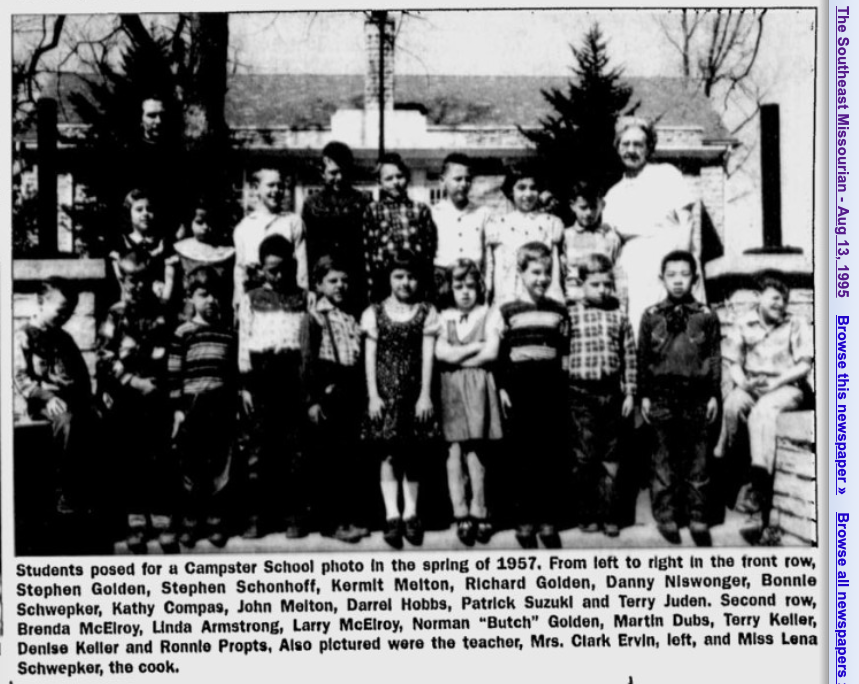 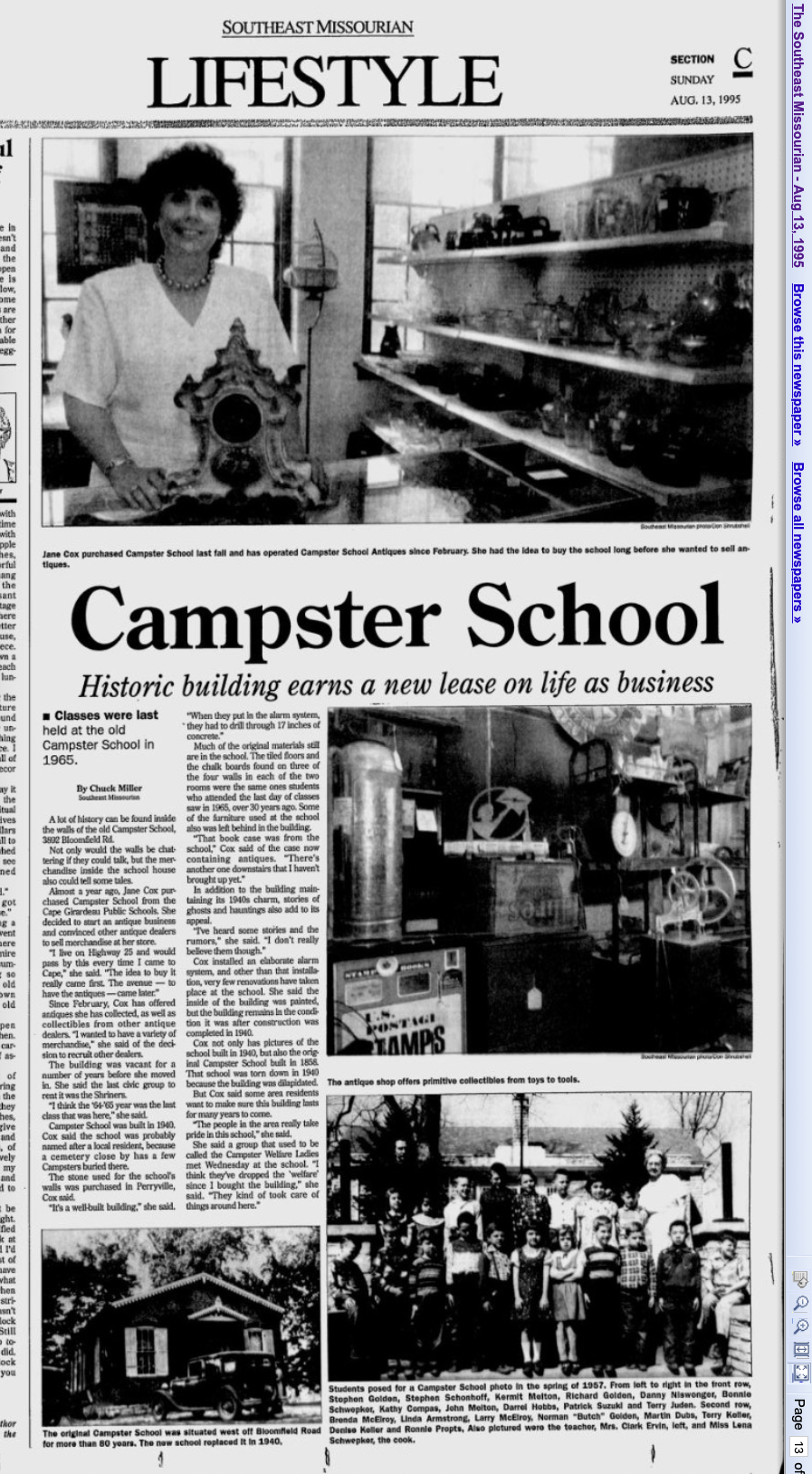 A lot of history can be found inside the walls of the old Campster School, 3892 Bloomfield Rd.

Not only would the walls be chattering if they could talk, but the merchandise inside the school house also could tell some tales.

Almost a year ago, Jane Cox purchased Campster School from the Cape Girardeau Public Schools. She decided to start an antique business and convinced other antique dealers to sell merchandise at her store.

"I live on Highway 25 and would pass by this every time I came to Cape," she said. "The idea to buy it really came first. The avenue -- to have the antiques -- came later."

Since February, Cox has offered antiques she has collected, as well as collectibles from other antique dealers. "I wanted to have a variety of merchandise," she said of the decision to recruit other dealers.

The building was vacant for a number of years before she moved in. She said the last civic group to rent it was the Shriners.

Campster School was built in 1940. Cox said the school was probably named after a local resident, because a cemetery close by has a few Campsters buried there.

The stone used for the school's walls was purchased in Perryville, Cox said.

"It's a well-built building," she said. "When they put in the alarm system, they had to drill through 17 inches of concrete."

Much of the original materials still are in the school. The tiled floors and the chalk boards found on three of the four walls in each of the two rooms were the same ones students who attended the last day of classes saw in 1965, over 30 years ago. Some of the furniture used at the school also was left behind in the building.

"That book case was from the school," Cox said of the case now containing antiques. "There's another one downstairs that I haven't brought up yet."

In addition to the building maintaining its 1940s charm, stories of ghosts and hauntings also add to its appeal.

"I've heard some stories and the rumors," she said. "I don't really believe them though."

Cox installed an elaborate alarm system, and other than that installation, very few renovations have taken place at the school. She said the inside of the building was painted, but the building remains in the condition it was after construction was completed in 1940.

Cox not only has pictures of the school built in 1940, but also the original Campster School built in 1858. That school was torn down in 1940 because the building was dilapidated.

But Cox said some area residents want to make sure this building lasts for many years to come.

"The people in the area really take pride in this school," she said.

She said a group that used to be called the Campster Welfare Ladies met Wednesday at the school. "I think they've dropped the `welfare' since I bought the building," she said. "They kind of took care of things around here."