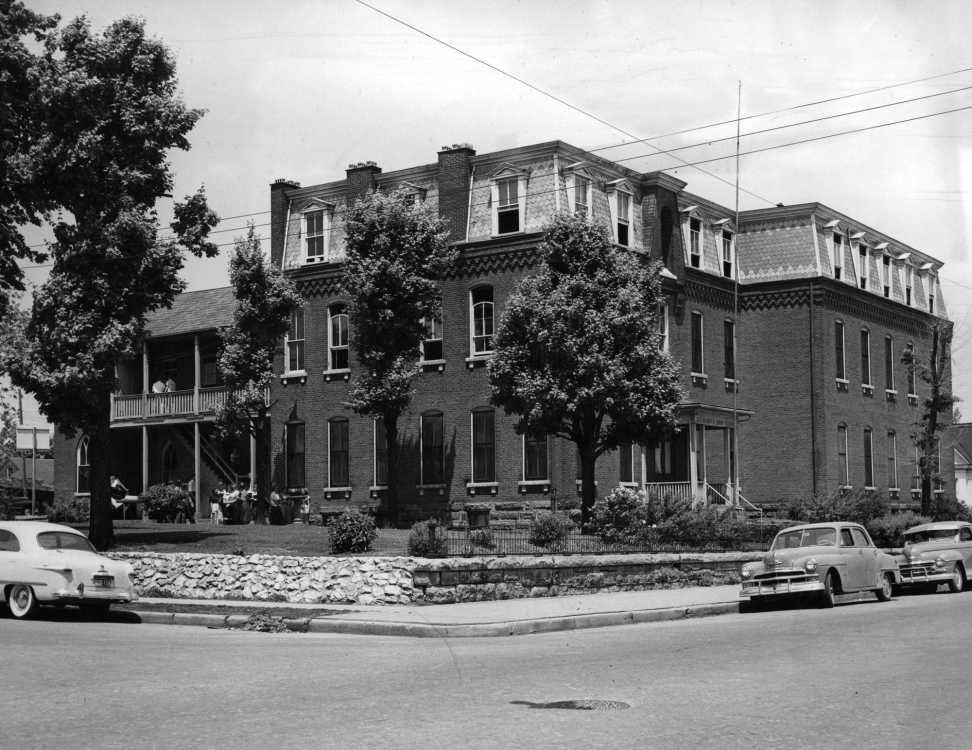 1879: A small, brick structure was built at the northwest corner of Sprigg and William streets to house Saint Francis Hospital. Three Franciscan Sisters had come to Cape Girardeau in 1875 at the invitation of the Rev. Joseph Schmidt, pastor of St. Mary's Catholic Church, to teach at the parish's grade school. The sisters established the hospital here.

1882: A west wing was constructed on the hospital on a lot donated by Jack Painter.

1914: A new Saint Francis Hospital was built at Good Hope and Pacific streets.

February 1919: D.E. Lighthall, an "Indian medicine man," and Dr. J.C. Vorbeck, a well-known Cape Girardeau physician and surgeon, opened a sanitarium in the old hospital building. Lighthall Indian Sanitarium, according to an advertisement April 26, 1919, combined "Indian medication with the latest scientific methods for the treatment of chronic diseases of men, women and children."

September 1, 1919: Dr. J.C. Vorbeck took complete charge of the sanitarium, D.E. Lighthall having sold his interest in the hospital. The latter remained in the employ of the sanitarium as a field agent. The name was changed to Vorbeck's Sanitarium.

Feb. 1 1921: Dr. J.C. Vorbeck closed his hospital in the old Saint Francis Hospital building and moved his offices to the H.-H. Building on Broadway. Vorbeck hadn't accepted any "house patients" at the hospital for about a year. In August 1921, Vorbeck left Cape Girardeau for St. Louis.

May 8, 1925: Through action of the board of trustees of St. Mary's Catholic Church, the old Saint Francis Hospital building was purchased by the church at a cost of $21,000 from Tony and Joseph Haas. The three-story brick building had about 35 rooms. The parish intended to use the old structure for only a few years. It was planned to then tear it down and build a modern school on the same site.

Sept. 1, 1925: St. Mary's High School opened, after renovations, with one teacher and 14 students. Only freshman classes were taught.

June 21, 1953: Groundbreaking ceremonies were held for a new Catholic high school on a 15-acre site on Caruthers Avenue, north of Broadway.

April 1956: The old St. Mary's High School structure at Sprigg and William was razed. The property had been purchased by E.M. McDowell of Evansville, Ind., a former Girardean. Once the lot was cleared and graded to street level, McDowell planned to develop it for unnamed commercial purposes.