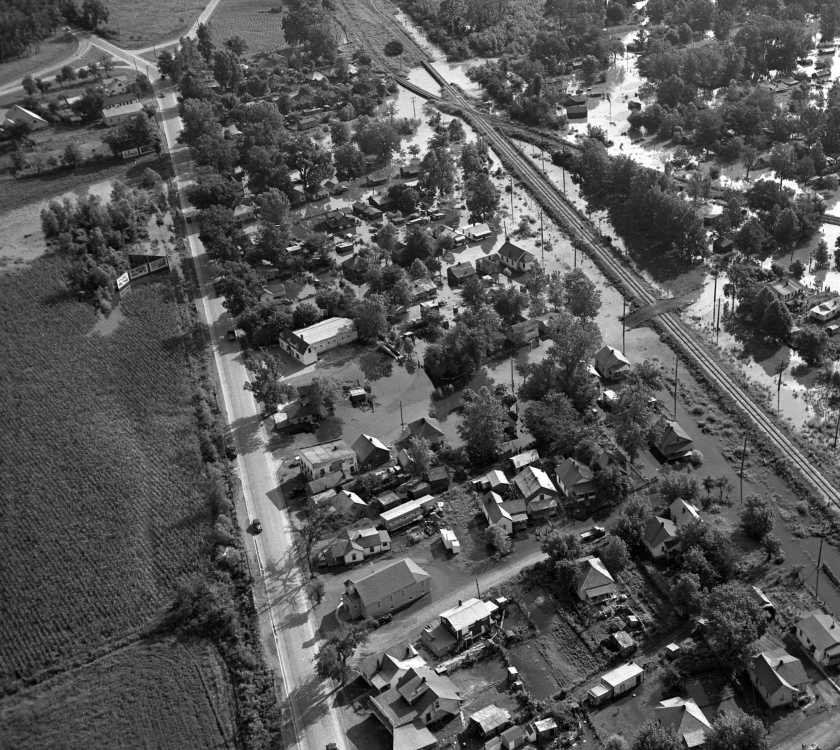 The 1950 census prompted a story about the south suburban area of Cape Girardeau. This aerial view is looking north with the former Highway 74 (now Southern Expressway) at the top left corner, intersecting South Sprigg Street, at left. (G.D. Fronabarger photo)

For years we have called it Smelterville! Anything below the foot of the old toll gate hill as it was once known or in more modern words on the other side of the intersection of new Highway 74, it was all the same in name to the people uptown.

When the river came up and the people "across the track" were forced to move, we said they "fled from Smelterville." When the water receded and they started moving back--as they always do--they were returning to Smelterville, we said.

Some things were said about this across the track section that were not exactly complimentary; some reference was made to the shacks filled with the river's dirty mud; to the one source of water; to how some of the people lived. Always it was Smelterville that was referred to and it wasn't Smelterville at all.

Only a Small Part

You see Smelterville actually is only a small part of the section of town that starts at Boundary street, is hemmed in on the east by the Mississippi River and on the west by Sprigg street and is bounded on the south by Cape La Croix Creek.

Smelterville is a small rectangular section lying between Sprigg street and the Frisco railroad tracks, starting at La Cruz street (the John Dietiker store and Hartle Trucking Co. corner) on the north and running to Cape La Croix Creek. That is all of it. It does not include any territory "across the tracks" and in all respects is just a small compact settlement of some nice buildings. Altogether there are 53 owners of property in Smelterville, taxpayers if you please.

Smelterville is a section of home owners, of home business and of home churches.

But what of the rest of the section we call Smelterville?

There are two other distinct parts of the area. One is the Village of Girardeau and the other is Leadville.

The larger and the one at parts of which the finger is pointed more often is the Village of Girardeau. It embraces all territory east of Sprigg street and on both sides of the Frisco tracks from Boundary street to La Cruz street where Smelterville begins. It runs from Sprigg street to the river. It is the section across the tracks where the river comes in most often. It is the section that provokes the talk about better housing, although it has some nice houses. It is the district in which there is no sewer system, therefore outside sanitary facilities are the rule, not the exception.

The Village of Girardeau has only one owner, the tax records show, the Aquamsi Land Co., the Houck interests.

It might be said that in the Village of Girardeau everyone owns his own home, but no one of them owns the land on which the dwelling is located. The people say they get a long term lease for the payment of a nominal fee, $5 for example, and all they have to do ever afterwards is to pay the taxes on the property. The company representative collects that each year, they say.

Smelterville has a property assessment of $20,860, while total assessment in Leadville is $3020.

There are four churches in the suburban area, five counting Hely's Chapel atop the bluff on the stone company property. Others are Southside Baptist, Pentecostal Assembly, Holy Family Catholic and New Bethel Baptist (colored).

Nine stores serve the area, some of them in each territory, the largest in Smelterville.

Houses in the Village of Girardeau extend all the way to the river and peculiarly enough seem to follow the small creek that skirts through that section at the foot of the old toll gate hill. It is in the section near the river that the water supply is confined to one community hydrant. The city put that in several years ago after the pipe was run from the closest water main.

White children from the area attend May Greene School; the Negro children go to the Cobb School, being transported by bus, or Holy Family School.

It is difficult to determine how many people live in the three suburbs, although they have been counted before and were counted again this spring. The population is somewhat shifting.

One man familiar with the situation placed the number at around 700, almost equally divided among Whites and Negroes. One estimate count listed 165 families.

Some of the Negroes in bygone years worked at the Hely rock crusher in the days when stone was crushed by hand hammer, the number at one time being as high as 70. Now only about four work at the plant, the Federal Materials, with the crushing being done by machinery.

The stone company at the beginning erected several houses for its employes, these being located on its own property south of Smelterville, and these are still being maintained, with employes paying a rental of $6 a month, the same as at the beginning. A church the late Edward Hely erected for his employes on a high hill still is maintained for them.