Round Barn with Tree House 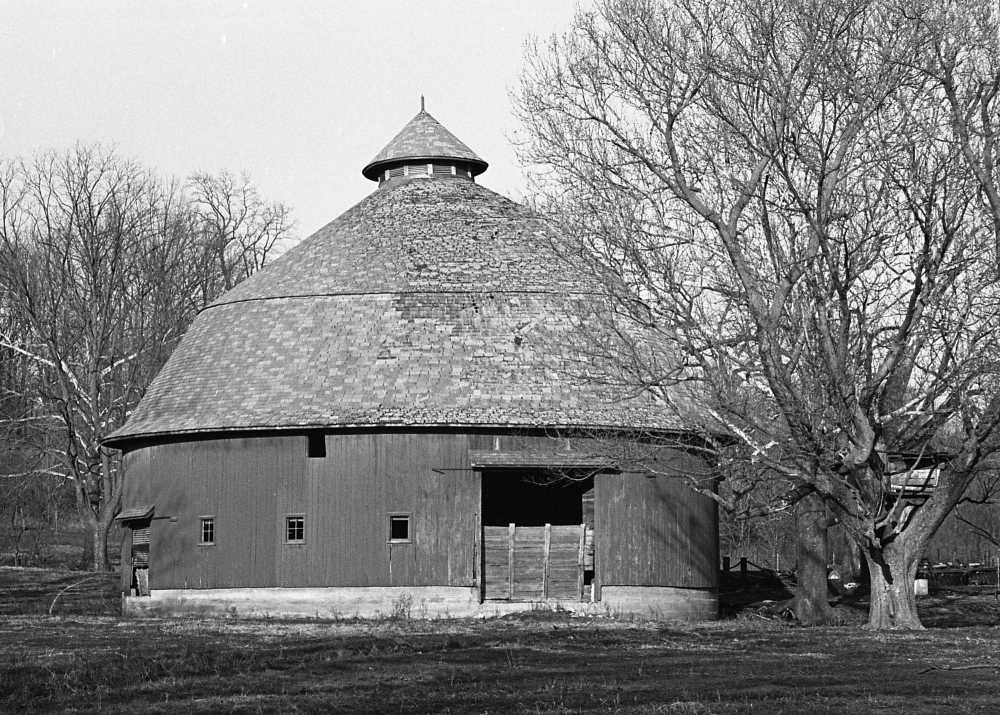 The round barn on South Sprigg Street has made the rounds elsewhere, but this photographer shot it with a nearby tree house in the late 1970s. The barn was razed about 1982.

Ray Owen wrote about the barn in this story published in the Southeast Missourian on April 11, 2002:

No corners for goblins

No one is quite certain where the idea of the round barn originated. Some say the round structures were created to keep the devil from hiding in the corner. Old-timers say the advantage of a round barn was that goblins and spooks couldn't hide in the corners.

Other benefits of round barns include the inexpensive construction cost because of the use of less lumber and better insulation against the elements. Round barns have always been a rarity, but they did flourish during the late 1800s. Round barns could be found everywhere, even in Cape Girardeau, where two of the architectural gems were built almost side-by-side.

They were thought to be built around 1919 on adjoining farms along South Sprigg Street. One of the barns was destroyed by fire in 1929. At the time it was owned by Giboney Houck. The second round barn, which was razed about 1982, was originally on the Anna Kay Farm, which later became the Campbell Farm. The latter barn, built on a concrete base, included a silo in the middle of the barn where food was dispensed to livestock inside the barn.

The barn, red in color, was featured in a recent "Faces & Places" of the Southeast Missourian. "I can't understand why the old red round barn on South Sprigg was razed," says Tom Giles of Cape Girardeau. "To this day, I smile when I pass the former site of the barn as I am reminded of the time-worn joke we told all the kids." The joke concerned a farmer's horse, or maybe it was the farmer, who went crazy in the barn, looking for a corner.

"The old red barn was a piece of craftsmanship, from the inside out," said Jeannie Troy, who had an opportunity to see the inside of the structure. "There were few, if any, like it in the area," said Troy. "It must have been quite a source of pride for the owner. There was a circular rail suspended from the roof that allowed farmers to convey hay bales or any heavy object all around the barn. I recall hearing my father relate an old joke about the barn. It involved a hired hand who went crazy trying to find a corner."

John Freeze of Cape Girardeau remembers the old barn. "My dad may have helped build it," said Freeze. "We could never find out who the builders were."

Round barns are a novelty, and not many remain today. One architect said that to achieve its circular shape, the wood siding had to be cut green and bent in large presses. Most of the round barns were built of wood, but a few were constructed of brick. The roof was usually the first to deteriorate. The roof of the barn here was filled with holes and decay.

The lower part of the round barn was used to house the livestock -- horses, cattle, hogs -- said Taylor and Burger. Circular barns ranging from 60 to 90 feet in diameter were practical; they could accommodate as many as 100 dairy cows with space to spare. In fact, cows were one of the driving factors behind the origin of the round-barn, according to some sources.

In the book "Stories from the Round Barn" by Jackie Dougan Jackson, it says that "an aerial view of a cow shows it to be wedge-shaped and therefore arranging these wedges around a circle represents the most efficient use of space." Other benefits of round barns included the inexpensive construction cost because of the use of less lumber and better insulation against the elements.

Round barns have always been a rarity. According to Jackson's book, reasons for this are unclear, but may include the slow development of the self-supporting ceiling and the difficulty in enlarging the structure for expanded use. There are only 153 round barns listed on the National Register of Historic Places, but there are many barns, not on the registry. Meanwhile, the round barn continues to be an appealing landmark for artists, photographers, history buffs and curiosity seekers.