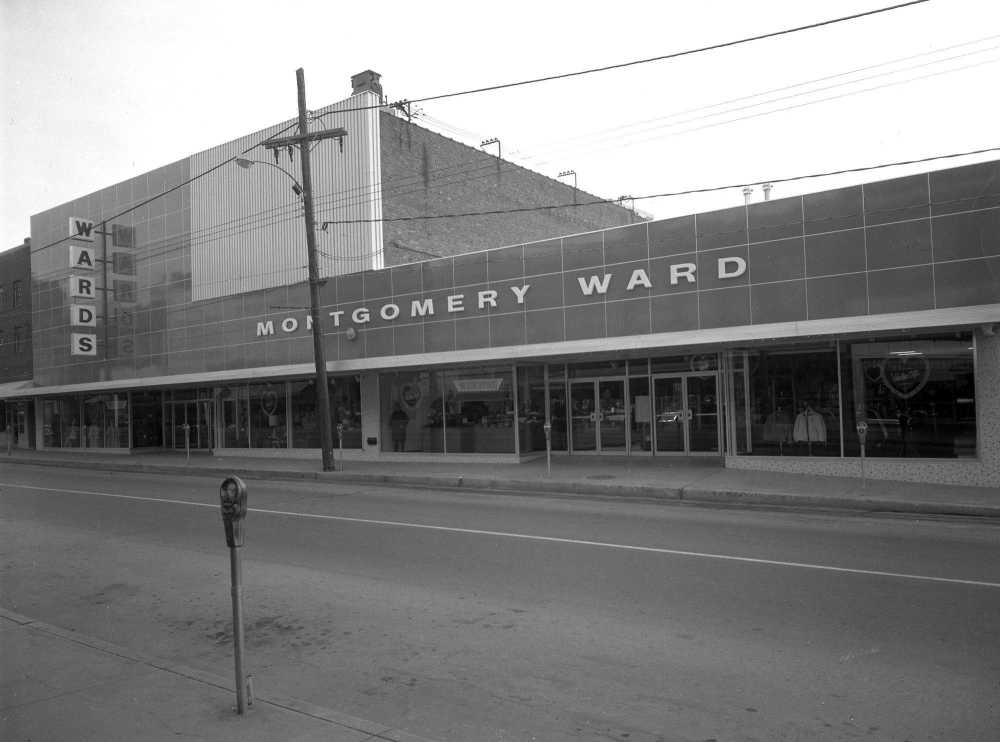 Our Third Big Store Opening During 35 Years in Cape!

It was a great day in Cape when Wards opened their first store here on December 29, 1928. Wards and Cape have been growing steadily ever since! First at 430 Broadway, then at 18-24 North Main, now in a greatly enlarged and completely remodeled store, Wards remains the store with more for Cape Girardeau.

Expanded lines of merchandise in all departments

Montgomery Ward moved from Broadway to Main Street in 1933.

From "Out of the Past"

March 19, 1928 Montgomery Ward & Co. will locate one of its retail stores in Cape Girardeau, providing survey now in progress proves satisfactory and suitable site is obtained; store will need approximately 15,000 feet of floor space, this being equal to building 60 feet in width and 165 feet in depth, with two floors and full basement, with additional 5,000 feet in reserve.

Sept. 6, 1928 Excavation of site for Montgomery Ward & Co. store on Broadway is attracting unusual amount of interest among older residents; work is revealing old grain tunnel which once connected Stein Bros. flour mill with company's elevator; mill once stood on site and represented one of most prominent industries of the day.

Dec. 3, 1928 New retail store of Montgomery Ward and Co. will open on Broadway about Dec. 28; new store, which is nearing completion, will be eighth such outlet placed by company in Missouri.

Nov. 5, 1932 Montgomery Ward & Co. has signed a lease for a site on the east side of North Main Street, just north of Independence Street, upon which a new department store building will be erected; work on the new, $50,000 building will begin as soon as the site is cleared.

Dec. 1, 1932 Razing of two brick buildings on the east side of Main Street just north of Independence Street to make room for the new Montgomery Ward & Co. department store has started; L.A. Mudd has charge of tearing down the buildings.

Feb. 1, 1933 With a contract signed for construction of a modern store building which Maj. Giboney Houck will build for the Montgomery Ward & Co., on Main Street, preliminary work is started by the contractor, A.H. Gerhardt; the building will extend the entire 134 feet between Main and Water streets.

May 18, 1933 The crest of the Mississippi River flood is expected at Cape Girardeau sometime tomorrow; backwater is collecting at Water and Independence streets and also is several inches deep in the excavation made for the new Montgomery Ward Co. building on Main Street.

Nov. 25, 1934 An annex to the local store operated by Montgomery Ward & Co. will be opened Tuesday at 118 Independence St., where a low-price line of furniture will be carried.

May 13, 1944 Without changing its rate of fall, Mississippi River is at stage of 37.4 feet at Cape Girardeau; much of water is off South Main Street between Independence and William, and top of Frisco seawall on Water Street is visible; traffic is routed over Main-Independence intersection for first time in two weeks; downtown businesses are getting back to pre-flood conditions; floor is being relaid at Montgomery Ward & Co. store, and concrete floor will replace wood floor at J.C. Penny Co. Store; floor will be replaced in F.W. Woolworth & Co. Store next week.

July 12, 1947 Street department crews are busy again today following the falling Mississippi River back to its banks by hosing away muck left by its retreat to 38.7 feet in morning, fall of practically a foot in 24-hour period; job is under way at all intersections where accelerated rate of fall left as much as a foot of ill-smelling muck in it wake; meanwhile, merchants, borrowing firehose from fire department, or using garden hose, are busy cleaning their establishments preparatory to reopening; at Montgomery Ward store, considerable damage was done to floor, where top maple surface buckled in huge waves, one almost as tall as a man; yesterday crew began tearing floor away, exposing undamaged subfloor on which new flooring will be placed.

Jan. 5, 1962 A half-million-dollar expansion program under which the Montgomery Ward store on Main Street will be enlarged by about 14,000 square feet to incorporate the existing Bahn Hardware building and another to the southeast is announced; the move follows acquisition of the Bahn building yesterday by Dr. A.G. Juden of Cape Girardeau, Mary Frissell Evans of Cape Girardeau and Eldon, Mo., and Sally Juden Reed of St. Joseph, Mo.

April 1, 1981 Montgomery Ward, which has operated a retail store at its present location at Main and Independence streets since 1933, will close the store on Dec. 24 of this year; the store employs about 40 full and part-time people.

This previous blog has a photograph showing the Montgomery Ward building at 430 Broadway in 1929.