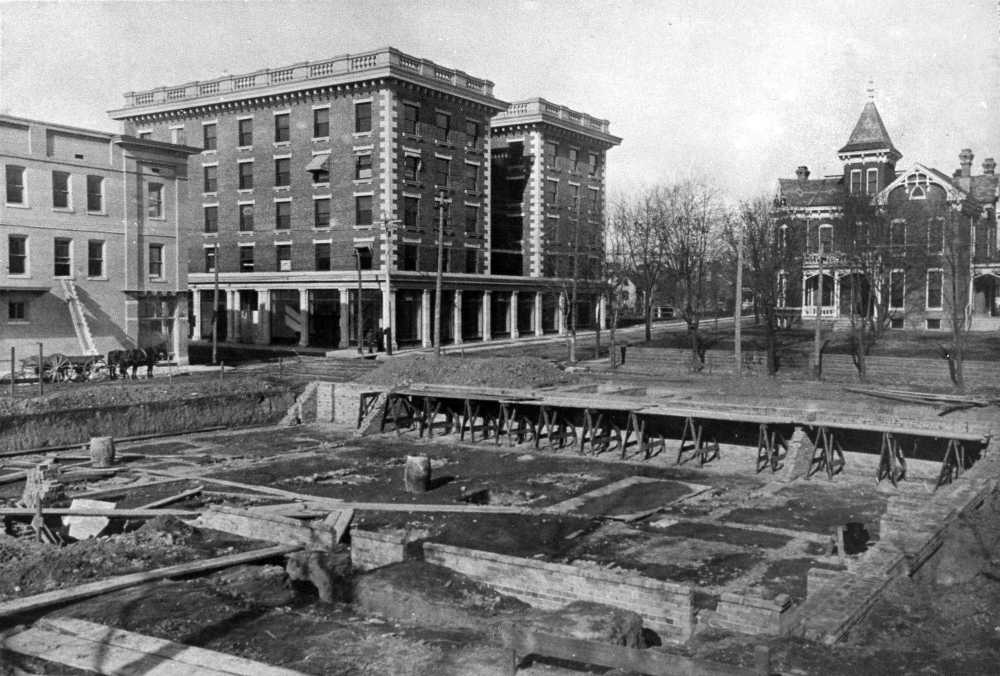 This picture shows the beginning of construction of the Federal Building at the southeast corner of Broadway and Fountain street, circa 1908-09.

A horse-drawn wagon can be seen on Fountain street next to the Idan-Ha Hotel, at left.

The Himmelberger-Harrison building is in the center.

The Robert Wilson house is on the right.

In the mid-1870s Robert Wilson had the two and one-half story brick Queen Anne style house, with Eastlake influences, built at 338 Broadway in Cape Girardeau. The Eastlake style is characterized by the large, curved brackets in the cornice line, gable ornamentation, a profusion of spindles and stylized elements along porch eaves, combined with the lighter elements to exaggerate a three-dimensional façade. The house featured multiple porches, chimneys and a polychromatic roof. Wilson was born in Caldwell County, Ky., and attended Cumberland College in Princeton, Ky., and Lebanon Law School in Lebanon, Tenn. He moved to Cape Girardeau and signed on for the role of attorney in Circuit Court in 1868. He was elected to the Missouri Legislature in 1872. Wilson was appointed as judge of the Common Pleas Court by the governor in 1883 and served until 1888. He died in 1914 at the age of 75, leaving the house to his wife, Jeannie, who continued to live in the house until it was razed in 1927 to make way for the Marquette Hotel.

Here is a previous blog with a photograph from 1958 of the original Federal Building at this location.