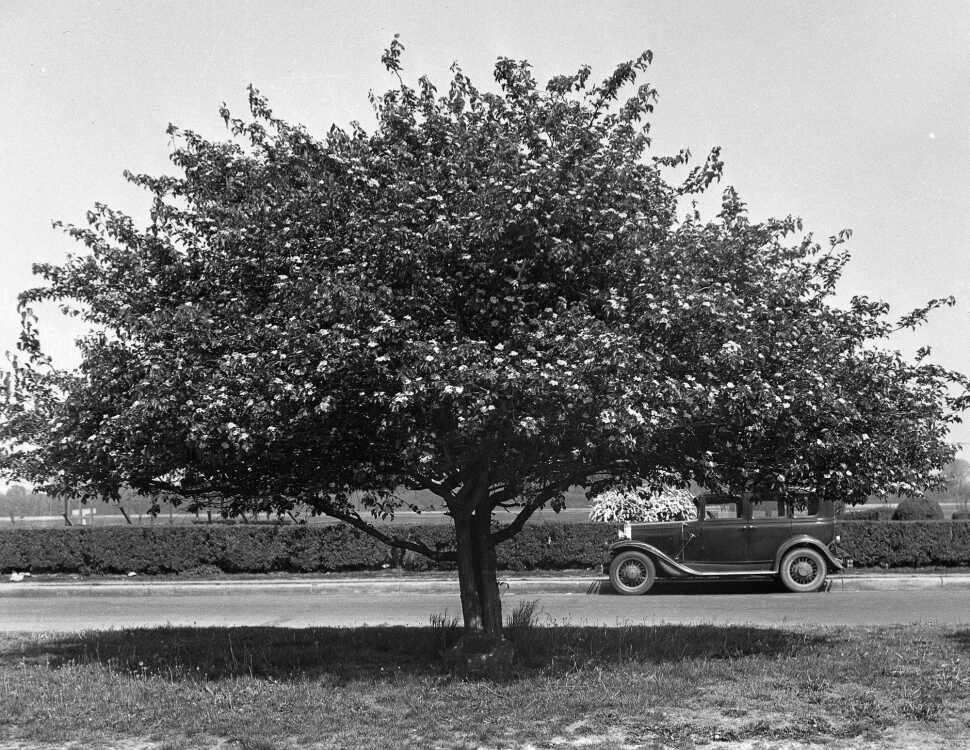 This hawthorn tree was planted in Murtaugh Park, the narrow parkway on Main Street at the Merriwether street intersection in Cape Girardeau. The picture was taken before the tree reached its greatest proportions. (G.D. Fronabarger photo)

The Amy Kimmel hawthorn was planted on Arbor Day, April 11, 1923, by the Wednesday Club in honor of the late Miss Kimmel, who was instrumental in founding the club which now is more than 50 years old. For many years it has been one of the show trees of the community. Now, butchered and distorted out of shape, its ultimate future is in doubt.

At the time of the ceremony an inscribed stone was placed beneath the tree. That marker was moved to the State College campus, according to a story Oct. 16, 1956.

Former and present members of the Wednesday Club, noting that the Main street parkway in which it was located for 33 years, was to be completely torn up and surfaced, arranged to have the stone marker moved to a parkway east of the Divide between Academic Hall and Kent Library at the college. College officials suggested this location.

The marker was placed on the parkway April 11, 1923, on the occasion of the planting of a hawthorn tree in memory of Miss Amy Kimmel, founder of the Wednesday Club. During sewer construction work this summer, the tree was ruined and subsequently destroyed. The marker was moved after the city decided to grade and surface the parkway, which for many years in the past was planted in shrubs and flowers.

The Wednesday Club observed Arbor Day by planting a Hawthorn tree in honor of Miss Amy Kimmel, the founder of the Cape Girardeau club and still an active member of it. Mrs. George L. Meyer, president, presided and the double quartet from Central High sang two appropriate selections.

Instead of planting a tree merely to represent the Wednesday Club, it was decided to make it in honor of the woman who, in 1892, called a meeting of women to form an organization to work unitedly for the betterment of Cape Girardeau.

Miss Kimmel was prevailed upon to say a word. She said she had been visiting relatives in Texas and had attended several meetings of women's clubs. She saw the good they were doing and upon her return home she talked to some of her friends about it. A few months later a number of women were invited to a meeting and to her surprise 20 attended. She had hoped to interest at least 10. The Wednesday Club was then organized with the late Mrs. Josephine McGee president. Miss Kimmel noticed in the audience Mrs. Otto Kohtitzky, Mrs. Himmelberger and Mrs. W.H. Harvey, who were charter members and who had served as president.

Mrs. Pink Caruthers, the recently elected president, read a poem on Arbor Day and Mrs. Himmelberger spoke of the early days in the organization.

A fine Hawthorn tree was planted in the parkway facing the Frisco depot, near the Independence street end. After the singing of America the audience was dismissed. 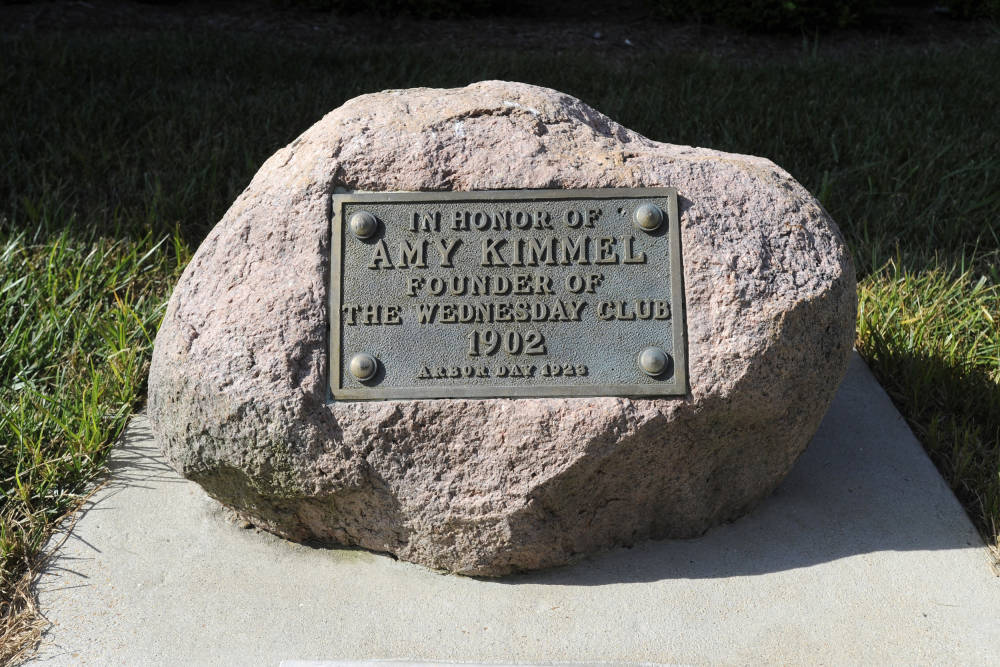 The stone marker is presently located in front of the Cape Girardeau Public Library, seen here in July, 2018.