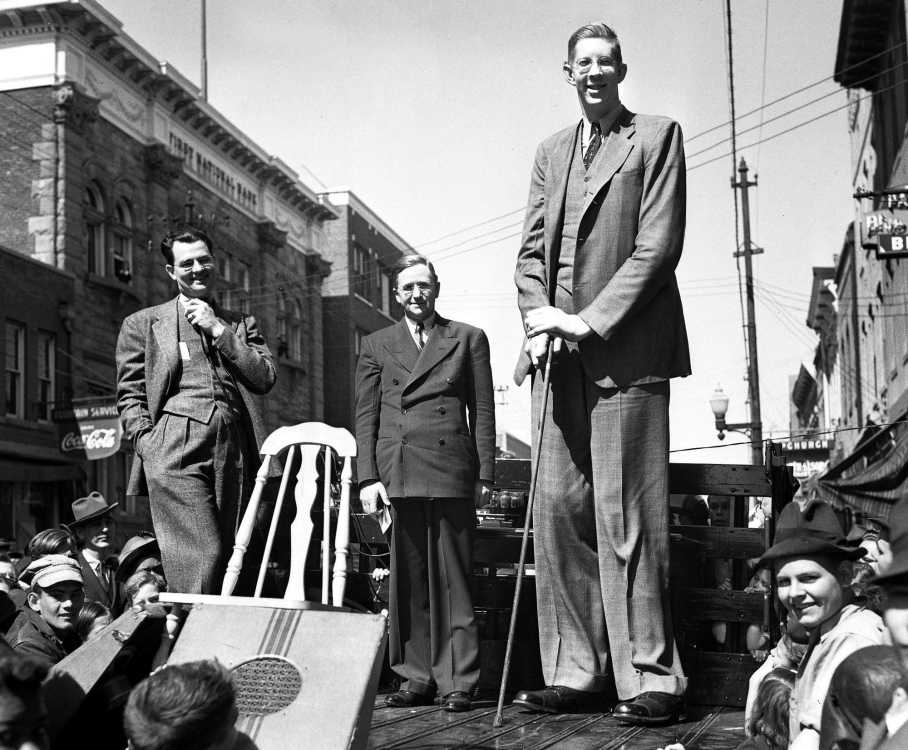 Robert Wadlow, the world's tallest man, didn't need any identification Tuesday afternoon when he stretched an 8 feet 8 1/4 inches of welcome to a clamoring Main street crowd in downtown Cape Girardeau. Diminutive in comparison his father, Harold Wadlow, poses at his left while Robert beams agreeably from the top of a motor truck upon the hundreds who jammed the street and blocked traffic. Wadlow appeared here as the guest of the Gaylor Shoe Store, 104 North Main street. (G.D. Fronabarger photo)

Robert Wadlow, 22 years old, whose 8 feet 9 1/2 inches made him the tallest person in American medical history and perhaps in the world, died today of complications following a foot infection.

An infection in his left ankle started the trouble. Physicians resorted to a blood transfusion and a minor operation on the foot, but the 491-pound giant failed to respond.

Until young Wadlow began traveling for a shoe company, with his father, Harold F. Wadlow, as manager, his daily life was like that of any other boy his age.

He took part in boyhood games, he ran a soda pop stand in his front yard, he swam, he liked ice cream.

In his studies he was above average. After graduation from the Alton, Ill. High School, he attended Shurtleff College.

Robert Wadlow, Alton giant who died of a foot infection, had been in Cape Girardeau on a number of occasions, when those who met him found him a shy, likeable young man. His last visit here was in March, 1939.

At age 18, Robert Wadlow wore size 37 shoes that cost $100 a pair. Two years later his shoes were provided free by the International Shoe Company which operated a factory in Cape Girardeau. It manufactured many of his shoes, six pairs, twice a year. When he turned 20, Robert traveled for the shoe company, visiting over 800 towns and 41 states.

Wadlow visited Cape Girardeau on April 8, 1933. He rode in a parade on Broadway celebrating International Day.

Newspaper accounts said he was "a mere boy of 7 feet 3 inches." He visited again in 1936 as a guest of the Gately store at 313 Broadway.

In Cape Girardeau, when he slept at the Hotel Marquette, he had to sleep on two full-size beds because one bed was only large enough for him to sit on.