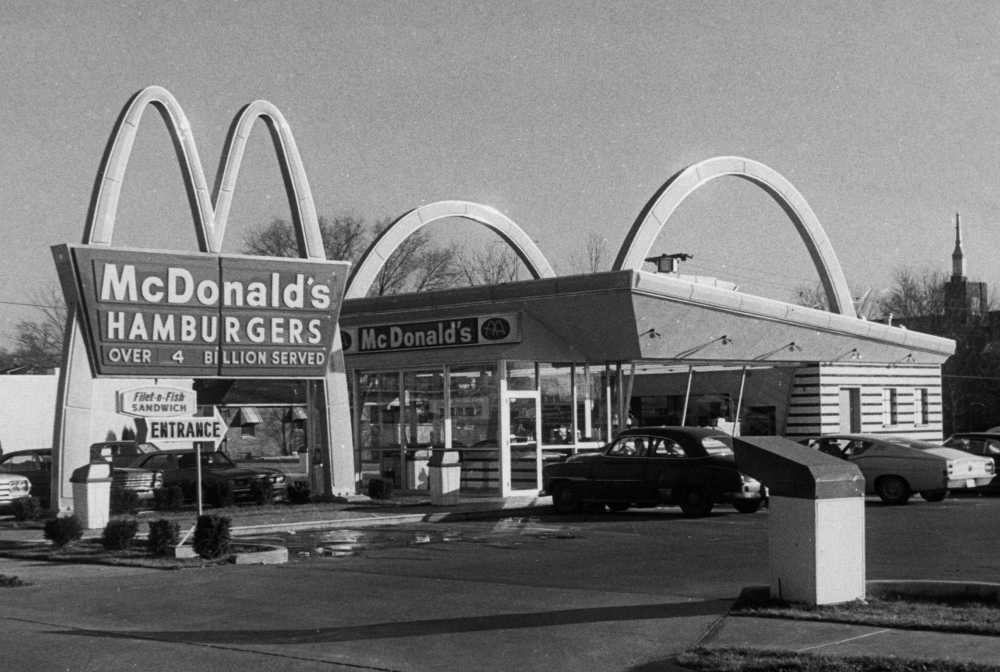 McDonald's Drive-In at 1925 Broadway proudly displayed its golden arches in this 1969 picture. Construction began in early 1968, and the restaurant was ready to open in mid-July of that year. (Southeast Missourian photo)

When Jerry Davis opened McDonald's Restaurant at 1925 Broadway 33 years ago, he was barely open an hour when the lights went out and the restaurant was closed for a day because of an electrical problem.

A new, "old-style" McDonald's opened at the same location Thursday morning, and Davis' son, Shannon Davis, was there for the occasion.

At 8:45 a.m., the power went out when a nearby power transformer blew. "It was so ironic, so unbelievable," said the younger Davis. This time the restaurant was closed for only about an hour.

More than 600 people got a look at the restaurant Wednesday night during a special pre-opening of the "Anniversary McDonald's Restaurant," one of fewer than a dozen of the specially designed restaurants in the United States.

It is Jerry Davis' ninth McDonald's. The president of Rich House Inc. owns and operates two other McDonald's in Cape Girardeau: in Westfield Shoppingtown West Park and at 3419 William. Others are two in Sikeston, one each in Charleston, Portageville and Jackson, and one to open soon in Marble Hill.

"The early reception of the restaurant Thursday morning was great," said Shannon Davis. "We opened about 6 a.m., and people starting coming by either at the drive-through or inside."

Cars were backed up onto Broadway at some points on the first day, which featured the fanfare of a giant Ronald McDonald blow-up figure on the roof, fireworks and food bargains.

The 1968 McDonald's was modernized in the mid-1970s. But the Davises decided on the "Anniversary" look, featuring the same vibrant red and white colors of the 1960s McDonald's, when they decided to build the new restaurant.

"It has the 1960s look," agreed businessman Max Stovall, a breakfast customer.