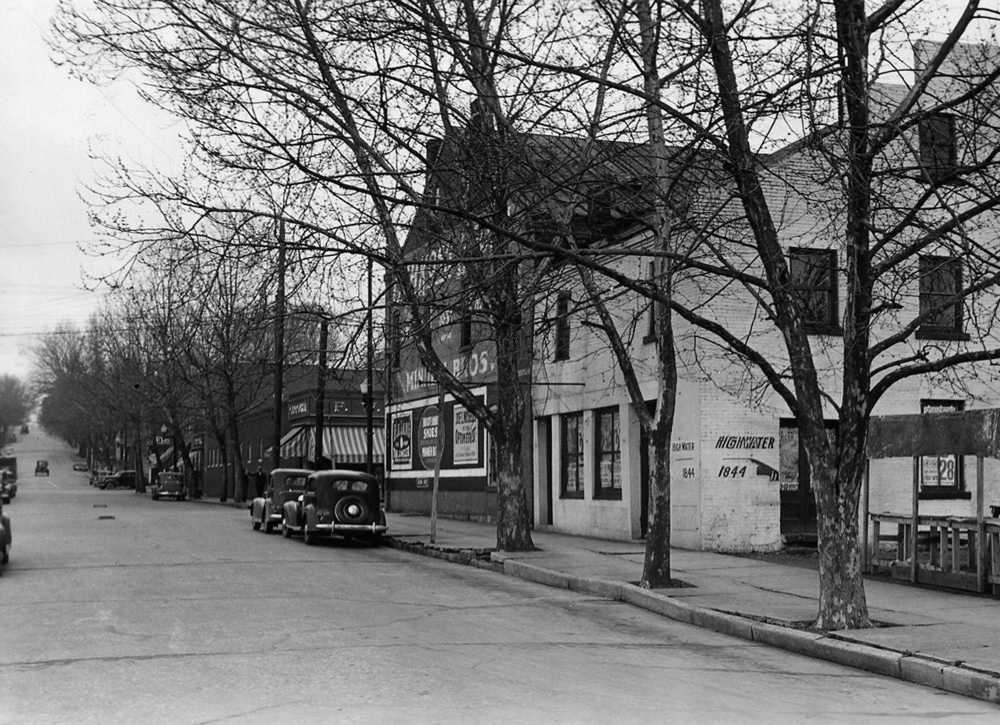 This picture shows the mark on a building at the Independence-Water street intersection indicating the height to which the Mississippi River went in 1844 on its highest recorded rampage, the stream reaching a stage of 42.19 feet. (G.D. Fronabarger photo)

(Editor's Note: The view is to the west on Independence. The Woolworth's store with a striped awning is on the corner of Main and Independence. Without the modern floodwall in place, the highest recorded flood of 48.49 feet on Aug. 8, 1993 would have reached more than six feet above this mark on the wall.)

River Is Far From Record

Today the rising Mississippi River's flood water lapped against a building at the junction of Water and Independence streets on which it recorded the all-time, so-called modern high stage of the stream. The Mississippi in the year 1844 reached 42.19 feet, which was 2.15 feet above the great flood of 1927.

The flood mark, recorded in black letters on the corner of the building occupied by a cafe and in the rear of the Minnen Bros. store, is now, since the Mississippi is again on a rampage, an object of considerable interest.

Formerly there were two marks in Cape Girardeau to identify the 1844 flood. One of them was obliterated when the old Sturdivant Bank building at the northwest corner of the Main-Themis street intersection was remodeled in 1932. This mark was about 18 inches above the level of the street intersection and had been placed there at the suggestion of the late Col. Robert Sturdivant when he erected the building.

On the old Albert building, as the one at the Independence-Water street junction is known, the mark was established at the suggestion of the late Louis Houck. This mark is between 4 and 5 feet above the level of the sidewalk and shows where the big flood reached in 1844. It is said that a riverman placed a mark on the building during the flood, rowing there in a skiff and driving a nail in the wall of the structure, now nearly 100 years old. Later the nail was removed and the mark painted. It is kept freshly painted.

The Mississippi River flooding in 1951 came close to this river stage, shown in a photo taken one block north of Independence.