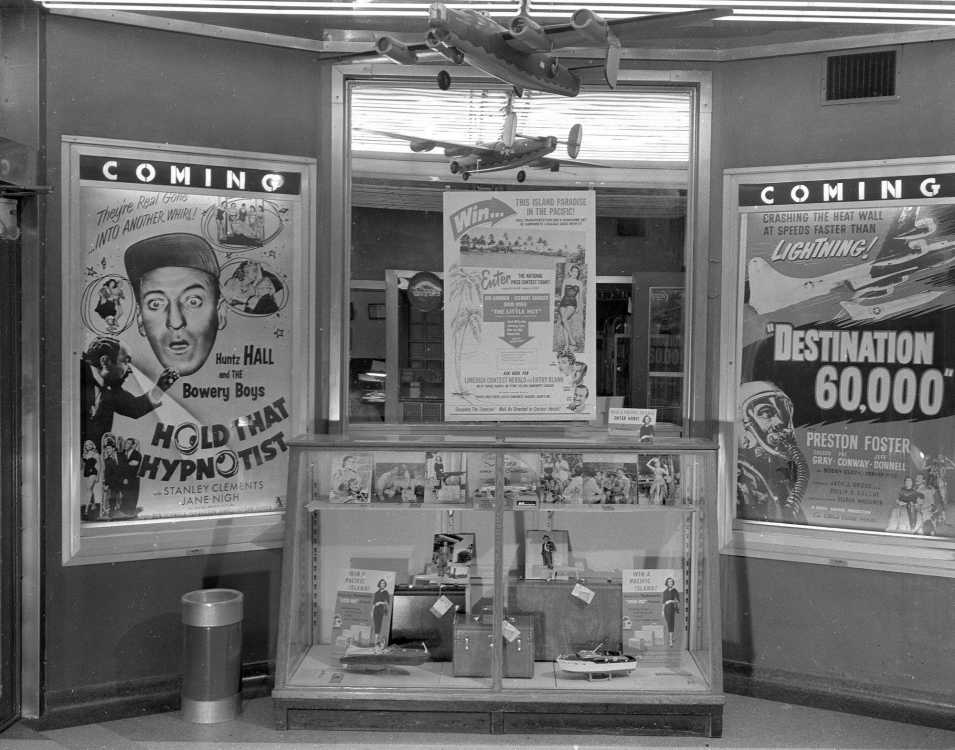 The foyer of the Esquire Theater in Cape Girardeau displayed movie posters in 1957. "Hold That Hypnotist" was a comedy with Huntz Hall and the Bowery Boys. "Destination 60,000" was a drama with Preston Foster. (G.D. Fronabarger photo)

Patrons could enter a limerick contest to win their own South Pacific island. The winner would also receive free transportation and a set of luggage. The contest was a promotion for the movie, "The Little Hut."

LONG BEACH, Calif. -- What would you do if you suddenly won a South Pacific island complete with furnished hut, outrigger canoe and a native man Friday?

Well, The Kent Shelbys, who won an island in a national limerick contest sponsored by a movie studio and travel agency, have this to say:

"We intend to bask in the sun and just fish and swim and read and let the rest of the world go by."

Shelby, 23, an aircraft worker, said yesterday that he, his wife and 15-month-old daughter plan to fly to the 4 1/2-acre island in the Fiji group about the first of the year.

"If it's as good as it sounds we may never come back," Shelby said.

At TCM.com, this item was included in a description of "The Little Hut":

As part of the promotion for the film, M-G-M created an international limerick contest, offering a small island in the Fiji Islands newly renamed Ava-Ava as a prize. The winner, Kent Shelby, moved to the island; however, according to a May 20, 1974 "People" interview, Shelby was forced to move off the uninhabited island after M-G-M removed the furnishings and the servant provided to him upon his arrival.