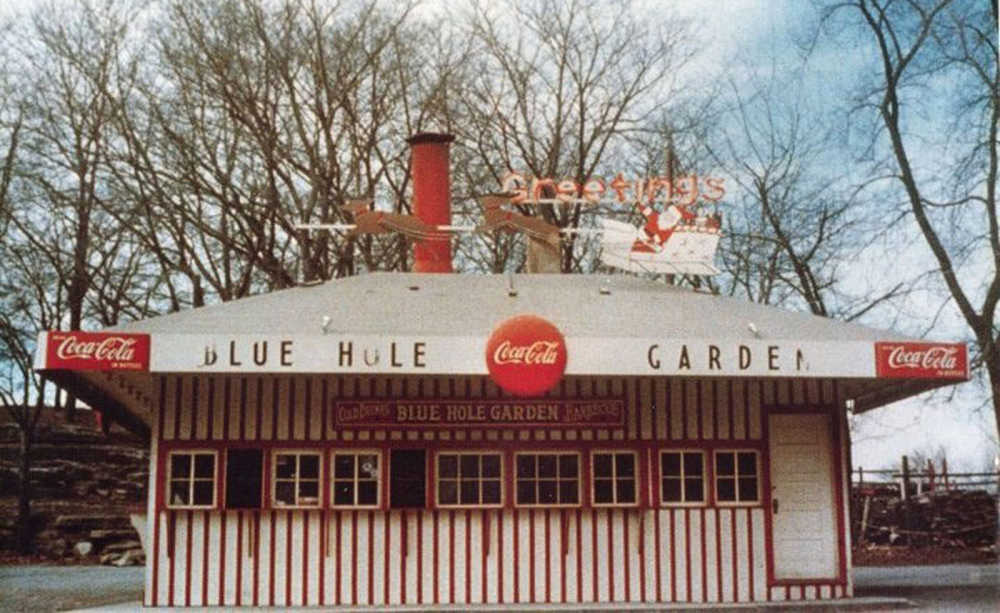 We have been asked about the old Blue Hole Garden which is pictured here on South Sprigg Street. This is not a Frony photo. We got it from Bill and Sue Roussel who edit a newsletter for the 1950s decade of Central High School alumni.

The name "Blue Hole Garden and Barbecue" was conceived at its original location. It was near the cement manufacturing plant and also near a deep abandoned quarry that resulted from the operations of the former Hely Stone Co. At that time, water stood in the deep "blue hole" quarry, and it was used for swimming, fishing and baptisms. The quarry was drained in 1928.

Another account by K.J.H. Cochran, published in the River City Review in 1976, details some of the early history of the business:

There were no roadside eating stands in the Cape area. William Franz, a cobbler on Good Hope street, could foresee the advantages in opening an eating place for travelers where they could drive in and be served quickly in their car.

He and partner Lonnie Hill built the eating stand on Highway 61 South, the southern approach to the city where a popular swimming spot called the Blue Hole was located.

The 20 x 18 foot frame building was painted white, striped in red with an inside kitchen and counter as well as outside service stools that were protected by a wide overhanging roof. Customers could be served at the counter or in their cars. Flowers were planted along the back fence and gave the eating place a garden atmosphere. A simple menu was featured.

Most customers came from the Bootheel on their way in to town for shopping, and few came from the city. Franz was disappointed in the receipts so he bought out Hill and decided to change the menu.

Franz had a barbecue pit placed behind the stand near the kitchen door, so the roasted meat could be brought into the serving area quickly and not lose its savor. Hickory wood was ordered from Ben Hunze and pork shoulders from Nenninger Packing Co. Years later, the hickory wood came from the Jackson Handle Factory.

Franz and his wife, Mary, perfected a barbecue sauce that remained a family secret. They found the way to success and people came to the roadside drive-in from everywhere.