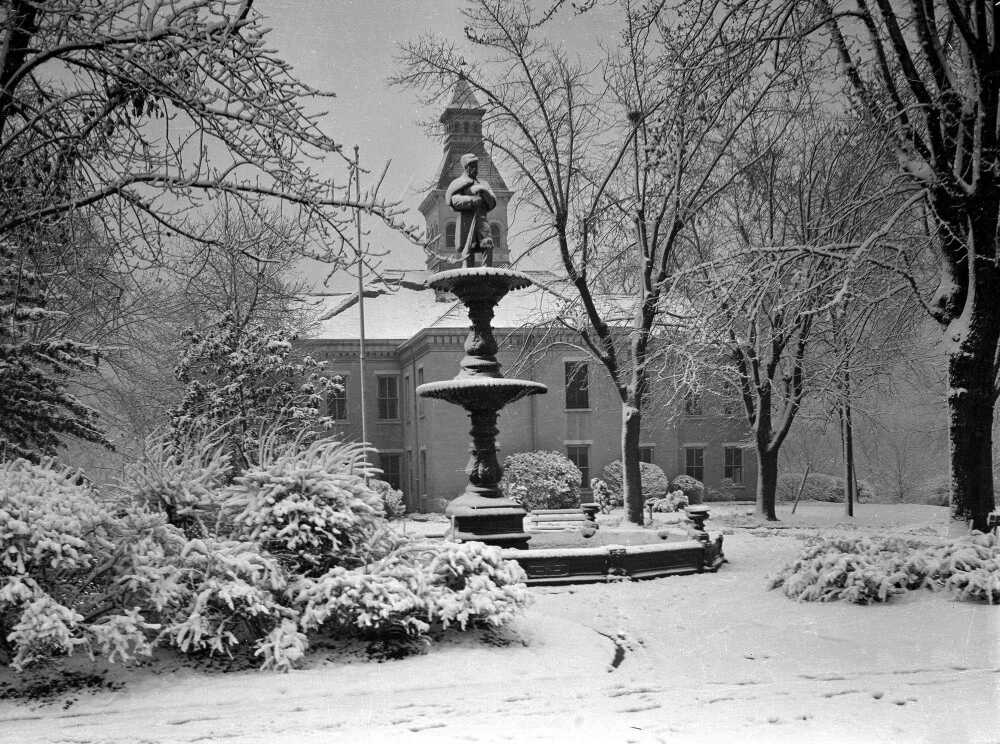 This photo made early today reveals the charm of winter's touch on the Cape Girardeau landscape. The view points eastward from Lorimier street into Courthouse Park. The snow-clad warrior is the bronze Civil War veteran who holds eternal vigil over the fountain west of Common Pleas Courthouse, shown in the background. (G.D. Fronabarger photo)

Cape Girardeau and district today was blanketed in the first local snow of the season--one of wintry charm. Two inches of snow fell Tuesday afternoon and today and forecasts indicated that the fall, interrupted early today, might be continued tonight. Temperatures remained slightly above the freezing point.

Slippery streets and highways accounted for a number of traffic accidents, all of them of a minor nature. Motor busses were late again during the night arriving in Cape Girardeau from the north and south as the snow belt was extended.

The snowfall began shortly after noon Tuesday following on the heels of a misty rain. Big flakes ushered in the storm and during the night it settled down to snow in a fine drizzle of tiny flakes. Motorists coming into Cape Girardeau from Poplar Bluff late in the afternoon reported that snowfall and rainfall alternated in scattered spots between here and the Butler County seat.

A white blanket of three to seven inches layover the entire state, and it still was snowing lightly this morning.

Temperatures remained well below freezing and it is expected to be somewhat colder tonight.

All highways in Missouri were reported open but "very hazardous," and there were scores of automobile accidents.

The original soldier atop the fountain was replaced in 2003.

Here is a photo gallery of the replacement.

Here is a story about the calamity.