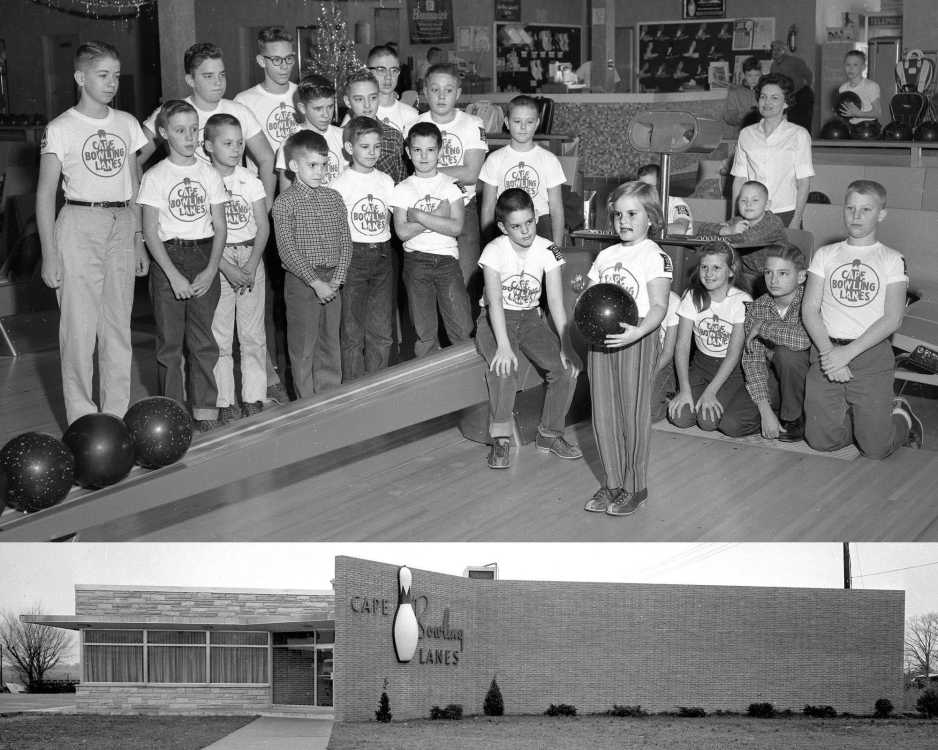 Construction of a building to house a new bowling alley on a lot on Minnesota street between William and Independence was started today. The building is being erected by Charles A. Hood, a contractor, who will lease it to Cape Bowling Lanes Inc., which will operate the alleys.

Grading started today for the building, which will be 75 feet by 155 feet in size. It will be of brick construction and will cost with air conditioning and heating from a central unit, between $80,000 and $100,000. A paved parking area also will be provided.

There will be 12 alleys equipped with automatic pin setters. Overall equipment will cost around $150,000. Plans are for an opening not later than Aug. 1.

Stockholders in Cape Bowling Lanes are Clyde Huff and Russell "Sonny" Young, who will manage the alleys, and E. L. Downs. Mr. Young is now associated with his father and brother in Ross Young & Sons. Mr. Huff is a contractor and Mr. Downs is an attorney.

The building will be immediately across the street from the Lowenbaum factory.

To Erect Only One Bowling Building

Local citizens interested in providing additional bowling facilities in Cape Girardeau have consolidated their plans and only one bowling alley building will be constructed, it was announced today.

The one to be erected, already under way, will be located on Minnesota across from the Lowenbaum factory. It will have 16 lanes rather than 12 as originally planned.

One proposed for Kingsway and Highway 61 will not be built.

The new alleys will be owned by Cape Bowling Lanes Inc., consisting of Russell R. Young, Clyde Huff, Edward L. Downs and the three Drury brothers, Bob, Jim and Charles. Huff and Young will operate the establishment. The building will be rented from the Drury brothers, who acquired the site from Charles Hood, the contractor now erecting it.

Interest of Jim Schumacher, who was associated with the Drury brothers in the proposed Kingsway building, has been purchased by them.

Besides the 16 Brunswick alleys with automatic pin setters, the building will have a nursery, snack bar, seating facilities for fans and air conditioning. Its location makes ample parking arrangements possible. An opening by July 15 is planned.

Aug. 6, 1983 Footings are being poured for new Cape Bowling Lanes on Silver Springs Road, facility which will initially incorporate 24 bowling lanes and have room for expansion later, adding up to 32 lanes.

Aug. 18, 1984 Construction of eight new lanes in West Park Bowling Center has been completed and they are now in use; addition provides total of 32 lanes in facility at Silver Springs and Bloomfield roads.

A more extensive history of bowling in Cape Girardeau can be found in this previous blog.