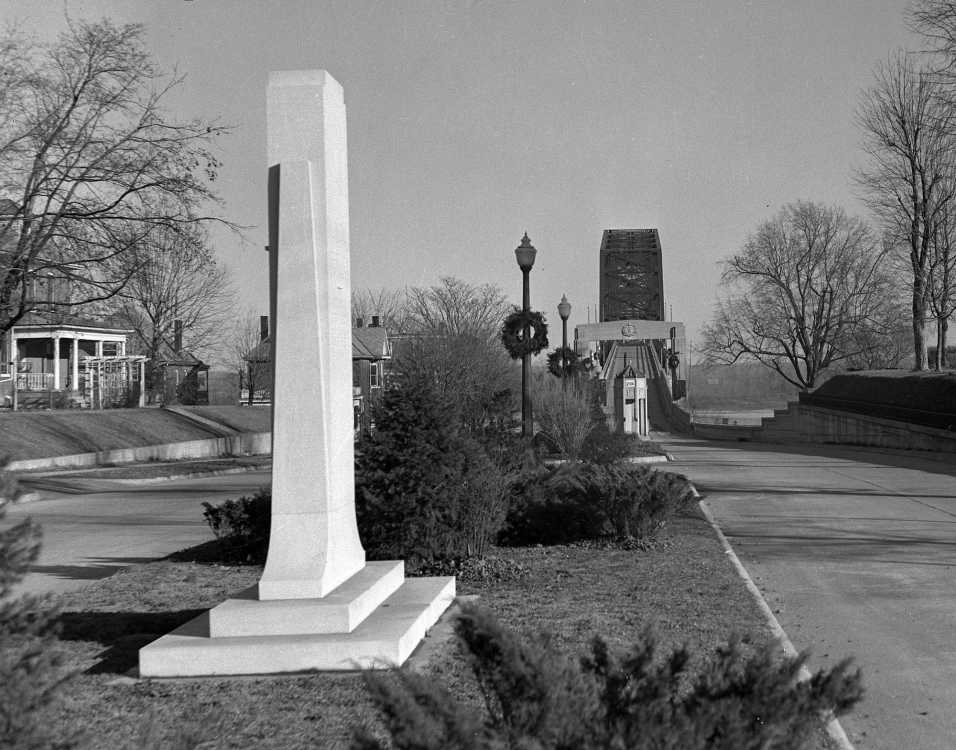 A monument to the Confederate war veterans of Southeast Missouri stands on the Morgan Oak Street plaza at the approach to the old traffic bridge in this undated photo by G.D. Fronabarger. The photo was likely taken before 1957, the year the traffic bridge toll booth was no longer needed. The monument which was placed there in 1931 by the United Daughters of the Confederacy was moved to Courthouse Park in 1995 by the Civil War Roundtable.

Memorial to Confederates to be Unveiled

The memory of Confederate veterans of Southeast Missouri will be honored Sunday when the United Daughters of the Confederacy unveil a monument on the Morgan Oak street plaza at 2:30 o'clock Sunday afternoon. Four granddaughters of Confederate veterans, including the great-granddaughter of Col. Wm. Jeffers, who commanded a Southeast Missouri regiment, will take part in the dedication.

The U.D.C. president, Mrs. Glenn C. Hope, for her chapter, has extended an invitation to the public to attend. Men from all the towns in Southeast Missouri are expected to be present and the chapter hopes for a good representation from Cape Girardeau.

The program will open with "America" by the Cape Girardeau Band, followed by invocation by Rev. J.J. McWilliams, president of St. Vincent's College. The principal speaker, Rice A. Pierce of Union City, Tenn., who has just completed a term as commander-in-chief of the United Confederate Veterans, will be introduced by Senator R.L. Dearmont.

His talk will be followed by "Dixie" played by the Cape GIrardeau Band, after which Senator Ralph Wammack of Bloomfield will deliver an address. Just as the Cape Girardeau Band concludes the playing of "The Star Spangled Banner," the monument will be unveiled and presented to the city. Mayhor E.L. Drum will respond in the name of the city. The program will be closed with a benediction pronounced by Dr. Marion Nelson Waldrip, pastor of Centenary Methodist Church.

Although the monolithic structure consists of only four pieces, its weight is approximately 12 1/2 tons. The tapering, skillfully chiseled marker, standing to a height of 14 1/2 feet, is fashioned from Georgia silver gray marble. Its appearance in the plaza has added much to the attractiveness of the traffic bridge approach.

The structure was erected on a base of three marble slabs, sizes of which are graduated toward the central upright structure. This latter structure tapers toward the peak in true monument fashion. On the front, or north, side of the monument appear the letters C.S.A., emblematic of the Confederate States of America, while beneath this and posed on a shelf is the Confederate flag, its background in tough texture and its stars and stripes embellished in polished marble. All of this figure is cut into the one-piece upright marker. On the reverse side appear the words "Dedicated to the Confederate Soldiers of Southeast Missouri."

The monument was erected by J.B. Hoef and Ralph Thurmond of the Murphysboro-Marion Ill., Monument Works, the former drawing the design for the structure.