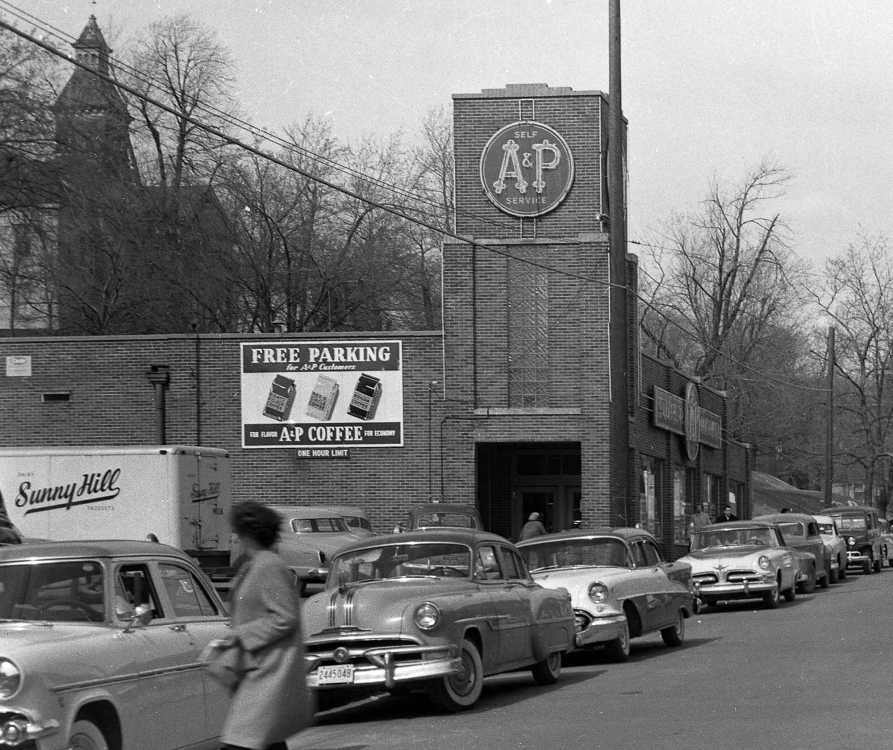 The Great Atlantic & Pacific Tea Company, better known as A&P, was photographed by G.D. Fronabarger in December, 1956. The store's popularity often caused traffic congestion on Spanish Street and back to Independence.

In 1941, The Great Atlantic & Pacific Tea Co. constructed the building at 19 N. Spanish St. in Cape Girardeau to house the A&P SuperMarket. Grand opening of the new store was held Oct. 14 of the same year. At that time, the store was the largest A&P store between St. Louis and Memphis, Tenn. With the opening of the new store, the company closed its other operations in town at 28 N. Main St. and 817 Broadway. C.A. Juden was commissioned to build the new one-story brick building, measuring 70 feet by 150 feet. On the southeast corner was a three-story tower that featured interior lights and a large circular neon sign. Across the upper facade of the building was a 35-foot neon sign. The store featured a large package cheese and dairy department and a 50-foot meat case and counter. The store stocked more than 2,500 varieties of grocery items. It was the first of the A&P stores in Missouri to have a collected group of fluorescent lights. There were five check-out stands. As cashiers checked out a customer, a receipt was printed with each item purchased and the cost. Customers could pay a penny for shopping bags.

The building is currently home to the Brick Street Gallery antique store.

[The A&P Super Market opened its second retail unit in Cape Girardeau on Aug. 2, 1967 at William Square, 2121 William St. The downtown A&P supermarket remained open until 1972. The new store on William was closed in 1977.]