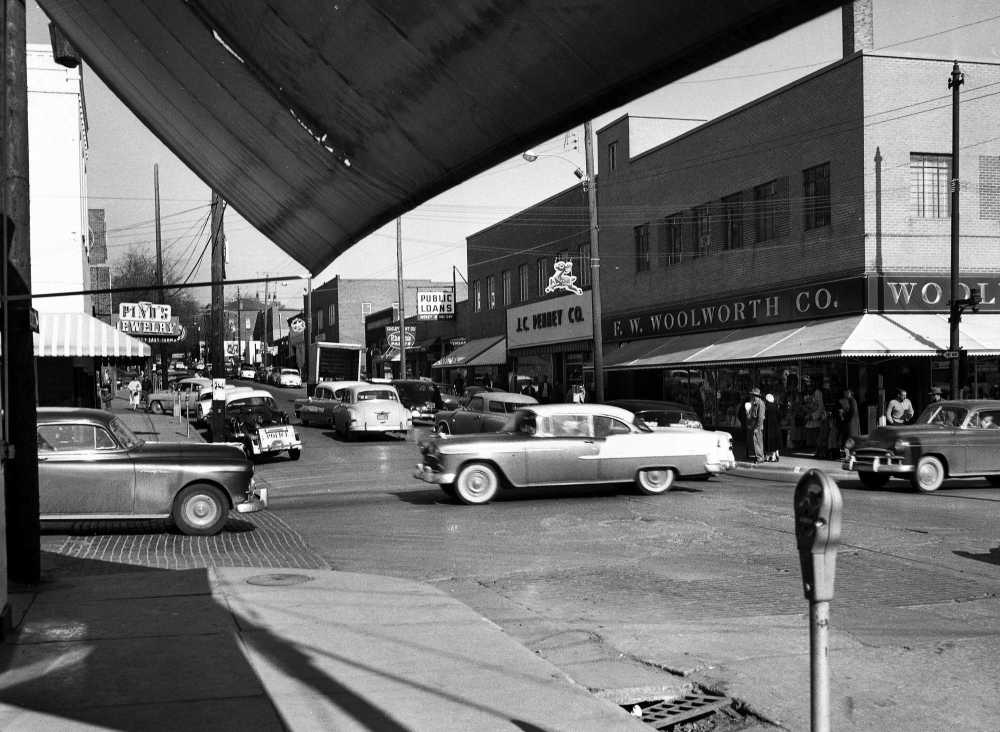 The Cape Girardeau police are doing some special checking on traffic at Spanish and Independence streets to determine if improvements can be made in handling traffic at the busy intersection. The picture was made Saturday looking north on Spanish. It shows some of the movement of vehicles, and some near the food store parking lot, where jams sometimes set up. (G.D. Fronabarger photo)

Police Commissioner John L. Wieser called attention to congestion on Spanish street at the A&P Co. store, particularly Saturdays, and submitted to the council a proposal drafted by Chief Percy R. Little which police believe will help the situation.

Commissioner Wieser said frequently motorists wanting to enter the store's parking lot halt in the right hand lane of one-way Spanish street, instead of moving into the left hand lane where they could turn directly into the lot.

Thus, he said, they block traffic back past the intersection while they wait for the left hand lane to clear. And, he observed, they stop and won't move, regardless of how many cars are behind them.

He said Chief Little was suggesting construction of a traffic island in the middle of Spanish street which would divide traffic at the parking lot entrance and prevent anyone in the right hand lane from turning left to get into the lot.

Councilmen said they thought the suggestion had considerable merit. It was, however, referred to the Traffic Advisory Committee for further study.

Mr. Wieser also called attention to a three-way stop at Independence and Spanish street to relieve confusion and congestion at the corner under the recently instituted one-way plan.

This previous blog features the lunch counter at Woolworth's.