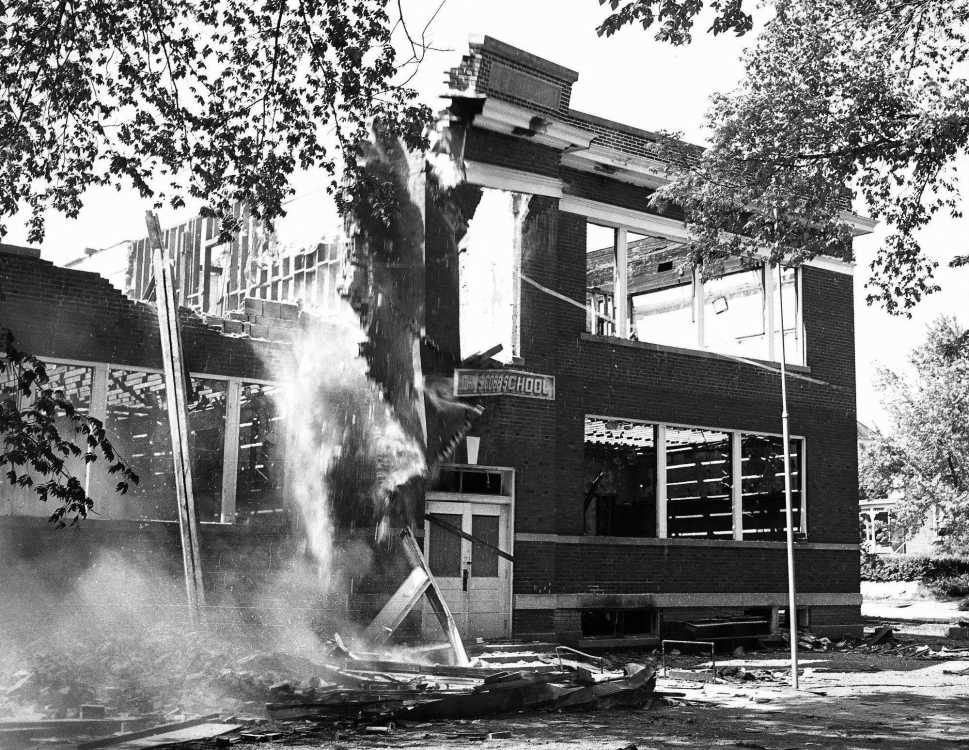 This photo shows the east section of the front wall of the 64-year-old John S. Cobb School building, 731 Merriwether street, being razed Wednesday. The building was torn down in a matter of minutes by the hitching of a tractor to cables tied around the walls. The east wall joins the gymnasium, which is still in use. The wrecking job was done by Dixie Contractors. Known in the nineties as Lincoln school, the name was changed in recognition of Mr. Cobb, who served it as principal and teacher for 38 years, thus earning the reputation of being one of the state's top Negro educators. Erection of a new building is awaiting the Supreme Court ruling on segregation. (G.D. Fronabarger photo)

The John S. Cobb School educated Cape Girardeau's black children from 1890 to 1953 when most it was destroyed by fire.

Six years after Cobb died in 1925, the Cape Girardeau Board of Education voted to rename the school in his honor.

At the dedication, it was noted: "It was only through hard labor, persistent study and a determined effort that Cobb rose from the ranks of slavery in which he was born to become one of the foremost Negro educators in Missouri. He was an ardent student, conversant with the classics and his personal library was an excellent one."

The school was not rebuilt, as the Supreme Court was on the verge of its landmark ruling that stated "separate but equal" was no longer appropriate in educating black and white students.

High school students finished the school year in the gymnasium which was not damaged by the fire. Portable partitions were built to divide the gymnasium into six classrooms.

Enrollment at Cobb School was 164 students with 52 in the high school and 112 in elementary school.