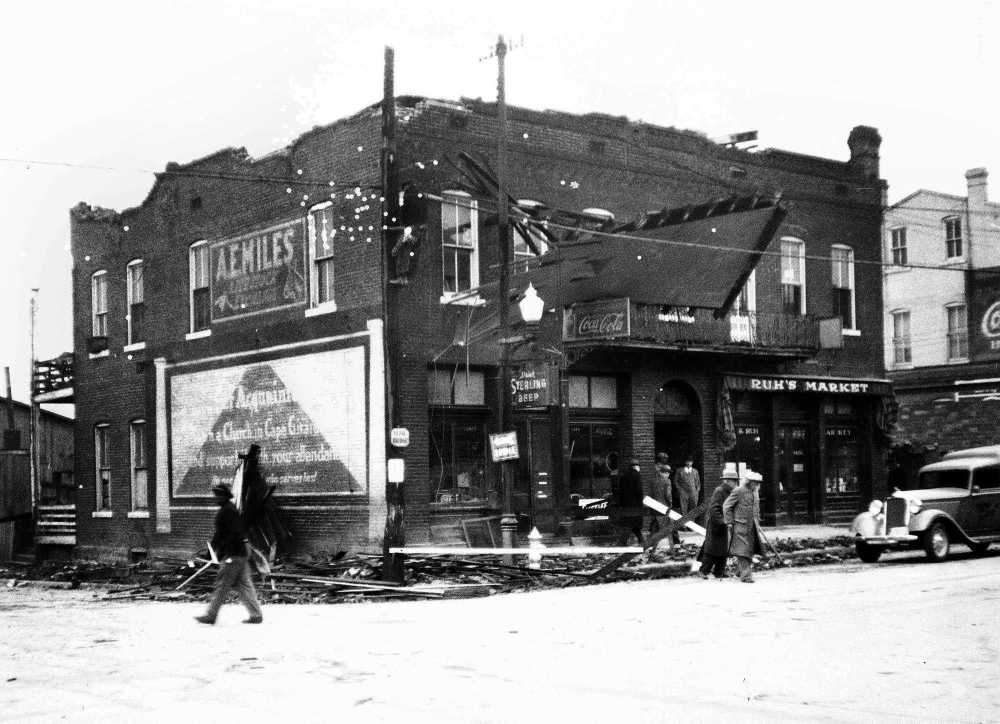 Gross & Ruh Market at the corner of Good Hope and Frederick streets lost its roof when a windstorm struck the Haarig district of Cape Girardeau. This is one of the earliest photographs taken by G.D. Fronabarger.

A terrific windstorm which at times reached cyclonic proportions struck the southwest and south sections of Cape Girardeau Monday night, venting its fury on the Good Hope street business section and causing damaged estimated at $50,000 to $75,000.

Sweeping out of the southwest in the midst of a furious summer-like rainstorm that at times reach the proportions of a gale, the storm dipped and rose from one edge of the city to another, hitting here and there with deadly accuracy. Roofs were torn off, garages tumbled over, an automobile turned up side down, trees were twisted off at the ground and sheet iron roofing material was tossed and twisted like so much straw.

Only one person, a woman, was reported injured, and she only slightly as a timber crashed through the top of an automobile parked on Good Hope street and struck her on the head.

The wind, lasting but a minute, roared out of the southwest and swept in a northeasterly direction through the city, starting in the extreme southwest corner and diminishing in fury as it crossed the Mississippi River between Independence street and the northern end of Smelterville suburb. The wind was accompanied by a heavy rain amounting to 2.02 inches.

Here is another photo of the storm damage on Good Hope from Out of the Past.