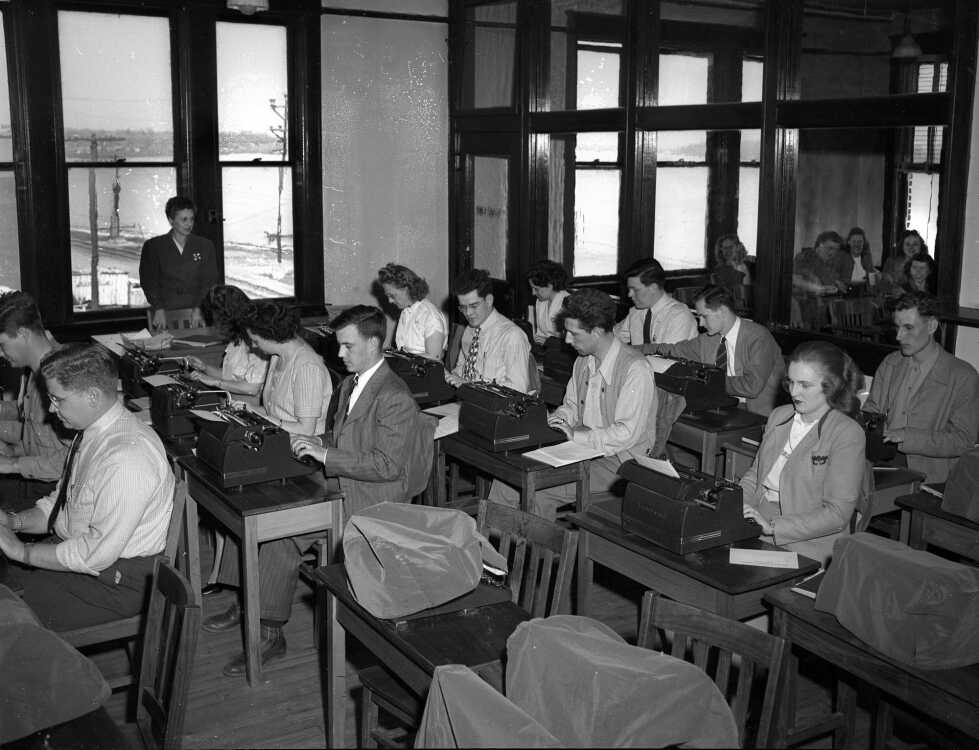 It's all business with these students in typing class at the Steimle Business School, except for a few in the back room as G.D. Fronabarger took this picture that was published April 19, 1947 in the Southeast Missourian. A few other photos at the school were used in the Know Your Schools feature.

The business school went by other names over the years:

Merger of Business Schools in Girardeau

Mrs. Emma Latimer, owner of the Latimer Secretarial School, 503 Broadway, purchased the Cape Girardeau Business College, located on the second floor of the Buckner-Ragsdale Building, corner of Broadway and Main street. The two schools have been combined and continued under the name of the Cape Girardeau Business College, with Mrs. Latimer as sole owner.

Mrs. Latimer's long experience in business college work assures the success of the school. Seventeen years ago Mrs. Latimer began her commercial college work as assistant to Mr. C.P. Coley, founder of the school, and served in this capacity for seven years. She operated a commercial school of her own at 222 Independence street for four years and then purchased half interest in the Cape Girardeau Business College with J.M. Sitze as partner. Later she sold her interest to Mr. Sitze and organized the Latimer Secretarial School at 503 Broadway and for three years operated this school quite successfully.

The merging of these two business colleges gives Cape Girardeau one of the best equipped commercial schools to be found anywhere. Mrs. Latimer's long experience and constant touch with the business interest gave her an added advantage to secure good positions for her students when they have completed their courses.

Here is an earlier blog with a picture of the business school overlooking the riverfront.