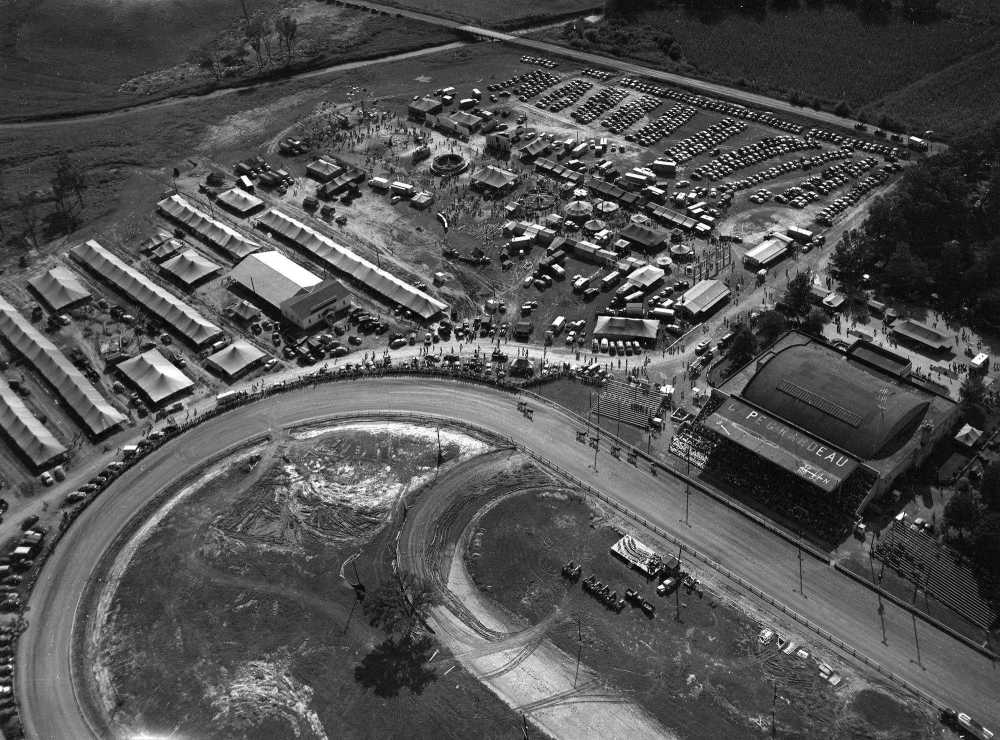 This aerial photo by G.D. Fronabarger of the SEMO District Fair is noteworthy for the air marker on the roof above the grandstand at the Arena Building. The undated photo was taken on a day of harness racing and may be from the 1940s.

The air marker shows the city's geographical coordinates: latitude 37 18 N and longitude 89 32 W with an arrow pointing north. Another arrow and a "5" points toward the airport.

The Southeast Missourian archives show other air markers were painted in the city:

TO HELP FLYERS--The large air marker for aviators who fly their planes over Cape Girardeau will be painted this week on the roof of the Groves Motor Co. building, North Sprigg and Themis streets. The letters, to be painted white against a black background, will be 12 feet high and seven feet wide.

Meeting Monday night, the board of directors of the Chamber of Commerce heard reports from committee chairmen, chief among which was one by J.R. Hoffman of the transportation committee, that arrangements have been made to place an air marker on the roof of Houck Field House, identifying the city to visiting airmen.

Wm. G. Maier Jr. and Mayor R.E. Beckman were appointed co-chairmen for a continuous campaign to seek new members. H.B. Newman was named co-chairman with K.P. Oldfield of the industrial committee. Wayne Rust, reporting for the Retail Merchants Association, said thus far 27 members have contributed $345 for a special activities fund and that the remainder of the membership will be contacted shortly.

Airplane pilots of Cape Girardeau and immediate area met Wednesday night at the home of Dr. and Mrs. D.B. Elrod, Karau Lane, formulated plans for a permanent pilots club, the function of which will be to promote aviation in this section, and discussed some problems pertinent to flying....

One of the things given attention was air markers for Cape Girardeau. There's but one left--painted on top of the Arena Building, the other marker disappearing with the burning of Houck Field House. Letters are to be addressed to owners of buildings here which have large roof areas, suggesting that these owners could advertise their business and the city with appropriate signs.