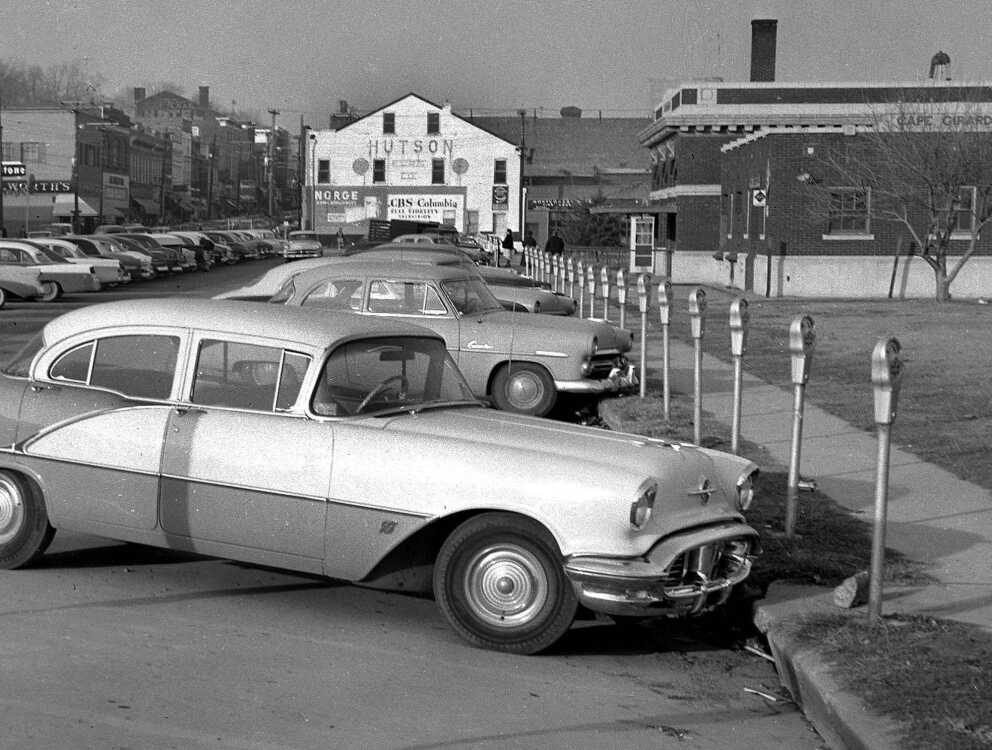 This photo by G.D. Fronabarger shows a line of parking meters that were added in the first block of South Main street in 1952 along the Frisco passenger depot.

The city of Cape Girardeau used parking meters for more than three decades. The city removed its parking meters in the fall of 1980, ending an era that began in 1948, when 425 meters were installed along Broadway and Main streets, and in the Good Hope shopping area.

By the early 1970s, the city had nearly 1,000 parking meters in operation. Over the years, however, motorists grew to dislike paying to park. Downtown merchants said the meters drove customers away.

By 1980, it also had become costly to maintain the meters and enforce the parking restrictions. The city council decided it was time to remove the meters.

The city even made money on its decision. It sold more than 240 of the meters to the public as collectors' items. The meters netted the city $2,273.

Mayor Hinkle Statler, explaining proposed installation of parking meters in certain business districts in town, says meters would not be placed with idea of bringing in revenue, but for purpose of relieving parking situation.

Informal Missourian poll of Main Street merchants and workers found that only slight favorable sentiment was expressed in support of installation of parking meters along street; however, those who are opposed are vehement in their opposition.

Resolution recommending to City Council that it have parking meters installed in main business districts on trial basis is approved by Retail Merchants Association; action comes after Mayor R.E. Beckman, at recent council meeting, said he had been contacted by representative of concern manufacturing meters, but had referred him to merchants organization to secure its recommendation.

After once petitioning city to install parking meters on trial basis, Retail Merchants Association, unless some member specifically requests it, plans no further steps toward acquisition of the traffic regulators; merchants passed resolution asking for trial installation of meters on Feb. 26; at its next meeting, City Council took no action on proposal.

Retail Merchants Association, without a voice of dissent being raised, adopted motion yesterday creating committee which will call on City Council next week to ask that parking meters be installed in main business areas of city; 22 business firms were represented at meeting and not single person spoke against meters; year ago in February, merchants made same request; at that time 10 merchants voted for proposal, three abstained from voting and eight had to leave meeting before vote was taken.

Retail Merchants Association, which thrice has butted heads with City Council over question of parking meters, met another stone wall yesterday, when, after more than hour of palaver, situation resulted itself in same futility as before; futile, that is, insofar as immediate action is concerned; this time council did promise to survey results and styles of parking meters in other communities and let retailers know findings in two or three weeks.

Parking meters, subject wrestled with by city councils for some 10 years, lack only official vote of becoming reality in Cape Girardeau, it appears in wake of calls by two salesmen on City Council yesterday; council took no vote on matter, but agreement in new commission, visible in comments and plans, left no doubt of intentions of members.

Back from tour of three central Missouri cities which have installed parking meters, Mayor Walter H. Ford waxes enthusiastic over findings made by himself and Commissioner Cleo Johns on benefits derived by residents, tradespeople, customers and cities themselves; two visited Jefferson City, Fulton and Columbia; at each of cities, Ford says they found nothing but satisfaction.

Take the word of Mayor Walter H. Ford, Cape Girardeau will have parking meters installed and in operation between June 1 and June 15; this is report he passed along to reporter who accompanied mayor and Commissioner Charles Schweer yesterday to three cities in Kentucky and Illinois having parking regulators; meters were inspected at Paducah, Ky., and Marion and Carbondale, Ill.

Mayor Walter H. Ford has appointed Troy Propst as police officer with rank of patrolman to be in charge of maintenance of parking meters when they are installed here next month; when parking meters arrive, Propst will assist with installation of meters and will be trained in their operation.

Approximately 350 parking meters, purchased for Cape Girardeau, will be in operation by June 23, says Mayor Walter H. Ford; drilling in sidewalks for installation of meters will begin next week in three business sections of town.

Cape Girardeau's parking meters will be put into operation Monday, says Mayor Walter H. Ford; pennies and nickels will be used; all meter stands having been cemented into place, workers start mounting meters on stands in morning; paint crews are working each night outlining parking stalls at curbs; although meters will be in operation Monday, there will be seven-day grace period before citations for violations will be made.

City has purchased three-wheeled motorcycle to be used by Patrolman Troy Propst in serving parking meters and citing violators; vehicle, which has large compartment in back for spare parts, was purchased at cost of $840 from Joe D. James; vehicle will also be used to help carry patrolmen to their beats, releasing the police car for other duties.

Laborious hand counting of thousands of nickels and dimes collected in parking meters has been solved by city officials; counting machine, costing $186.10, has been purchased from company which sold city the meters.

Cape Girardeau's parking meters, their value proved, have passed six months trial test and are permanent part of city's physical properties, says Mayor Walter H. Ford; in keeping with agreement with company from which they were purchased, city has notified firm that meters will be retained.

Everybody's happy over city's parking meters, but no one is more pleased than city officials, who, just over year ago, saw sentinels installed and today look back on 52-week collection of $30,189.60; that amount has been major difference in keeping city running in black ink in current fiscal year, despite heavy expense from tornado; but even more important, meters, source of controversy before installation, have served to allay ruffled tempers of motorists who now can find parking space without merry-go-round ride in business sectors.

Three months ahead of schedule, Cape Girardeau becomes sole owner of its parking meters; official action is taken by City Council in morning when it approves final payment of $3,240 to Magee-Hale Park-O-Meter Co., of Oklahoma City, Okla.; hereafter, beginning with next Thursday's collection, city will keep all receipts from meters; normally, city wouldn't have completed payment for meters for another three months.

Resumption of two-way traffic on Fountain Street from Broadway to Themis and installation of limited-time parking meters on post office side of street will be recommended to City Council, Traffic Advisory Committee decided last night; previously, committee had suggested, and council ordered, that parallel parking be substituted for angle parking on street, practice now followed on west side.

Designed to provide more parking spaces around post office, limited-time parking meters are placed on sections of Fountain Street and Broadway near Federal Building; they will limit parking to 10 minutes.

Acting on recommendation of municipal Traffic Advisory Committee, city council Monday authorized immediate order of 50 additional parking meters to be placed along divided section of South Main street from Independence to Merriwether; it is hoped meters will be installed in time to care for part of Christmas rush.

Sixty-five new parking meters ordered by city have arrived, and it is expected installation will begin at once; 56 of meters will be placed in first block of South Main street, between Independence and Merriwether; meters will be erected on both sides of each lane of divided-pavement street; remaining meters will be installed at various points in city's business districts.

The Cape Girardeau City Council has signed a contract with the Magee-Hale Park-O-Meter Co. for 159 parking meters, 155 of which will be installed on Main Street and the other four near Courthouse Park; the 155 meters will be installed in the area on South Main Street from Independence Street to William Street, with some of them going to the new parking area to be built between Independence and Merriwether streets.

Parking meter enforcement in Cape Girardeau reached new heights during past fiscal year when record $3,526.79 was paid in fines; parking meters have lined city business streets here for 18 years -- first ones being installed June, 1948 -- and have been responsible for enriching treasury by more than $690,000.

Today's modern, 18-foot long cars won't fit into 15 to 17-foot parking spaces along business district on Broadway; city workers will have to reset almost all parking meters on that street and few others elsewhere when weather allows.

Time is running out on about 400 Cape Girardeau parking meters; more and more often, the red "expired" flags describe the condition of the devices, because the city has discovered that spare parts for the meters can no longer be purchased.

University officials decide to remove the parking meters that have been in place for the past three years in the 900 block of Normal Avenue, on the Southeast Missouri State University campus.

"Feeding the meter" is a thing of the past in Cape Girardeau; the city council has unanimously decided to discontinue the use of parking meters throughout the city; the decision follows a request from the Cape Girardeau Metro Association that meters be removed from the downtown area.

The days of "feeding the meters" in Jackson are gone -- at least for three months; beginning today, parking in the central business district is free; following in the footsteps of the Cape Girardeau City Council, which eliminated all parking meters in the city last month, the Jackson Board of Aldermen last night unanimously agreed to tape up the meters for a three-month trial period.

The city of Cape Girardeau sold 243 of its old parking meters yesterday and today, netting the city $2,273; not only did people from Southeast Missouri take advantage of the sale, but so did meter speculators and antique dealers from as far away as Florida and Wisconsin.

By order of the Jackson Board of Aldermen, that town's parking meters will be coming down within the next few months; the board adopts a motion calling for two-hour free on-street parking and a $5 fine for exceeding the time limit.