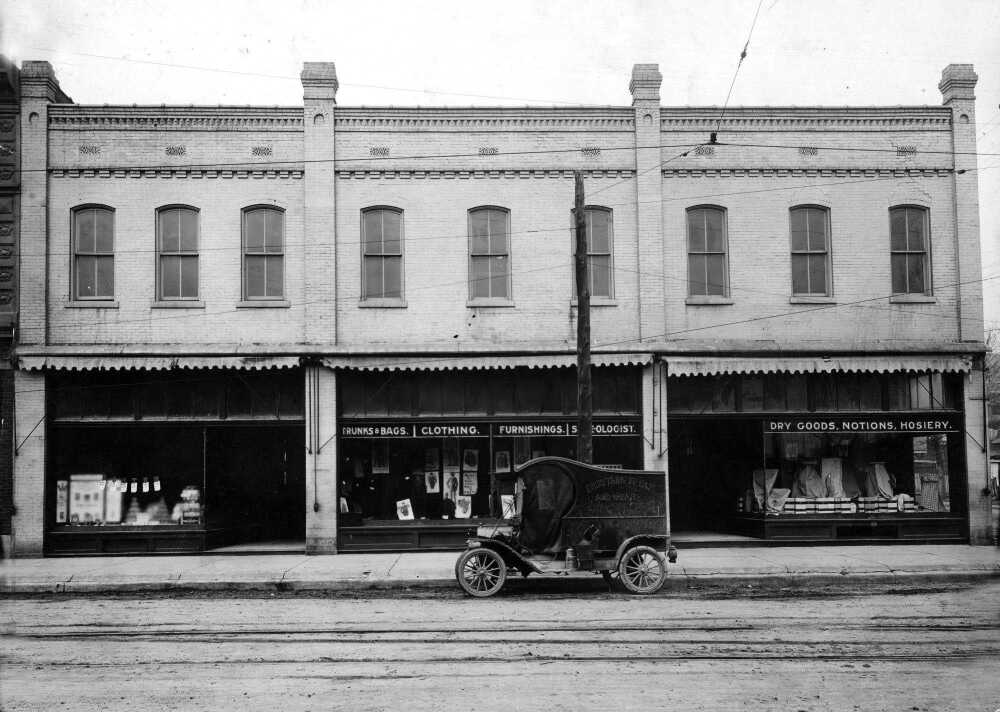 [This building, on the southwest corner of Spanish and Independence streets, was destroyed by fire in 1989.]

"Everything to Eat and Wear"

The other day The Republican had a little local, saying that an announcement would be made today that would be a surprise to the commercial interests of the town. The announcement appears in this issue in the form of a two-page advertisement for the Bee Store. This well-known old establishment is to retire from business and the stock will be offered at special sale beginning next Wednesday.

Judge Klostermann established the Bee Store nearly 23 years ago and it has for years been known throughout the county as one of the leading stores and the discontinuance of it removes one of Cape Girardeau's landmarks.

Shortly after the death of Judge L.F. Klostermann it was reported that the Bee Store company would remodel the building and go after business stronger than ever. Then after considering the great responsibility that a continuance of business would mean to her, Mrs. Klostermann decided that it would be the best to close out. The store for a long time had been under the management of John Klostermann and Louis Ische. Mr. Ische has been with the store for over eleven years and through his ability and geniality has made many friends for the store.

The store will be closed Monday and Tuesday for the purpose of preparing the big stock for the sale, which will start at 8 o'clock Wednesday morning.

Klostermann's Bee Store may have ended, but the name lived a little longer.

Your dollar looks big as it comes into this store. The one in the picture has legs on it, showing that it goes a long way. For a general stock of groceries of tested merit we believe that our store cannot be outclassed. As we do a large cash business our prices are always at the bottom of the market.

We will deliver all orders, no matter how large or how small. No store could be kept more sanitary than ours.

In 1918 the Bee Store Company was bought by Nussbaum's Conservation Stores which turned it into a "cash and carry" grocery store.

Nussbaum opened a second grocery store at No. 1 South Spanish and Bee-Fulton Market was located at 5 South Spanish.

An entirely new system of grocery business is to be started in this city, featuring mainly cash sales and no deliveries. H.A. Nussbaum is the promoter of this new idea, and its principles are embodied in the new store which he is installing at 614 Broadway, and which will be ready for business in a few days.

It is to be called the Nussbaum Conservation Store, because it follows very closely the outline of Hoover's conservation policy as regards his prices and amounts of certain goods to be sold.

Mr. Nussbaum expects to run the new business on the "cash and carry" plan as he calls it, the low prices of the goods being the crowning feature of the whole system, for he asserts that the goods in his store will sell at least from 5 to 10 percent below what other stores ordinarily sell at.

The economic way the store is to be run, or the conservation system, as its name really implies, is the means whereby the proprietor can manage to sell as such low prices.

In short, it amounts to this. Everything is to be done up in packages, and placed on shelves with the amount and price on it.

The customer takes a basket from the bin after he enters the door, passes up and down the aisles, picks out what he wants, places it in the basket, and takes it to the cashier's desk where the articles are counted up and paid for. The groceries are then put in a paper bag and the basket is returned to a bin for other customers to use.

Of course a person may bring his own basket, or baskets may be bought from the store for three cents, and later returned and the three cents refunded if so desired. In this way, every person is his own clerk, the cashier is practically the only one who is needed besides a stockman. Deliveries are eliminated, and no clerks are needed, thus reducing the running expenses of the store, which gives the people the benefit of lower prices on the groceries.

This system is also more sanitary, for everything, with the exception of a few vegetables, will be done up in bags and packages, thus protecting it from the dust and unnecessary handling.

These stores have proven a great success throughout the country wherever they have been tried, and as soon as this one gets well under way, Mr. Nussbaum expects to install more in the other business section of the town.

He also states that he will in a few days announce the opening date when the store will be ready for business, and invites the people of Cape Girardeau to bring their baskets and inspect his Hoover wares and the system.

In 1905, a two-story brick commercial block of four units was constructed by the Klostermanns on the south side of the Bee Store. Known as the Klostermann Block, it is on the National Register of Historic Places. This pdf file has more details of Louis Klostermann's history and business interests.

Ken Steinhoff has more about Louis Klostermann and photos of the Klostermann Block in his blog:

A two-alarm fire early in the morning destroys a landmark downtown business building; the blaze, of undetermined origin, destroys Uncle Ralph's Furniture and the building it was in at the southwest corner of Spanish and Independence streets; the building was more than 100 years old.

Uncle Ralph's Furniture was destroyed in the two-alarm fire on June 2, 1989. Before that, the building was mostly used as a furniture store, dating back to 1920 with Jones Furniture until 1962. From 1967 to 1978 it was a used furniture store by Hutson Furniture Co. until Jim Palmer leased it in 1979 as Uncle Ralph's. 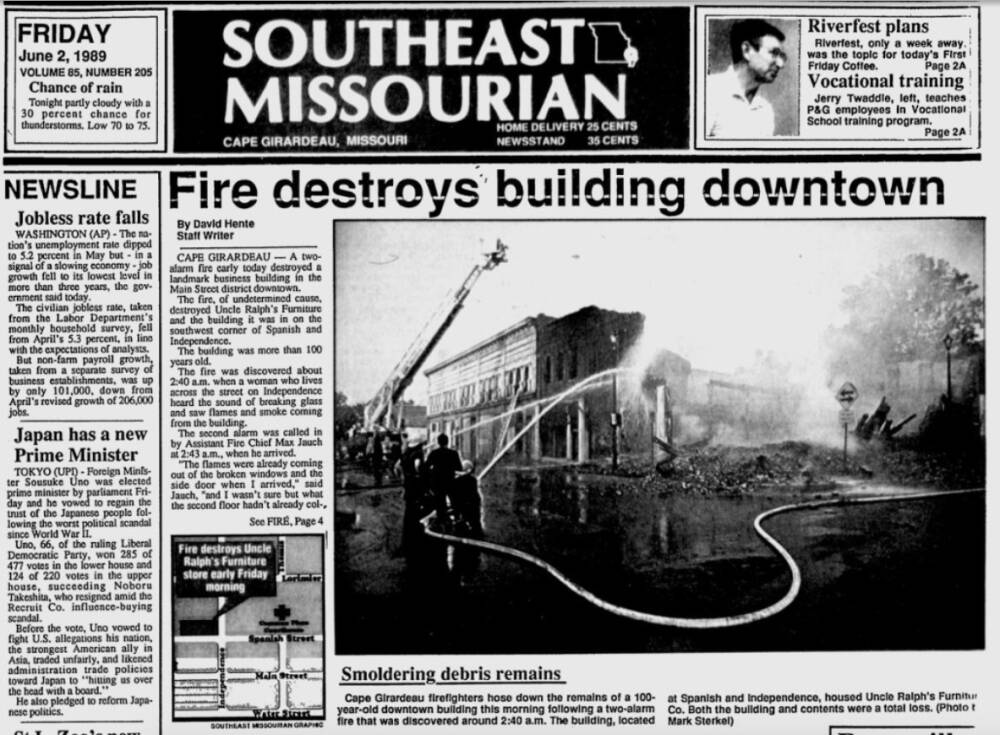 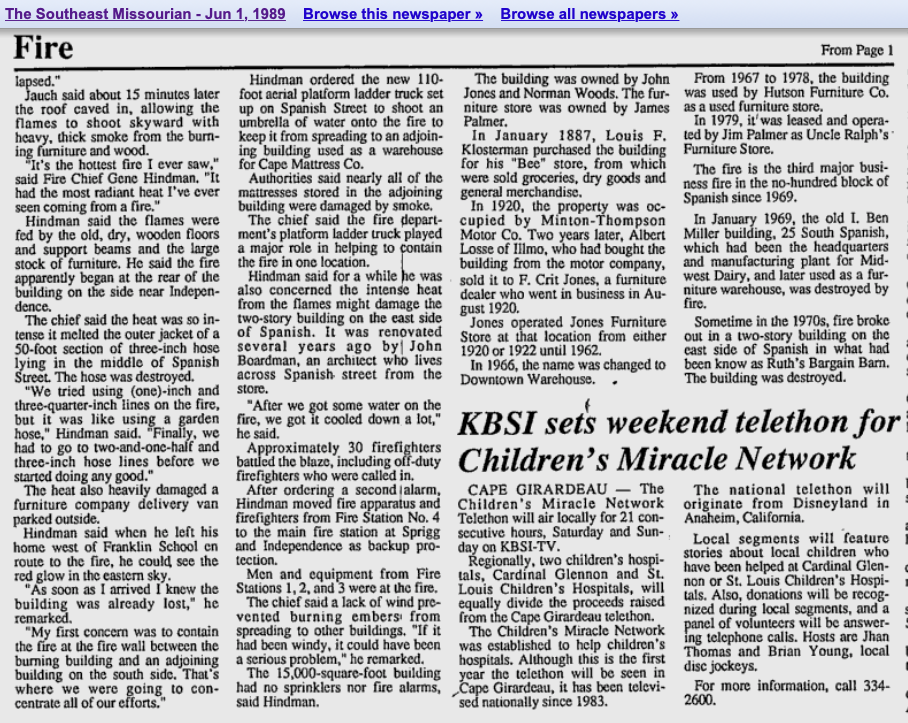 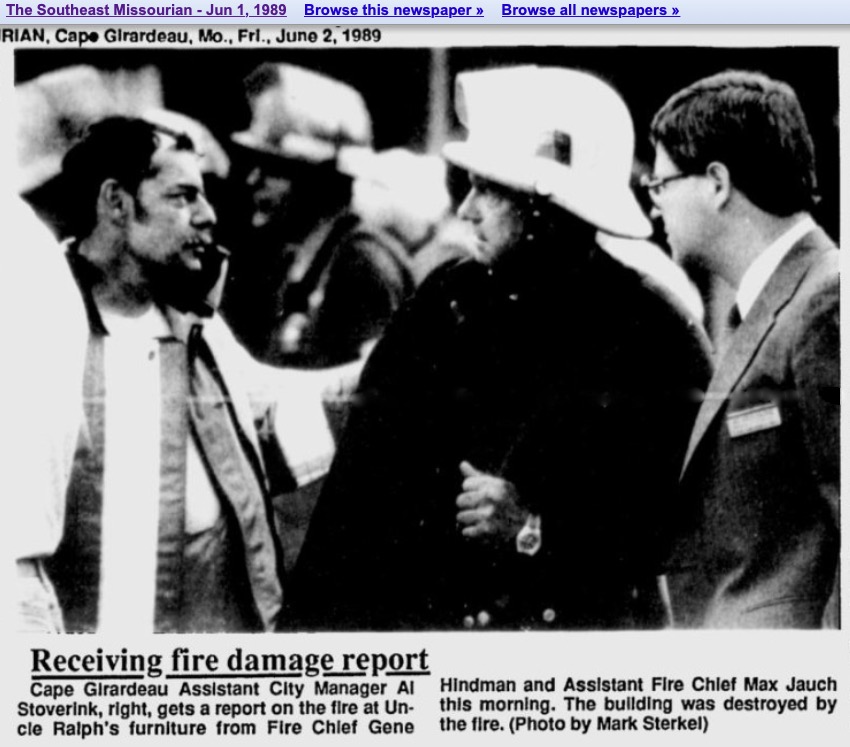