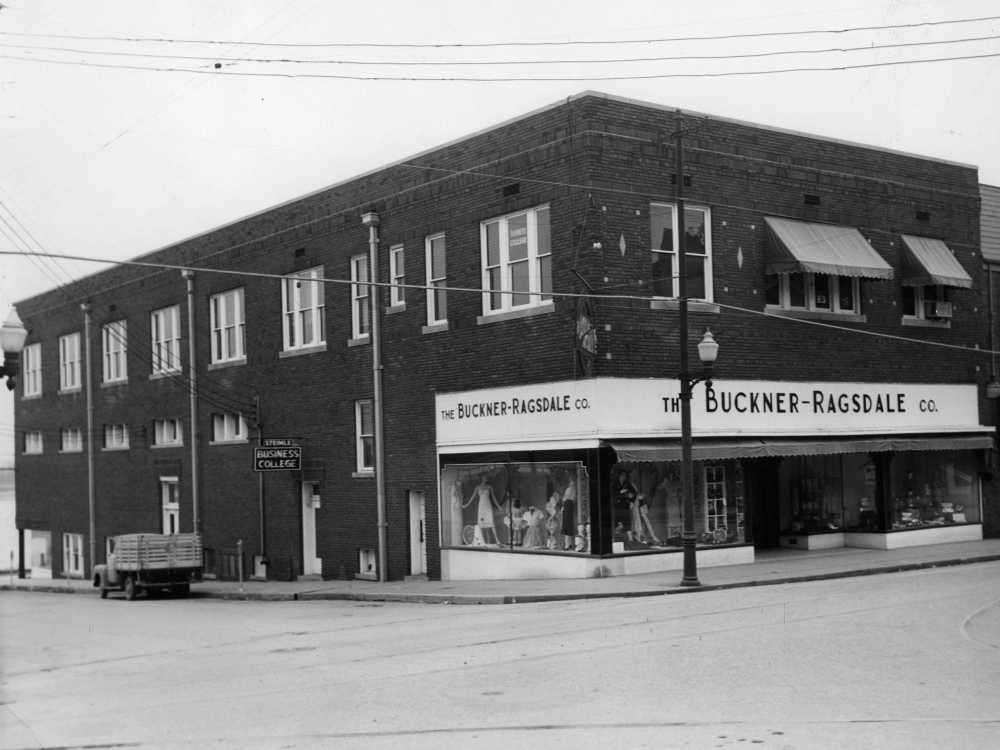 In its 25th year, Buckner-Ragsdale was featured in a story on the front page of the May 25, 1932 Southeast Missourian:

May 24, 1907, The Daily Republican which later became The Southeast Missourian, announced that a young man by name of W.B. Ragsdale, of Centralia, Mo., had bought the E. W. Flentge & Co., stock of general merchandise and would establish in Cape Girardeau a ready-to-wear store for men, women and children, the first of its kind in Missouri south of St. Louis, and to be known as the Buckner-Ragsdale Co.

Tomorrow, this same institution will begin the observance of its 25th year with a Silver Anniversary Sale. It is not often that the Bucker-Ragsdale store has a special sale that covers the entire stock, it being contrary to the policy of the institution to advertise "sales" unless there is a particular reason. It frequently has special clearance sales of particular lines of merchandise and uses this plan rather than letting goods pile up and then clearing them out in one big sale.

According to the newspaper story, Mr. Ragsdale was interested in Southeast Missouri because he had a girl friend at Charleston. That town offered no opening for a ready-to-wear store and it was easy for Cape Girardeau to get his attention. He might have figured that on Sundays, when conditions were just right, he could hire a team and buggy at the Kage livery stable and drive down to Charleston in 8 or 10 hours. It was because Charleston was 35 miles away, and it was necessary to traverse some fearful swamps.

At any rate, Mr. Ragsdale bought the Flentge & Co. stock and shortly thereafter he married the girl friend in Charleston. The Flentge store carried dry goods, shoes, clothing and groceries. It was a typical crossroads store. Buckner-Ragsdale Co. had had no experience with groceries and dry goods, so they traded the dry goods to the D.A. Glenn store for its stock of women's shoes, and the groceries were sold to another store, leaving only men's clothing and shoes to be sold at a big sale which started June 7, 1907. The sale of the Flentge stock was advertised far and near and, as everybody knew the Flentge store, the event brought a big crowd to town and proved a great success.

The store then closed up and was remodeled and turned into a men's and women's ready-to-wear store. On August 30, 1907, the announcement was made in the newspaper that the new store would be open Sept. 3. A public reception was held that evening and the next day the store was open for business with the first line of ready-to-wear dresses ever displayed here.

R.E.L. (Bob) Lamkin had finished school about that time and went from his home in Marshall, Mo. to St. Louis to accept a job as a drummer for a wholesale house. But a member of the Buckner family persuaded him to go to Cape Girardeau for the opening of the new store. Mr. Lamkin arrived in Cape Girardeau the day before the opening, was enthused over the big reception and when customers crowded the store on the first day, he agreed with W.B. Ragsdale that his would be a good location for him, so he took an interest in the concern and remained here to assist Mr. Ragsdale in its management.

Buckner-Ragsdale stores were later opened at Charleston and Sikeston.

When the new ready-to-wear store was opened, many predicted it would fail because no woman wanted "hand-me-down" dresses and most men preferred tailor-made suits. At that time Cape Girardeau had some magnificent dry goods stores. In the same block was the Caldwell store, and in the next block was the Glenn store, the Peironnet store, the W.H. Bohnsack store and around the corner was the Bee Store. Also there were dry goods stores on Broadway and Haarig and all carried large stocks. The ready-to-wear business became the vogue and within a short time the other stores had stocks and other apparel for women.

The Buckner-Ragsdale store was burned out in 1908 and was then rebuilt especially for the business.

W.B. Ragsdale's uncle, W.C. Buckner, had an interest in the three stores in Southeast Missouri.

Buckner-Ragsdale Co. closed in 1982 after 75 years in business. R.E.L. Lamkin, Jr. was president of the store at that time.

In the Aug. 19, 1982 edition of the Southeast Missourian, Lamkin said there was no single reason for the closing.

"It's a combination of several factors," he said. "The most important factor in my opinion is the recession." He also directed some of the blame toward expanding retail development on the city's west end, West Park Mall in particular.

"Anytime, particularly in a declining economy, that you introduce 60 additional businesses in a town this size it affects everyone," he explained.

The Cape Girardeau store had about 30 employees. The stores in Charleston and Sikeston remained open.