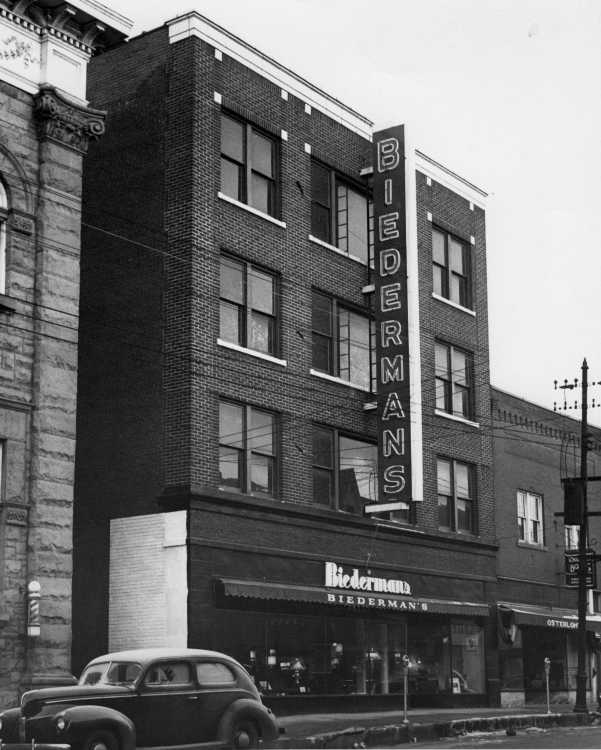 Biedermans furniture store, 119 N. Main St., was photographed by G.D. Fronabarger in the 1950s. Here is a reader advertisement from the Aug. 29, 1950 Southeast Missourian:

Joe Ravenstein to Return to Cape With Biedermans

Many folks in and around Cape will be glad to know that Joe Ravenstein is coming back to town with Biedermans new store. Joe will be the assistant manager of Biedermans new furniture store.

You might remember Joe Ravenstein from his days at Central High...or maybe further back to May Greene Grade School. Joe has come a long way since then. He had put a lot of furniture experience under his belt, having been in the business for 18 years...13 years with Biedermans.

Joe will take up his residence at 1469 N. Water St. His wife Pauline will be glad to get back to Cape, also. She's a Cape girl...you might have remembered her as Pauline Deen. Her parents, Mr. and Mrs. Charles Deen, still live here in town.

You'll probably want to renew old acquaintances with Joe Ravenstein when he's back in Cape at Biedermans new store. He'll be glad to see you...and he'll be more than glad to help you with your home-furnishing problems which will be easy to solve at Biedermans.

Yes, Joe has learned a lot about furniture since he's been away from Cape. He has contributed to the growth of Biedermans through his diligent efforts and his ability to do a lot more than his job has required.

Many new innnovations in the operation of the Biederman Furniture Co. have been advanced by Joe Ravenstein. Biedermans couldn't find a better man than Joe Ravenstein to be their assistant manager...especially here in Cape Girardeau.--Adv.

Biedermans opened a new store in 1966 at 2103 William St. across from Town Plaza. The building was double the size of its Main Street store which remained open at the time.

The Libson Shops store, 113 N. Main, moved to the former Biederman building in 1968.

Biedermans new owner-managers say: "We're here to stay and we're going to prove to you that Biedermans is the place to save on all your home-furnishing needs!"

After 88 years of faithful service...GOING OUT OF BUSINESS! Flooding the mind with memories (now regret) for all the Biedermans team and treasured customers. For you, however, it's one of America's great opportunities...to save!